There are lovers quarrels… and then there are the times your wife’s arms morph into metallic, Terminator-like talons so that she can slice and dice you like a mandoline.

The latter flavor of fracas is what went down this week on The CW’s The Flash, once Barry confronted “Iris” with the fact that she is not his actual wife. TVLine spoke with Candice Patton about her villainous arc, not getting to beat herself up, and what turned out to be her “hardest” scene ever on the six-season-old series.

TVLINE | For starters, I am compelled to ask: What did you possibly look like miming this fight, before any of the visual effects got put in?
I can’t imagine that I looked cool at all. [Laughs] I’m just thankful that we had a crew that didn’t make fun of me.

TVLINE | Did it require an heretofore untapped commitment to your craft?
You know, it’s something that I rarely get to do on this show, so for me it was probably one of the funnest thing I’ve done on the show thus far, and definitely this season. I like being physical, and though I remember that at the end of the day my body was in such pain from doing all those movements over and over again, it was one of that exhausted that feels good, because I was doing something I really love doing. It was a challenge for sure, but a lot of fun.

TVLINE | I have to say, Mirror Iris had some bush-league moves there, using nearby mirrors to poke poor Barry from behind.
Yeah, it was kind of brutal. When they were going over the choreography with me, I was like, “Can we do this on our show…? This seems like a pretty brutal thing to be doing to our beloved title character.” But it’s also pretty ingenious, how they thought of all the mirror stuff, and the one crashing down from the ceiling….. When it was explained to me, I was like, “This is dope. This is really, really fun. They’re putting a lot into this fight sequence.” 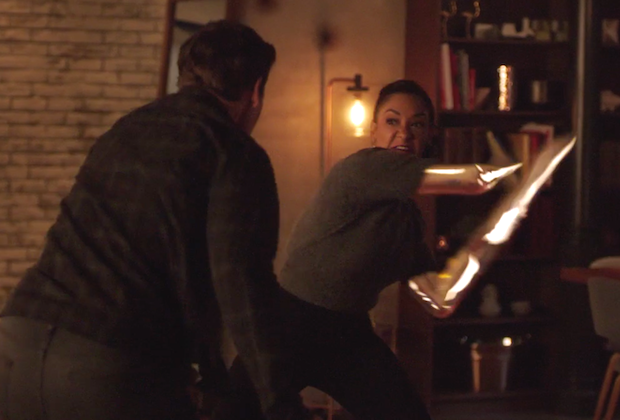 TVLINE | It was extremely visceral, especially that one point where she slashed his cheek and blood went flying.
That was probably my favorite move, the cheek slice.

TVLINE | What had been your approach to Mirror Iris versus simply playing The Evil Doppelganger?
Well, I wanted her in the beginning to appear — to the audience and also to Team Flash — as close to Iris as possible. Though obviously, the longer she was controlled by Eva, we saw the evil tendencies slip out. For me, a lot of it was in the writing. Also, I remember early on wanting her wardrobe to be different from Iris. I wanted to imagine that Mirror Iris has gone into Iris’ closet and was like, “God, she’s got all of these great clothes and she dresses like a mom now.” You see Mirror Iris almost dress like the old Iris in a way — the sassier, sexier version we knew early in the show. Once I started dressing like that, it helped me inform the character, too.

TVLINE | In your mind, what cycle of feelings did Mirror Iris go through in her final minutes?
You see her really struggle with this human quality and wanting to be alive and wanting to have this life that Iris had. That’s the great thing about this “villain” — I’m really grateful that even in her final moments they showed her having these human desires and emotions.

TVLINE | There was something almost Pinocchio-like — “I want to be a real boy” and all that.
Right, and you empathize with her in the strangest way. I mean, she’s so terribly evil, obviously, doing all these things based on Eva’s will, but I thought it was beautiful that they gave her that last moment. I was grateful for that because I spent so much time playing her. I think it was good send-off. 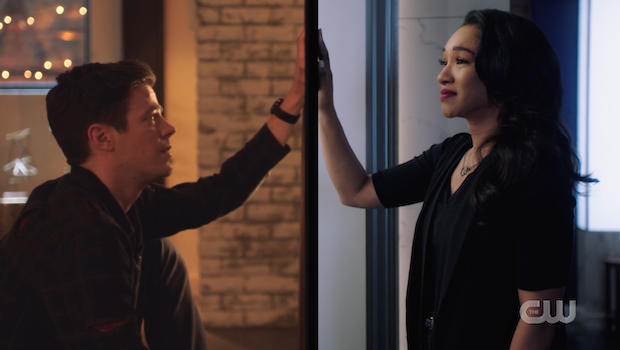 TVLINE | For that closing scene, were you or Grant [Gustin] just off camera for the other, as Barry and Iris spoke to each other?
No, we shot all of that completely separate, on different days. That scene for me was probably the hardest scene I’ve ever shot on the show, to be honest. I really struggled that day.

Just in general playing Mirror Iris, you’re dealing with a lot of mirrors you’re playing against. And it’s a very strange thing to be looking at yourself and trying to have a conversation with somebody that’s not there. We do it often on our show, but usually you’re looking at, like, a tennis ball or a green screen. But to be looking at your reflection, and to be trying to be thinking about Barry but you’re seeing cameras in the background, and your sound guy, and the wardrobe person…. There’s a lot of distraction happening there. I was able to navigate it in previous episodes, but that particular scene was so emotional and so important, it proved very, very, very difficult. I remember leaving work that day and being like, “[Sigh] I didn’t get it. We didn’t get it.”

TVLINE | I’ve had a lot of readers emailing me over the weeks, asking if Iris would face off against Mirror Iris. Are you at all disappointed you didn’t get to kick your own ass?
Yeah, that would have been pretty cool, but also that sounds very difficult to shoot. [Laughs] I kind of thought that would have been the fight that ended it all, but I think it’s cool to see Barry and Iris fight. I mean, when else will you ever get to see that on a show?