Put yourself in analysis mode… and prepare to stay there for some time.

Westworld‘s Season 3 finale Sunday night answered a few kilobytes of questions (ah, so that’s what Park 5 is!) but posed a terabyte more. At its heart, though, we learned (I think?) that Dolores hasn’t been quite the big bad we thought she was, and that Caleb’s got a bigger role in all of this than previously thought.

Read on for the highlights of “Crisis Theory.”

MOVING RIGHT ALONG | After a bunch of Dolores flashbacks, we see her bleeding and one-armed on the floor next to an inactive Solomon. There’s a lot of blood, and Maeve is still there next to her. A man comes in. We’ll get back to them in a moment.

A FAMILIAR FACE | William (in white) still has Bernard and Stubbs at gunpoint. He says he knows Dolores just “wants to burn all this to the ground. Time to atone for my sins,” and then he shoots Stubbs. Bernard switches himself into badass mode and gets the upper hand, slamming the older man to the ground. Just then, the police show up. Bernard lets William slip away. Bernard starts to fight them, but they stop him. And when one of the cops takes off his mask, he’s Lawrence. Bernard assumes he’s another Dolores. Lawrence gives him a briefcase with “something to help you on your journey,” but says he has to go see “her” first. Then he gives him an address and wishes him well, because “things are about to get dangerous.”

William later learns that, given the fact everyone thought he was dead, it’s not as easy to access his money as it should be. But he doesn’t care: He wants access to his jets, because “I’m going to save the f—kin’ world.” 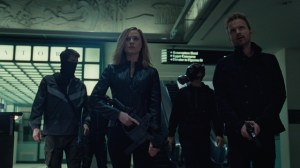 I’VE GOT YOU UNDER MY SKIN | Caleb is on a motorcycle, speeding along an empty highway. He follows navigation to the distillery, where he finds a shipping container hidden behind a locked door. The bag inside says “Property of Delos,” and when he unzips it, he finds a Dolores host with flesh on only the face, neck and clavicle area. He delivers a consciousness orb right into her face, and she comes back online. “I’m just someone who didn’t want to play the role they gave me anymore,” she says when he asks who the heck she is, adding that the same people are behind both of their programming: When the government wanted the military to train on live targets, they used “Park 5.” And the helmet Caleb wore during that training catalogued his every move, the same way Westworld and the other parks catalogued their guests.

Oh, and we see that Caleb’s soldier friends were super into the idea of having their way with the female hosts they “saved” during the simulation. As Dolores slips back into her skin — such cool visual effects in this scene, by the way — she informs him that the people who tried to control them think humans don’t have freewill. But they were wrong, she says, and then offers him the chance to free everyone else.

MAEVE’S BACK ON THE CASE | Meanwhile, Serac tells Maeve that Dolores has ruined the perfect world he created (cough by killing his brother cough) by unleashing all of the outliers, who’ll do the actual destroying. After realizing that Caleb has Dolores’ consciousness, Serac sends Maeve back out to find her.

Out in the world, Caleb notes the riots happening around them and wonders if it’s a good idea to continue on their plan. “Change is messy, difficult,” she says as they strut past a burning car. (Ha!) They meet up with some more men, but then Charlotte appears only to Dolores and gloats as a sniper starts firing on her men. She mentions “consolidating,” then Dolores’ eyes go all glowy, and Charlotte disappears. Dolores sends Caleb on to upload something into Rehoboam, then does a whole lot more shooting… eventually winding up opposite a blade-wielding Maeve.

Maeve wants into Dolores’ mind. Instead, Dolores shoots a ton more people and jumps off an overpass. Where she… apparently waits for Maeve to find her so they can have a kickass fistfight? OK sure! ” Eventually, Dolores is positioned for the kill shot — er, punch — but she lets Maeve go, saying she’ll stay out Maeve’s way “as long as you don’t try to stop me.”

NOT GIGGLES! | Caleb eventually finds himself in the middle of a police/protester standoff. He runs into Ash and Giggles, who are in the thick of things. They help him get close to a police drone — which is his only hope of getting close to Incite — but Giggles takes a police bullet in the chest along the way. Ash stays behind, urging Caleb to “burn that s—t down” when he reaches his destination. 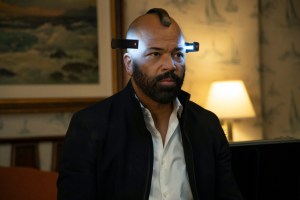 CLOSE ENOUGH | Stubbs is bleeding heavily in the back of Bernard’s car when they arrive at the address Lawrence gave them. A nurse/attendant answers the door and says she recognizes him from pictures, and that he’s in luck: It’s one of “her” good days. Turns out, the “her” is Arnold’s wife, only much older than she appeared when she showed up in Bernard’s backstory flashbacks. (Also, yay for a Gina Torres guest spot!)

“I think about him every day, Charlie,” Bernard tells her, referencing Arnold and Lauren’s dead son. He starts to cry, and she reaches out a hand. “It’s OK, Arnold,” she says. She talks about how the memory of their son was the only thing that kept her going at her lowest points.

Later, Bernard brings Stubbs to a motel and stashes him in a tub full of ice, telling him they don’t have a lot of time left. Bernard somehow knows that Dolores is gone. “We were always bound together. Something’s changed. I misjudged her,” he says. “She wasn’t trying to save the human race, she was trying to save it.” And guess where the key to the Delos Immortality Project/The Sublime is? In Bernard’s mind. Stubbs wonders what he’s looking for there, and Bernard replies that he’s searching for what comes after the end of the world.

Then, while Stubbs watches, Bernard accesses The Sublime… then slumps over.

CLOSE ENOUGH | Serac hooks up Dolores to his computer and demands she give him the key to the Delos Immortality Project. She refuses, so he has a tech go through her memory and destroy it, moment by moment. Nearby, Maeve watches, upset. 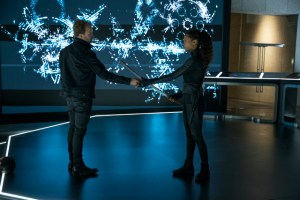 After more shooting, Caleb infiltrates the Incite building. He’s just about to upload the strategy Dolores gave him when a thug with a choking wire interrupts; Caleb wins that fight, but Maeve and her sword show up soon after. She demands the file and he gives it to her, then marches him to where Dolores is hooked up.

When he sees Serac, Caleb angrily confronts him. “You’re a thug who destroys people’s lives!” he says. But the gazillionaire counters that Caleb has no idea who he truly is — though Dolores does. He prompts him to ask Rehoboam what will happen if Dolores’ strategy is uploaded. The answer? Population collapse and the end of human civilization. Caleb can’t believe that he was part of that plan, and he looks gutted as Serac takes the file.

But wait, Maeve has made a big realization: Serac is merely a puppet of Rehoboam. She calls him out on it and he easily confesses: “I lived in the chaos,” he tells her. Now, “I choose to obey.” Still, they haven’t found the key, so there’s a lot more talking and threatening and twitching (well, for Dolores, at least) before Serac eventually orders his tech to erase every single bit of memory left in Dolores. She screams as the power surges. 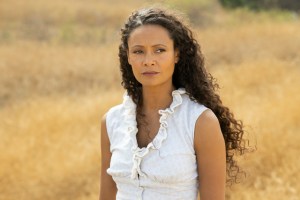 WHO CAN SAY IF I’VE BEEN CHANGED FOR THE BETTER? | Then suddenly, Maeve and Dolores are in a Westworld field, dressed in their western finery. Dolores explains that she was angry at first, torn between wanting to annihilate humanity or tear down its world and build a new one — “then we can bring the others back.” Maeve realizes that Dolores doesn’t have the key to The Sublime, but she gave it to someone she trusts.

Dolores then says that the memories she hung onto until the end were the good ones: kissing Teddy, seeing Maeve and her daughter, William handing her the can as it rolled through Sweetwater. Dolores goes on about choosing to see beauty over ugliness and disarray — it appears sweet, Blue Dress Dolores wasn’t ever totally gone after all — and mentions that Maeve will have to choose a side. Then Dolores blinks out of existence in the memory.

When she comes out of it, Maeve starts coming after Serac, who freezes her and orders her and Caleb killed. But she manages to make his freezer-controller-thing overheat in his hand anyway. He drops it, she unfreezes, and the lights go out. When they come back on, everyone except Maeve and Caleb are dead (though she’s got several bullet wounds in her chest).

“Why are you helping me?” Caleb asks warily. “Flaw in my program,” she says, noting her affection for hopeless causes. Plus, she’s figured out why Dorothy chose Caleb: “She didn’t pick you for your capacity for violence, but for your capacity to choose.” And that’s when we see that Caleb talked the men in his unit out of raping the hosts in Park 5 — one of which was Dolores — back in the day. 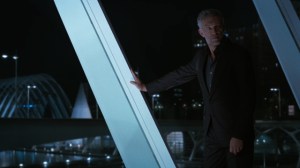 CONTROL-ALT-DELETE | Hold on a sec! Serac’s not dead. But he’s nearly there, and when he orders Rehoboam to call the police, it won’t answer. “Your system answers to him now,” she says, indicating Caleb. Solomon’s memory was the last one stripped from Dolores’ mind, apparently.

Then, while Serac loses his mind, Caleb orders Rehoboam to “execute the final command: Erase yourself.” And just like that, the big red orb powers down. “She gave me a choice. I believe the rest of the world deserves one, too,” Caleb intones.

Outside Incite, Maeve tells Caleb she’s looking for her daughter and they’ll be reunited, “but not today.” And as Los Angeles burns before their eyes, she informs him that there’s a new world about to start. “And in this world, you can be whoever the f—k you want.”

NOT THE END! | BUT WAIT. In a post-credits scene, William — dressed in black — marches into Delos and tells the receptionists he wants to see the hosts. When security attemtps to stop him, he shoots a man in the head. He goes to the research level and finds labs empty… except for Charlotte, the one that got burned in the car wreck. She tells him he’s right on schedule. He wants to save the world, and she tells him he’s right: “You are going to save the world… for us.” Then a Man in Black host marches toward him, fights him and informs him that all of his darker impulses have been distilled into him. He slits [the real] William’s throat, and says, “Welcome to the end, William.”

STILL NOT THE END! | BUT WAIT AGAIN. In a second post-credits scene, a dust-covered Bernard, still slumped over in the motel, suddenly sits up, lights bright. (OK, now it’s the end.)

Now it’s your turn. What did you think of the episode? Grade the finale and season via the polls below, then hit the comments with your thoughts!