At the end of this week’s Outlander, Claire is attacked and physically removed from Fraser’s Ridge by a group of armed men. By the time Jamie becomes aware of what’s happened, his wife’s whereabouts are unknown.

If you’re an Oldlander who’s read Diana Galbaldon’s books, and if the show’s finale next week closely follows the events laid out in those pages, you know what’s coming — and that it’s here early. And if you aren’t, allow me to help you brace for impact: Things are about to get a lot bleaker.

The incident that caps “Journeycakes” — an episode written by Gabaldon herself — is ahead of schedule: Like Stephen Bonnet’s demise, Claire’s abduction takes place in A Breath of Snow and Ashes, or Book 6, while most of Season 5 has been based on The Fiery Cross (Book 5). I fear that next week’s episode will be tough to get through. For now, though, let’s focus on what’s in front of us: Join me for a recap of this week’s hour, aye?

ASHES TO ASHES | A title card informs us that it’s Autumn 1772, and we watch Brianna, Roger, Jamie and Claire returning from a shopping trip. Jamie teases Claire about the giant bags of peanuts she bought, but she remains steadfast in her desire to have Jeremiah taste peanut butter and jelly sandwiches at some point in his childhood. The air of levity among them dies down when they come across the smoking ruins of a house; when Roger and Jamie investigate, they find the family, killed by arrows, dead inside.

A short distance from the house, Roger comes across a little girl with burns all over her body, near death and crying. Jamie moves to end her suffering with his knife, but Roger stops him. Then, while whispering to the girl that it’s going to be OK, Roger holds his handkerchief over her face until she stops breathing. Jamie recites a prayer, blessing her soul. Roger weeps. 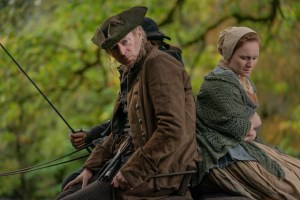 LIKE A SMOKING STONE| Back at the big house days later, Ian is playing keep-away with Jem in the front yard. He’s using Otter Tooth’s opal, which the little boy complains is hot to the touch. Ian says it’s not, but as Jem holds the stone, it cracks in two. Claire, Jamie, Bree and Roger come over to see what’s going on, and it becomes clear that Claire, Bree and Roger — aka all the time-travelers — can feel the opal’s warmth and hear it making a noise; Ian and Jamie cannot. Jamie and Claire exchange a pained look: They know this means Bree and her family won’t stick around the 18th century much longer, because Jem can sense the stone.

But that discussion is tabled when Lionel and Richard Brown ride up with a large number of men and want to talk to Jamie about the [cough] vigilante [cough] committee of safety they’ve just created. “Since the Crown is no longer able to assure the safety of its colonists, we must take matters into our own hands,” Richard says, citing recent attacks like the burned cabin. While Jamie diplomatically tells the Browns he’ll consider their request that he and his men join their cause, Claire brings Lionel inside to look at a wound on his leg.

She’s not happy to see him, and he knows it. He also knows she thinks he shot Isaiah Morton in the back during the Battle of Alamance — something he doesn’t deny — but he points out that he’s merely a father trying to get justice for his dishonored daughter. That makes Claire think for a moment: After all, isn’t that what the previous episode was all about?

IAN KNOWS! | Later, Ian finds Claire and Jamie and wants to talk about the opal. After listing all the things that are weird about them and their history, he gives them Otter Tooth’s journal, which is in Latin. Jamie translates aloud that Otter Tooth didn’t exactly know when he was, but he knew he was too late. “My God, he wrote with a ballpoint pen,” Claire marvels. Finally, Ian has had it up to his cheek tattoos with their obfuscation: “Who or what are ye?” he demands. Off Jamie’s subtle nod, Claire takes a deep breath and dives in.

“Ian, I come from another time. I come from the future, 200 years from now,” she says. As she continues, Ian’s face moves from confusion to wonder to astonishment. “I knew you were a faerie, Auntie,” he says lovingly, but she corrects him that she’s not a supernatural creature. Ian then quickly puts together that Roger and Bree are time-travelers, too.

That night, before bed, Roger and Brianna make a decision: They’re going to return to their time within the month. 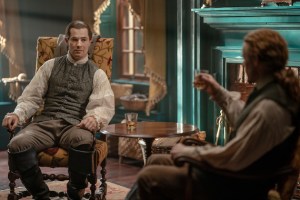 AROUND THE RIDGE | That month flies. Lord John Grey visits to tell Jamie he’s heading back to England — Helwater specifically — because Lord Dunsany has died. He’s also bringing Ulysses with him, because after killing Forbes, Jocasta’s right-hand man can’t stay in the area. (Fun fact, which we learn this episode: Jocasta freed Ulysses right after Hector Cameron’s death, so he’s not, in fact, a slave.)

I cannot possibly relate ALL of the longing looks and veiled adoration the Notorious LJG tosses Big Red’s way (example: After Jamie says that John will miss working the land with his own hands, Grey says, “No doubt there are a great many things I shall miss about being here” in the absolute swooniest swoon voice possible). They talk about the approaching “storm” of conflict, then John gives Jamie a miniature portrait of Willie as he looks now. “Such a handsome lad,” Jamie muses. “The older he gets, the more he looks like his father,” John sighs. (SEE WHAT I MEAN?!)

Speaking of wanting Jamie’s action: One night before bed, Claire dabs scented oil all over her body. But when she glances over, Jamie’s fallen asleep while reading. So she goes to bed without bothering him, but wakes in the middle of the night, sweating profusely. She goes to the window and hangs out of it, trying to get some cool air on her skin.

Jamie stirs and goes to her, and there’s an elaborate bit where they sniff each other like randy bloodhounds, which is why Big Red realizes what he missed out on earlier. “Your special perfume. You wanted me, and I fell asleep without touching you. I’m sorry, Sassenach,” he says. She notes he was tired, but he counters, “You could’ve raised me from the dead for this.” AND YOU DID A FEW WEEKS AGO, I write in my notes. So he sits her on the sill and starts nosing up under her nightgown, nipping her thigh and eventually tickling her tartan in a way that makes her hang halfway out the window in ecstasy. (Side note: As weird as everything I’ve just written sounds — and I’m well aware it sounds weird — this scene is rather hot.)

The next morning, she takes some of his sperm that she “woke up in custody of” and slaps it on a slide, puts it under the microscope and makes Jamie look at it. Because Claire’s gotta Claire.

SO LONG, FAREWELL | The day of Bree and Roger’s departure looms. They tell everyone they’re going to Boston. Marsali (who’s pregnant again) is sad she’s losing someone she considers a sister. Lizzie assumes she’ll travel with them, and is crushed when Bree gently informs her that she’s going to stay behind and look after Claire and Jamie on Bree’s behalf. And Jamie shows Bree the portrait of Willie and tells her the whole story about how she’s got a half-brother she never knew about. “I wanted ye to ken there was more of your blood in the world than me and your mother,” he says, and it’s sweet.

Right before Bree and Roger’s departure day, Lionel Brown brings his young wife, Rose, to see Claire. Her wrist is broken; when Lionel isn’t in the room, Rose confirms that he broke it when she didn’t want to have sex with him. And why didn’t she want to? Because she doesn’t want to get pregnant, and she’s following Dr. Rawlings’ advice (from the newspaper!) about contraception.

Just then, Lionel returns and sees the name Dr. Rawlings on Claire’s medical case — though Claire doesn’t know he sees it. He yanks Rose outta there. Before he leaves, Jamie tells him to tell Richard that he’s not going to join their committee of safety.

MISSION ACCOMPLISHED? | The night before the MacKenzies plan to leave, Claire serves PB&J before dinner. Jamie eats his with a fork and talks about how gluey it is. I do love you, Jamie, but watch yerself.

Then it’s the big day. Ian accompanies Roger, Brianna and Jem to the stones, where they put Jem between them and tie a rope around them, like a little time-traveling sandwich. Then they each hold one of the precious gems and place their hands on the standing stone… and poof! They’re gone. Ian canna believe what he’s seen.

The trio wake up on the ground in a forest, feeling like they’ve been run over by a truck. Then Roger sees something out of frame and mutters, “What the devil?” And… that’s all we get on that story this week, kids!

OH NO | At the house some days later, an explosion at the still sends all of the men running to see what’s happened. So Claire and Marsali are generally alone when Lionel Brown and his men barge in and start tearing the surgery apart. Claire’s patient, a man with a dislocated shoulder, tries to fight them off but gets stabbed in the process. Marsali has the forethought to tell little Germain to hide under a bed and stay there, but then she’s knocked out cold as she tries to take down one of the men with a surgical tool. The men throw a bag over Claire’s head, pick her up and leave.

When Jamie & Co. return to the big house at dusk, a freaked-out Germain informs them that his mom won’t wake up, and “The bad man took Grandmama.” Jamie and Fergus run inside in panic; Marsali is still out, but she’s breathing. Claire is gone.

Jamie starts calling for his wife, grabbing a torch and running up to the bluff where the cross pyre stands. (Wait, I thought they burned it?) As he lights the thing ablaze, we cut to credits.