When Catherine Bell and David James Elliott were reunited in a pair of NCIS: Los Angeles episodes, for JAG fans it was almost be a case of “Be careful what you wish for.” Might Mac and Harm get a second chance to do right by their romance?

Last May’s NCIS: LA Season 10 finale found Elliott’s Harmon “Harm” Rabb now serving as the XO of the USS Allegiance, while Bell’s Lt. Colonel Sarah “Mac” Mackenzie helped out Hetty in her capacity as the Marine liaison to the Secretary of State. JAG fans, alas, learned that Mac hadn’t seen Harm in nine years. Because although he passed up a JAG position in London to be with Mac in San Diego, soon enough he “needed to get back in the fight” aboard an ever-moving carrier.

At the close of NCIS: LA‘s Season 11 premiere last fall — following a successful mission — Mac pulled Harm aside for a drink… but also to call him on the carpet.

“It’s been nine years, Harm…. Why?,” she asked. Harm started to rotely recap the demands of their careers, but Mac cut him off, saying, “That’s not why.” Instead, she stated, “We’re scared. It’s the only reason that makes sense. We never gave it a shot, a real try… because we were scared to.” When Harm started to stammer, Mac made clear, “I’m not standing here in front of you asking you to be with me. I just want us to acknowledge why we’re here tonight as colleagues, and not as husband and wife.”

After Mac shared that Hetty had suggested he put in for a leadership role at NCIS — either in San Diego or with the Contingency Response Team — he himself had to wonder, “Mac, what are we doing…?” To which his longtime love said, “I don’t know but… we’re way past letting fate decide.” And how.

In Part 2 of TVLine’s recent Q&A with Bell (previously, she previewed NCIS: LA‘s latest finale as well as Good Witch Season 6, premiering May 3), she revisits the aforementioned wrinkles in the Mac/Harm relationship and whether they will be properly smoothed out — either on NCIS: LA or by way of a full-on JAG revival. 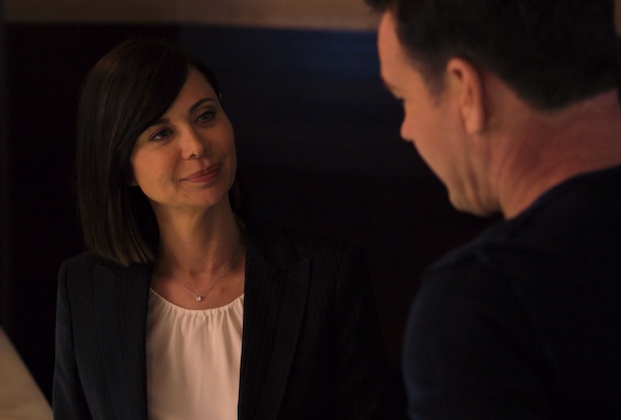 TVLINE | What did you think about, a year ago, when NCIS: LA reintroduced Mac and Harm and showed us where they each are now at in their relationship?
Yeah, that was a tricky call. I know that some [JAG] fans were hoping that we were together and that they would finally see us together. But I haven’t given up hope on that, I will say. It’s funny, in TV people think they want to see you together, but honestly, if we had been married for 15 years, once you saw us on-screen it’s possible the magic could have been gone. [Laughs] Not that that has to happen in a marriage, but 15  years is what it is.

In a way, I thought it was more fun to play because Mac hadn’t seen Harm in 10 years or whatever, because the chemistry, the excitement, the heart palpitations of the first time I see him on-screen, and then the first time in person, was a blast to film with David [James Elliott]. I mean, we had a great time. And I know a lot of fans enjoyed seeing that, but still, they’re like, “Come on! Get together already!” I haven’t given up hope.

TVLINE | Were you, as Mac’s portrayer, surprised or disappointed to see they hadn’t made it work? Or was a part of you like, “That is so them”?
You know, at first I wasn’t sure how I felt about it, but as we got into the episodes, I thought, “You know what? It makes sense.” These two were never easy to get along with. There was always conflict, there was always bullheadedness…. Two strong, independent, hard-working people, the best in their fields…. And neither of them really wanted to give up their careers, so I’m not surprised that their careers took them in different directions. They couldn’t quite give that up for each other. 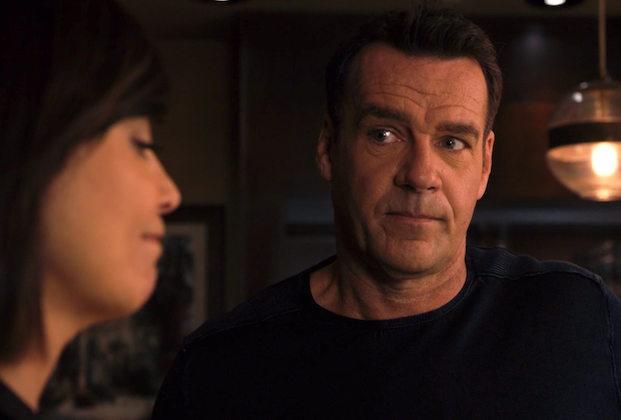 TVLINE | Their last scene together at the bar was so good, almost a verbal dance. Mac had things she wanted to say, but chose a delicate-ish approach when she maybe could have leaned in a little harder.
Right? She should have grabbed and kissed him! [Laughs]

TVLINE | JAG fans of course are super-passionate, and ever since you two showed up a year ago, they’ve been wanting more, more, more. Is the chance for a proper revival any kind of a realistic hope? Have there been any talks?
There have always been “talks.” I can’t say there is anything specific in the works, but there have just always been talks about it. Harm was not in [the NCIS: LA Season 11 finale] but certainly I think that there’s always that possibility, whether they bring us back on this show on a more regular basis or…. There’s been talk of a JAG reboot, but for now, I’m on Good Witch, and I have been for a while now. And that just keeps going, which is amazing.

Want scoop on any TV show? Email InsideLine@tvline.com and your question may be answered via Matt’s Inside Line.