So much for never, ever, ever getting back together.

In the penultimate episode of Brockmire, Jim and Jules got their happy ending — but it came with a pretty big asterisk: The MLB commissioner wedded the ex-owner of the Morristown Frackers after he discovered that he’s in the early stages of Parkinson’s Disease.

“When I read the script is when I found out [that Jim had Parkinson’s],” exec producer and series star Hank Azaria tells TVLine. “I know that part of the Brockmire thing is, for lack of a better term, ‘the Lord giveth and the Lord taketh away.’ I mean, there is no such thing as non-bittersweet in this world.” As such, “if Jim is going to have his happy ending with Jules, there is going to be a yang to that yin, [and that] seemed appropriate to me.”

The series finale (airing Wednesday at 10/9c) will follow up on Jim’s condition in a big way, as seen in the exclusive video above. Accompanied by Jules and Beth, Jim attends a doctor’s appointment where he is pitched one of two options: an experimental medication that may help put off symptoms for the next few years… or elective euthanasia, which is par for the course in the bleak future established by the IFC comedy’s fourth season. (“Dark times,” Jim acknowledges. “Dark, dark, dark times.”)

Somehow even more heartbreaking, though, is learning that the former play-by-play announcer could find his voice forever altered by the disease. “That’s pretty intense,” Azaria acknowledges. “That’s [series creator] Joel Church-Cooper’s writing. He doesn’t make a big deal out of it [in the scene], but [it just] kind of hits you. The emotional nature of it snuck up on me.” 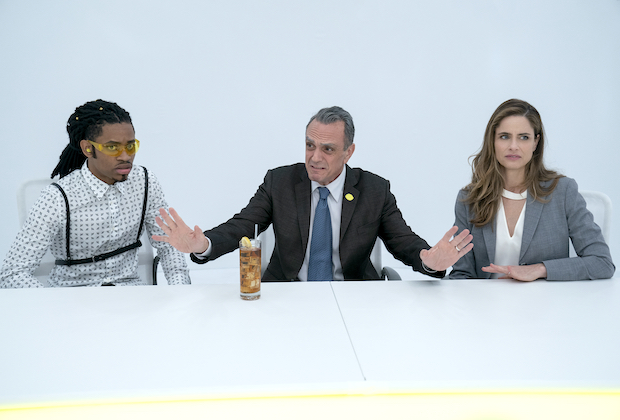 Elsewhere in the series finale, “Limón takes steps in its pursuit to rule the world through artificial intelligence by creating some new hardware and attempting to take over baseball.” That’s when “Jim and Jules must decide if they want to embolden this emerging society ruled by machines and relinquish baseball to Limón,” or embrace the status quo, “which is currently failing and destined to crumble.” Along the way, the newlyweds cross paths with their old friend Charles (guest star Tyrel Jackson Williams), bringing them all together for the first time in 17 years.

“I wish we could’ve included Tyrel’s character Charles even more [during Season 4],” Azaria says. “But it was fun to get the band back together, as they say.”

Press PLAY on the video above for a sneak peek at the finale, then check back on Wednesday night for Part 2 of our conversation with Azaria.