If there’s one thing Better Things‘ Sam Fox desperately needs, it’s closure. While the Season 4 finale explores the kindness of strangers and the challenges of being a woman, it’s Sam’s relationship with her ex-husband Xander that takes center stage. Were they able to bury the hatchet? Here’s what went down in the FX comedy’s final Season 4 installment.

After attending a Dodgers game, Sam, Duke and Murray rush to escape the swarming stadium. When hope seems to have been lost, a security guard named Fortunato comes to their rescue. After mistaking Sam for Constance Zimmer, he offers them a ride. Fortunato inquires about the kids’ dad, but Sam says he isn’t in the picture much. “Next time, marry a Mexican. We tend to stick around,” he whispers to a tickled Sam.

The trio get dropped off at a food truck for some eats, and Sam connects with the owner over their passion for food. Meanwhile, Duke meets an older woman on a bench who claims to see the future. Duke asks her if she ever gets married and has kids; she wants neither. The woman relates: “At the end of a day, I prefer being alone. Being alone and being able to feel good with yourself, that’s the ticket.” The stranger is full of wisdom and one-liners, like: “One compliment from a woman is worth 1,000 compliments from a man.” When their ride arrives, Duke turns to say goodbye, only the woman is gone. Is Duke seeing ghosts outside of their home, too?

Their new driver has two rules: They have to smile and they have to sing. They climb aboard and a sea of lights illuminate the interior à la Cash Cab. He hands out microphones, and the three bust out a rendition of Cheap Trick’s “Surrender,” as they drive. Sam smiles and soaks in the moment. (Note to drivers everywhere: This is a surefire way to get better tips!)

We segue to a segment Sam is producing for an actor-friend’s show. In it, she interviews women about their experiences with womanhood and menopause. Sam eventually takes the hot seat to reflect on how women are built up only to be let down. “They cut us, or sell us, or marry us off. You’re primed and you’re prepped and abused and adored and harassed and worshiped and then… it all stops. We even age out of the bad things, like being fetishized, or diminished, or talked down to. It’s even worse: you’re invisible.” She continues: “Women are afraid to talk to each other. Women should be brothers to each other.”

Later, Xander arrives for their scheduled dinner, but the girls are off at the beach; Sam invites him in anyway. They dilute the awkwardness with some much needed alcohol, and try their best to make peace. Before he leaves, he asks her for the money she owes him, and we see a flashback of them sorting through their divorce online. In the present, Sam tells him: “I’m forgiving you. Not for you, for me. For my life and for my future mental and physical health. And for my daughters.”

“Our daughters,” he corrects her.

“Welcome to the ‘this house is clean slate’ club,” she says.

When he goes to the bank, he realizes the check is from “Xander Hall is a loser and abandoned his kids, LLC.” She may have finally gotten over her past, but in pure Sam fashion, she still squeezes in one last jab.

After hearing the girls were at the beach, Phyl wisely says, “The answers are in the water. It’s where we come from and where we always need to go back to.” Sam and Rich follow Phyl to the pool for a swim, while we cut back and forth to the girls playing. The final shot is of Max, Frankie and Duke sitting on the sand, quiet and pensive. As the sun sets (and R.E.M.’s “Nightswimming” croons), they turn around and stare into the camera.

TVLine talked to Pamela Adlon ahead of Thursday’s finale. Below are some bonus quotes from the interview (which you can read here in full):

On Sam’s menopause piece she produced: 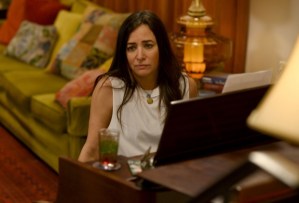 “I’m excited about it because it was something that was sticking with me. I went to the doctor’s office and there was literally a pamphlet sitting in the waiting room that said ‘the menopause years’ and I looked at it like, ‘What the f–k is that, that is so nasty!’ and of course I took one. I pinned it up on the board in the writers’ room for the whole season, and I never really thought about it. When I was writing the finale, I wanted the women to be talking about it. I wanted them to look like they were in the witness protection program because women are so terrified to discuss it. It’s like this dirty little secret, but it’s not! We’ve been going through it through history and nobody talks about it. So if we normalize it for women and men —  men just get older. Women, like, decompose from the inside out, it’s crazy!”

On choosing “Nightswimming” as the final song:
“I knew that I was ending with ‘Nightswimming.’ I walked into the writers room and played it for them and described the end of the show. It was the payoff for Phyl swimming in the nude at the neighbor’s house earlier in the season. I was so mesmerized by it and the writers died when I played it for them. I get these ideas in my head and I get married to them, even when I don’t have the rights to the song yet. But R.E.M. wrote us back and said please use the song with gratitude, they were so grateful. It just all fell into place, and of course, getting the song was the biggest coup.”

Were you glad to see Sam let the past go? Grade the finale and overall season below, then tell us your thoughts in the Comments!