Wearing almost every hat possible, Adlon pines over the series’ finer points, both technical and narrative, preserving a sense of realism that plays out like small batches of vignettes. While her stories each portray a sliver of life’s joys and turmoil, the FX series effectively highlights life’s unpredictability and mystery over the pressured need for neatly packaged answers.

The Season 4 finale hits Thursday at 10/9c, continuing the show’s exploration of familial bonds and poignant moments. And while the coronavirus quarantine hit before post-production was finished, the resourceful Adlon worked tirelessly on sound and effects from a 4K iPad, sometimes while chopping salad at home.

“My network probably wanted me to just deliver what I had, but I take so much care with everything that I was able to finish it the way I needed to, thank God,” she shared with us.

Here, the multi-hyphenate tells TVLine about the season’s overarching themes while teasing what’s in store for Better Things‘ last chapter of the year.

TVLINE | There’s so much attention to detail on your show that there must be a significance behind the rain this season, right?
Rain was the theme. I called [Episode 1] “Steady Rain” because I wanted the Warren Zevon song and I wanted it to rain throughout the season. When the rain came after the terrible wildfires that we had last year, I felt like I had conjured it. I was in so much agony and terror because of those fires. We had to evacuate. It was scary! Of course, it started raining like a motherf–ker while my season has been airing, so everybody thinks I’m psychic and a real rainmaker. I’d take an earthquake over a fire any day.

TVLINE | One of the qualities I love most about Sam is her ability to instantly befriend everyone around her. Are you like that in real life?
In that respect, Sam is just like me. I had a friend tell me I could walk into an elevator and start talking to people, and they’ll look at me like, “Who the f–k… why are you talking to me?” and by the time the doors open, we’ve exchanged numbers and we’re best friends.

TVLINE | People communicate so differently today, hiding behind our phones. It’s great to actually connect with people.
It’s really true. What’s happening right now [during the quarantine], people say, “I miss my friends, my this, my that…” but people are connecting on a higher level than they ever have, and it’s almost like it doesn’t matter if you’re not physically there. We are seeing each other’s faces, where as before we were just texting each other. But now, people make appointments and they look at each other, it’s extraordinary!

TVLINE | You shoot on a set built of the original house. How does that change the way you direct scenes?
The people who built the set are geniuses, master carpenters and craftsmen, and when my cast came to the set for the first time, they were stunned. It was like The Twilight Zone. In terms of the differences for me as a director, I wasn’t dealing with the elements that I had to deal with when we were shooting at the practical house. Like, we can’t use the bathrooms inside… well, we can’t use the bathrooms inside the set either [Laughs], but we were outside in 90-plus degrees and a bear was by crafts services, which is why I wrote a bear into the show.

TVLINE | You definitely still capture that same raw realness.
It made our lives so much easier [working on the set]. I was afraid we were going to lose the patina, the look and the feeling, and we did not lose one thing. It just made everything better. 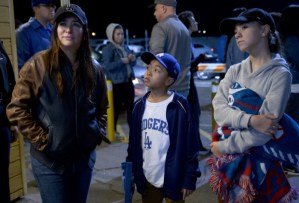 TVLINE | Can you tell me a bit about your love for food and why you feature it so prominently?
Food just started being a character in the show. Sometimes I try to put things in my show that can be good for people. It’s kind of like when you’re a parent and you’re making your kid a smoothie and you throw some spinach in there. I just like to say, “Look, it’s not so f–king hard to make a meal. Let me show you how to do one in an everyday chaotic house, even as a single parent.” Also, it’s fun to look at food shot in a loving way. That’s a very animalistic thing that we all have. Cooking is occupational therapy for me and my family, and we love to honor what we’re eating.

TVLINE | In the April 23 episode, Sunny told Sam she has to get over her negative feelings toward her ex-husband. Can you tease what happens between Sam and Xander in the finale?
I had different themes I wanted to address this season and one was forgiveness. It’s a big deal. There are a lot of people who say if you forgive, you’re doing that for yourself. If you give your forgiveness, you can’t expect anything in return. You have to just give it. That’s the whole thing about atonement. It’s probably the hardest thing in the world to do as a human being, and the most divine thing you can do.

TVLINE | I was concerned for Phyl this season. With the mental and physical ailments she suffered, did you ever consider deteriorating her health further?
Or murdering her?

TVLINE | Or that!
I really take it as it goes with Phyl. When you’re doing a show, fans want you to decide what’s going to happen with a character. So after Season 2 when Phyl had these episodes, or like the ending of Season 1 with Max saying, “Frankie’s a boy,” people were saying, “Well, she’s going to be trans now” or, “Phyl’s going to be mentally incapacitated.” So, she had a cardiac episode, she gets a little more “off” in her head. I try to take care without making things be too symbolic or going, “Well, we have to do this, because we’ve already done this.” That’s not the way life works.

TVLINE | Have you started writing Season 5 yet?
I really don’t give a f–k about Season 5 until we finish corona because I don’t know what’s going to happen. I can’t imagine writing a whole season for Better Things and then never producing it. That would be heartbreaking. When I think forward to Season 5, if we ever get out of this, I want everybody to be better. We’ve got to be better as a planet, we have to be better to each other and we have to be cleaner. I’ve always been into washing hands!