Uh-oh, avert your eyes, “Bughead” and “Varchie” loyalists: Archie and Betty looked to take their forbidden romance to the next level this week on Riverdale.

Betty, F.P. and Alice get a look at that creepy video of a guy in a Jughead mask getting his head smashed in. Whoever made that video, they clearly know what happened to Jughead in the woods, and Charles offers to lend him a hand combing through footage — but Betty isn’t ready to get involved in another mystery. She’d rather leaf through her old diaries about her childhood crush on Archie, while Archie is still thinking about that kiss they had. With Jughead and Veronica both busy, Betty and Archie lie in bed together (!) down in the bunker; they both love who they’re with, they insist, but still, “this is nice, right?” Archie asks, as they hold hands (!!). 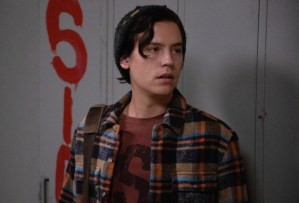 Jughead spots a familiar face on surveillance video and confronts Ethel Muggs — oh, hi Ethel, it’s been a while! — thinking she made the Jughead mask video. She denies any involvement, but a trip to a local video store reveals that Ethel rented Friday the 13th a bunch of times, so she clearly has murder on her mind. (She’s also president of the school’s AV club, so she has access to lots of video equipment.) Meanwhile, Archie visits Fred’s grave looking for advice, and Betty reads in her diaries about when Archie “proposed” to her as a kid — and she told him to propose again when they’re 18. (Hmmm.) At school, Archie confesses to her, “I can’t stop thinking about you,” and she can’t stop thinking about him, either, so they make a date to meet at the bunker the next night.

Charles finds an incriminating videotape in a sweep of the Muggs household: the sex tape of Betty and Jughead at Stonewall! She says she got it from a black-market swap in the back of the video store called the “Scarlet Suite,” and when Jughead and the feds search it, they also find… a snuff film of Cliff Blossom killing his son Jason. The video store shuts the private room down, which disappoints one regular customer: Principal Honey!

Meanwhile, back in “Barchie” land, Betty admits her conflicted feelings to Cheryl, but Cheryl reminds her that she and Jughead are the real thing — even “endgame, I dare say.” In the bunker, Archie starts to play Betty a song he wrote for her (aw!), but she cuts him off mid-song, saying they can’t go through with this. She chalks all this up to the anxiety they’re feeling about their uncertain future, but she firmly puts an end to it: “Whatever this is, or was… it’s just over.” That inspires Archie to tell his mom he’s ready to apply to the Naval Academy, while Betty “exorcises [her] demons” by tossing her old diaries into a roaring fire. (Alice convinces her to keep one of them, though.) Betty reunites with Jughead and agrees to help solve the videotape mystery, just in time for Cheryl to get an unsettling delivery: a video of a guy in a Jason Blossom mask taking a bullet to the head. 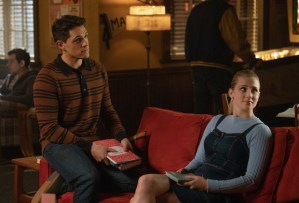 Elsewhere in “Lynchian”: Kevin and Fangs brought Reggie into their tickling video side hustle, and Reggie convinced them to strike out on their own, which led to them getting ratted out to Principal Honey; Veronica cooked up a budget-friendly version of her rum for college students called “Maple Claw” (ha!) and faced threats from angry moonshiners, and Hiram got beat to a bloody pulp trying to protect her, so he went back and murdered the head moonshiner; Cheryl asked out of the rum business (can’t blame her); Kevin and Fangs made plans to date once they’re in college; and wait: Betty is in charge of the school yearbook, on top of everything else?!