Riverdale came back strong this week with another musical episode — but we’re still thinking about that surprise lip-lock, to be honest.

The Stonewall saga is over (finally), but those creepy VHS tapes are still showing up on everyone’s doorsteps. (Guess it wasn’t Bret after all.) Jughead and Archie sing the highly appropriate “Wicked Little Town” from Hedwig and the Angry Inch, soon joined by the full cast, and while Betty is pushing Jughead to catch up on his classwork so he can graduate on time, he sneaks over to Charles to offer help researching the VHS tapes. What would Jughead do without a mystery to solve? Wither away and die, we suppose.

Kevin is organizing the school variety show, but Principal Honey informs him he won’t be allowed to do a number from Hedwig like he planned. (It’s not age-appropriate, you see.) Kevin pushes back, singing “Random Number Generation” as other students join him in wearing T-shirts with numbers on them and trashing their lockers in protest. Plus, Archie signs up to perform as a band… called The Archies! He recruits Jughead, Betty and Veronica to join his band, although they don’t exactly love the name. (“What, was The Me Me Mes taken?” Jughead scoffs.)

Kevin is ready to give up and sing a song from Oklahoma when Fangs encourages him to “go rogue.” So instead, he gets dressed up in full Hedwig regalia and orders everyone into the music room, where he sings “Tear Me Down” and plants a kiss on Archie (!) in the process. That’s the last straw for Principal Honey, who bans Kevin from the variety show. At a sleepover with the girls, Kevin complains that he felt like he was just getting back in touch with the “pre-Farm Kevin,” and they try to cheer him up with a makeover montage set to “Wig in a Box.” Betty has an idea: Why don’t we all just do numbers from Hedwig? After all, that show does have more than a few catchy tunes… 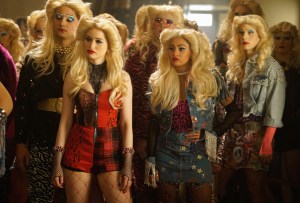 Cheryl tries to convince Principal Honey to change his mind with a saucy performance of “Sugar Daddy” at Pop’s, and the entire school shows up in Hedwig wigs and makeup to support Kevin’s reinstatement. But it’s no use: Honey ends up canceling the variety show altogether. Meanwhile, there’s trouble in paradise for our two core couples. Veronica gets upset at Archie when Hiram falls ill and she finds out that Archie didn’t tell her about her dad struggling at the gym, and Betty gets upset at Jughead when she finds him combing through those VHS tapes instead of studying, with the guys singing “Exquisite Corpse” in reply.

Betty ends up at Archie’s, and since they’re both fighting with their significant others… they reminisce about the good times they had together as kids before singing “The Origin of Love.” And then they kiss! For real this time! They’re both a little guarded when they go back to Jughead and Veronica. Jughead apologizes for blowing off his studies, and Ronnie offers to host a makeshift variety show at the speakeasy so The Archies can perform… but Betty and Archie are still thinking about each other. They gaze out their bedroom windows at each other and sing “Wicked Little Town” while they fantasize about slow-dancing together in her bedroom. (“Barchie” fans, are you still breathing at this point?) 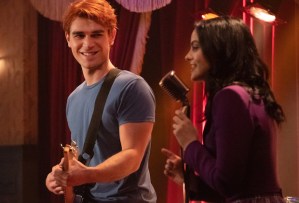 The Archies make their debut at the speakeasy variety show, performing “Midnight Radio” while Archie and Betty sneak glances at each other. They end up playing on the roof of Pop’s — how is Archie’s electric guitar still playing up there, even though he unplugged it? — as Principal Honey glares at them from the crowd. But Jughead is still wondering if the VHS tape voyeur is out there somewhere… and later, he receives the most disturbing video yet: someone in a Jughead mask getting his head crushed with a rock by a Betty-masked attacker. Guess we can forget about that “no more mysteries” pledge, huh?