Riverdale‘s resident crime-solving duo Betty and Jughead cracked the case of his attempted murder this week — and one key character didn’t survive the fallout.

Jughead is stuck alone in the bunker, living off of microwave dinners and watching a live stream of his own funeral, hard at work trying to piece together why the Stonies are framing Betty. But the truth about his fake death is starting to leak out — Jellybean knows the truth, along with F.P. and Mary, and when Hermosa figures it out, Veronica hires her as a private eye — so Betty and a very much alive Jughead march into Mr. DuPont’s study group and lock the doors, announcing that they’re all staying put until the real story comes out. 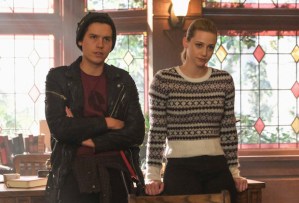 Betty and Jughead painstakingly lay out all the evidence about Moose’s abrupt exit, about the Baxter Brothers franchise being stolen from his grandfather Forsythe, about Mr. Chipping’s so-called “suicide.” Their theory: All of the Baxter Brothers writers were hired around the same time that one of the “Stonewall Four” disappeared… so to win the contract, you need to commit the perfect murder. Jughead accuses the entire study group of conspiring to kill him, with Joan cracking him in the head with a rock and Donna blowing “devil’s breath” into Betty’s face so she’d think she killed him. But Jonathan, who was supposed to check Jughead’s pulse, got food poisoning — and Archie and Veronica arrived in time to help Betty give Jughead CPR and revive him.

He ended up in a coma for 36 hours, but once he recovered, they set their sights on Mr. DuPont: They accuse him of silencing all of the former Baxter Brothers ghostwriters and all the old Quill & Skull members, too — all except one, that is. They bring in Jughead’s grandfather Forsythe, who says another Quill & Skull member warned him that DuPont was targeting them, and then died days later. (That’s why Forsythe abandoned F.P. and his family.) Charles arrives, too, and says they found evidence of DuPont’s kills during a search of his home. Backed into a corner, DuPont insists he built this school and the Baxter Brothers franchise… before hurling himself out a window to his death. 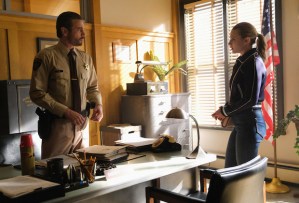 F.P. and Charles interrogate the rest of the study group: Donna tells Charles that DuPont put her up to lying about Mr. Chipping, and Bret threatens to leak Betty and Jughead’s sex tape if he’s not let off with community service… before F.P. and Jughead pummel him into submission with brass knuckles. He gives up the location of the sex tapes, which are destroyed, and the Quill & Skull society is disbanded. Donna is transferring to a new school and taking over the Baxter Brothers franchise, rebranding it as “Tracey True.” But Betty confronts her with the knowledge (dug up by Hermosa) that Donna’s grandmother was one of the original Quill & Skull members, and Donna was plotting to take the franchise back as revenge. She gets Donna to give up the contract and strides out of Stonewall Prep one last time, victorious.

Cheryl isn’t surprised Jughead is alive — “No one ever really dies in Riverdale, do they?” — and she also sensed a real spark between Betty and Archie when they were faking. (Betty brushes her off… but this will definitely come back up again, right?) F.P. and his dad Forsythe mend fences, and the core four ends up back in a booth at Pop’s, renewing their vow to end senior year on a high note. “No more mysteries,” they decide. Now they’re concentrating on helping Archie and Jughead graduate on time — and signing up for Kevin’s school variety show, of course. Case closed!