Not only are Riverdale‘s Archie, Betty and Veronica are mourning the death of their friend Jughead… now they’re facing accusations that they’re the ones who killed him.

This week, Alice is filming her own true-crime documentary about Jughead’s demise, and her camera is rolling when Betty gets a call from Yale: There’s a spot open for her now — Jughead’s spot, that is. Cheryl comforts Betty, since she’s been through this kind of loss herself with her beloved Jason, and volunteers to watch her at all times to make sure she doesn’t tumble into a pit of despair (or a frozen river). While clearing out Jughead’s room at Stonewall, Betty find an old tie pin… and Bret taunts her with the knowledge that Jughead won’t be joining them at Yale. 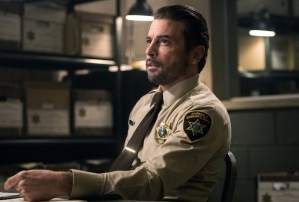 F.P. confirms they found Jughead’s body: The cause of death was “blunt force trauma to the head,” and a bloody rock found nearby has been set out for testing. He searches Donna’s room at Stonewall and finds Jughead’s tie pin, but she tearfully accuses Betty of being the killer, claiming she saw Betty holding a rock in the woods, along with Archie and Veronica. That’s enough for F.P. to march into Riverdale High and arrest Archie, Betty and Veronica for Jughead’s murder. (Betty keeps saying this is all part of her plan… but is it, though?)

The three of them are tossed into a cell before F.P. interrogates them all separately. Veronica has Hiram to back her up, while Archie has Mary and her legal skills to defend him. Alice isn’t much help to Betty, though: She’s convinced her daughter did it, after losing control of her “Dark Betty” rage. But the tests show the rock was covered in fake blood, so Betty and the others are released. Donna is left scrambling — we learn that she and the Stonies planted a rock with Jughead’s blood on it — and she calls Betty late at night, declaring that she knows they’re just faking Jughead’s death. (Hey, that’s my theory!) 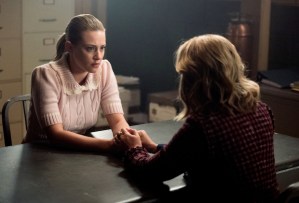 Betty urges F.P. to hold a funeral for Jughead, and Donna shows up, promptly questioning why the casket is closed. F.P. gives a tearful eulogy, and Betty adds her own, reading a passage from Jug’s favorite Sherlock Holmes short story “The Final Problem,” which featured Sherlock’s death. But when Donna dares to interrogate Jellybean, Betty kicks her out, and the guys stop Bret before he’s able to look inside the casket. Now even Kevin is questioning whether Jughead is really still alive… and Hermosa sniffs out the fact that Veronica and her two friends told three very different stories about the night Jughead died. An emotional Betty confesses to Archie that she’s crumbling under the pressure, and Archie puts his hand on hers to reassure her. Hmmm…

At school, Betty says to Archie that “I just want to feel good, even just for a few moments,” and he tells her he’s “always been there for her” — and they freaking kiss! Cheryl is there to snap a few photos and breaks the news to Ronnie, who angrily confronts her boyfriend and her BFF for this betrayal, telling them both to “burn in hell.” (Is this all part of the charade? I feel like I’m taking crazy pills!) Donna’s not giving up, though: She informs Betty that she’s seen her sex tape with Jughead (!) and tracks her every move, watching as Betty brings a take-out order from Pop’s down into Dilton’s bunker. When she follows, she finds Betty in there… with Archie.

Breathe easy, “Varchie” fans: They’re only doing it to fool Donna, and Archie is soon back in bed with Veronica, giggling about their “little gambit.” Plus, Jughead is alive! He’s been hiding underneath a cot in the bunker, and Betty’s already knitted him a replacement beanie. But Veronica and Jughead are both wondering if any of the old “Barchie” sparks are still there… while Betty and Archie exchange some intimate late-night texts. Donna still thinks Jughead is alive after spotting a third milkshake in the bunker, and when Bret tries to get her to move on, Donna slaps him silly — and threatens to kill him next. And Jughead has an epiphany when Hermosa digs up the fact that Donna is really… someone else. (But who? Who, dammit???)

Elsewhere in “To Die For”: F.P. quit as sheriff after Hiram suggested he take a leave of absence; Hermosa gloated about Ronnie’s Barnard admission being put on hold and tried to ship her out of town with a fake passport; Archie lost the faith of his community center kids after he was accused of murder; and Cheryl mourned the only way she knows how: “I’m sorry I called Jughead a ‘hobo’ that one time.”