For those of you still holding out hope that Jughead isn’t really dead, tonight’s Riverdale sure didn’t help ease your fears, did it?

We pick up in that patch of woods behind Stonewall, with Archie, Betty and Veronica burning their clothes — and Jughead’s beanie — in a campfire. (At least Jughead’s still narrating, right?) They tell their parents three different stories, though, and in a booth at Pop’s, the trio tries to get their alibi straight. Betty did already tell Charles the truth: “Without him, we would all be in jail right now.” Ronnie is still wondering why Betty was holding that rock, but Betty insists those “psychotic preppies” are trying to frame her, and she won’t let them get away with it. Poor Kevin gets shooed away by Archie — he was only trying to get some screen time! — but Betty quickly calls him back, eager to pretend that everything’s fine.

After calling F.P. with a pre-scripted message of concern about Jughead, Betty heads back to Stonewall to find out what Bret and Donna know about that fateful night. Donna remembers Betty and Jughead heading into the woods together and accuses her of being blackout drunk… and slyly brings up Evelyn Evernever’s name again. They’re confident Jughead will show up at some point — but they don’t notice Betty installing a bug in Bret’s dorm room. (Meanwhile, Veronica confesses to Archie that she’s still suspicious of Betty’s involvement and tells him about “Dark Betty’s” ill-fated rendezvous with Chuck Clayton.) 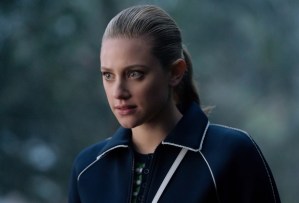 Desperate to clear her name, Betty visits Evelyn in prison, and the Farm girl hints that she may have let her fugue code word slip to Donna. A shaken Betty starts to worry that she might have actually killed Jughead, so she enlists Archie to go to Stonewall and start a fight with Bret to get him talking. Archie slaps Bret around a bit, but Bret still insists Betty was the one who killed Jughead — and they discovered the bug, too. And the bad news keeps coming for Betty: F.P. and Alice sit her down and tell her they found Jughead’s phone in her jacket… and they want an explanation. Betty stammers out something about forgetting it while it was charging, but later realizes a Stonewall student must’ve planted the phone on her earlier.

F.P. gets a report about a bloody rock in the woods (uh-oh), so Betty scrambles to doctor another rock with fake blood and gets Charles to switch it out. But now Veronica’s Barnard admission is in jeopardy because of all this, so she and Archie press Betty for the truth. Betty tearfully admits she doesn’t remember anything and fears that Donna’s code word made her hurt Jughead. Charles talks her through a hypnosis session to recover her memories of that night, and she remembers Donna blowing some powder in her face, knocking her out. Charles thinks it could’ve been “devil’s breath,” which wipes out short-term memory, but theorizes that Donna just set her up to look like she killed Jughead, rather than Betty doing the deed herself. 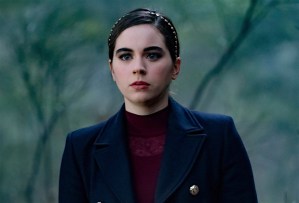 Betty invites Donna out to the woods and confronts her about the “devil’s breath,” but Donna just giggles that she knows Jughead’s body won’t be found — and if it is, all the evidence will point to Betty. It’s “the perfect murder,” she says. So in an effort to flip the script on the Stonewall villains, Betty organizes a search party so F.P. can find the body, and Archie leads F.P. to his pal’s lifeless corpse. We see (once again) F.P. and Betty identifying Jughead’s body at the morgue, and Mary comforts Archie… before he confesses to her what really happened. Betty confronts Donna one more time — and vows to take her and her Stonewall pals down. “I’m the ultimate wild card,” she declares. “You’re going to regret ever meeting me.”

Elsewhere in “How to Get Away With Murder”: Mary’s old pal — and new girlfriend! — offered to recommend Archie to the Naval Academy; and Hiram updated his will and had a heart-to-heart with Veronica about his illness (which I’m still not fully buying, by the way), so she reluctantly agreed to be a co-executor with Hermosa. (She still called her “a suspicious bitch,” though, so they’re not exactly having slumber parties and braiding each other’s hair just yet.)