The Ides of March have arrived on Riverdale — and if you know your Shakespeare, you know that date means very bad things for one character.

Jughead is officially kicked out of Quill & Skull after Betty’s break-in, Mr. DuPont informs him, and that’s not all: His Baxter Brothers contract will be terminated unless he submits an entirely new book by Friday, aka the Ides of March. (Stonewall throws a big party in the woods every year on that fateful day.) With Betty’s help, Jughead scrambles to write a prep school thriller based on his time with Stonewall — one that centers on “the perfect murder.” (Hmmm.) But then DuPont makes things even harder on him by accusing him of plagiarizing his Yale writing submission from fellow student Jonathan, and Jughead can’t find his old laptop he originally wrote it on. Now he’s slated for a disciplinary tribunal… also on the Ides of March, of course.

To find out who’s behind this, Jughead and Betty set up a lie detector test at Stonewall — a loan from Charles, maybe? — and when Jonathan refuses to take it, Jughead does and professes his innocence. They also snoop around some more and find a new Baxter Brothers novel ready to print: It’s Jughead’s original submission, which was rejected, but with his name removed. (DuPont says it’s in his contract that they can take his submission and rewrite and publish it.) When Betty pushes Donna to confess that she lied about Mr. Chipping, Donna laughs her off, and when Jughead threatens to blow the lid off all of Stonewall’s secrets at the tribunal, Bret threatens him right back — by saying he’ll leak a sex tape of him and Betty. (Yep, that jerk was taping them after all.) 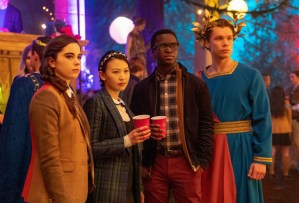 At the tribunal, a seething Jughead volunteers to leave Stonewall rather than risk hurting Betty. But he has a plan to get revenge at the Ides of March party: He brings a switchblade and a rabbit mask, and he and Bret head into the woods to settle their differences once and for all. Meanwhile, Donna tells Betty she paid Evelyn Evernever a visit in prison, and now she knows the code word to send Betty into a fugue state. Archie and Veronica stumble upon Betty and Jughead in the woods: Jughead is on the ground bleeding, with no pulse — and Betty is clutching a huge rock. Alright, enough with the flash-forwards, here we go… 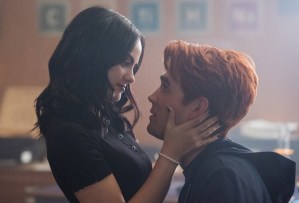 * After learning about her dad Hiram’s debilitating disease, Veronica was determined to make every moment count this week, indulging in a sex and alcohol-fueled hedonistic streak. Archie noticed something was off, though, and she confessed in tears that she was afraid of losing her dad. Archie encouraged her to inspire Hiram to keep fighting — so she launched a new ad campaign for her maple syrup rum that directly attacks Lodge Rum, enraging him enough to retaliate. (Well, it’s not a hug, but it’ll do.)

* After a few weeks off, Hermosa reemerged and slapped on a blonde wig to sniff out the truth about Veronica’s rum line, and it looked for a minute like Cheryl and Toni were about to invite her into their bed (!)… but it was all just a ruse set up by Veronica. She snatched off Hermosa’s wig and accused her of corporate espionage on Hiram’s behalf — and Ronnie stormed off in tears when she found out Hiram told Hermosa about his condition but never told her.

* Archie got some bad news from Principal Honey: Not only is he too late to apply for colleges, he’s not even going to be able to graduate on time with his friends. He told Veronica he’d go to summer school and apply for spring semester, though. He also couldn’t bring himself to sell off Fred’s construction company, and brought in Tom Keller as acting foreman.

* Nope, still not trusting Hiram’s diagnosis — and not trusting him cozying up to Archie while training at his boxing gym, either.

* Jughead’s very thinly veiled account of his time at Stonewall was worth a few laughs: “Jarhead’s” fellow students are plotting to kill his roommate “Bison”? What about his best friend “Smarchie” and his dad “P.F.”?

* Veronica had the best description of the Stonewall party: “It’s like A Midsummer Night’s Dream had a baby with Euphoria.” (Hey, another Shakespeare reference!)