You’d think after last week’s humiliating quiz show defeat, Riverdale‘s Bret would have the decency to slink away quietly. Yep, you’d be wrong.

The preppie jerk accepts Jughead’s challenge to an old-fashioned duel, and Mr. DuPont lays out the ground rules: First, they’ll fence, and then square off in a bare-knuckle brawl, and then play chess if they need a tie-breaker. Donna promises to coach Jughead up in fencing, but Bret manages to knock his sabre away and score the victory. Jughead wins the bare-knuckle fight, though, by landing a punch square on Bret’s jaw and knocking him out cold. That leaves one pivotal chess match to decide the winner — as Jughead discovers that just about everyone at Stonewall is rooting for him to lose. 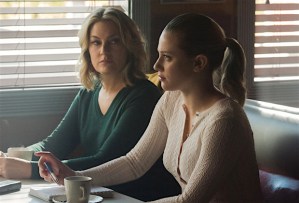 Meanwhile, Betty’s been suspended and stripped of her Blue and Gold editorship after the quiz show cheating scandal, and she and Alice set their sights on finding out what really happened to Mr. Chipping. They visit his widowed wife, who insists he’d never have an affair with Donna and points them towards a box of his belongings that includes a bunch of Army brochures. Moose tells them Mr. Chipping urged him to enlist, and he agreed after Bret threatened to leak a videotape of him having sex with a classmate. Yikes… now Betty realizes Bret might also have a tape of her and Jughead. (Sorry, Alice.)

At the chess match, Jughead and Bret trade moves while Betty and Alice take advantage of the distraction to search Quill & Skull headquarters for the tapes. They find a stash of old videotapes in a secret hiding spot, but Bret insists they’re just tapes of Quill & Skull members confessing their darkest secrets for initiation. As for the chess match, a disgusted Jughead lets Bret win, not even wanting to be a “Stonewall man” anymore. Betty did smuggle out Donna’s confession tape, though, and it has her telling the same story about Mr. Chipping… but about a teacher named Mr. Kotter who doesn’t exist. Uh-oh, is Donna the one we should’ve been worrying about all along? 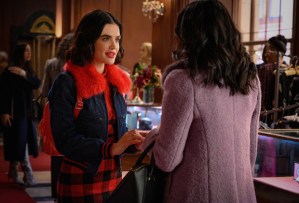 * We got our first glimpse of Katy Keene — premiering Thursday on The CW! — as Veronica went to visit her very close pal Katy in New York City. (You know, the very close pal she never mentioned before this season.) The gals went on a glamorous shopping spree, but afterwards, Katy confessed that her mom is very sick — and then Ronnie went home to discover that her dad Hiram has been diagnosed with a neuromuscular disorder that will rob him of his motor skills. A stunned Veronica decided to enroll in NYC’s Barnard College… and take Lodge as her last name once again, to honor her papa.

* Archie’s Uncle Frank caused more trouble this week, this time by bringing home an old war buddy named Ted Bishop who turned out to be a mercenary tasked with killing Frank. (Frank was a mercenary, too, and suspected his former employer wanted to tie up “loose ends.”) Frank tricked Ted into getting arrested, but Ted escaped and ambushed Archie at school, leading to a deadly struggle that ended with Frank saving Archie’s life. The feds arrested Ted, and Frank left town after promising to turn himself in. Which is kind of a good thing for Archie (and us), don’t ya think?

* Cheryl got an unwelcome blast from the past when Nick St. Clair (another preppie jerk!) turned up at the Maple Club looking to throw a party with his Harvard-bound pals. A shaken Cheryl told Toni all about Nick drugging her and trying to rape her, so Toni got revenge by luring Nick into a private room and drugging him, making him the unwitting star of one of Kevin and Fangs’ tickling videos. She warned him to stay out of Riverdale unless he wants that tape exposed — but wait, we’re drugging and assaulting people to prove how drugging and assaulting people is wrong? Just making sure I’m following along here.

* Am I a terrible person for not fully believing Hiram’s story that he is facing a serious illness? That guy has just lied too many times to too many people to trust him at this point.

* I’m also not really buying Bret’s story that all those videotapes are simple confessions, especially after we saw a camera running during a Jughead-and-Betty tryst earlier this season. And speaking of videotapes: Could he also be behind those creepy videotapes of people’s front doors that we haven’t heard about for a few weeks?