Betty looks to take down Stonewall Prep’s resident jerk Bret in a quiz-bowl showdown this week on Riverdale. (Yes, these kids do occasionally read books when they’re not solving murders or busting up cults.)

Gripped by “quiz show fever,” Betty ruthlessly drills Veronica, Cheryl and Toni to get them ready to take on Stonewall. She and Jughead do take time out, though, for a mid-afternoon romp — which is spoiled when she finds out that Jughead got into Yale and didn’t tell her… and hey, Bret got in, too! At the quiz competition, the girls bulldoze their way to an easy victory on their way to meeting Stonewall in the finals. But Bret is lurking around the set spying on them, so Betty asks Charles to use his FBI resources to dig into Bret’s past and “make him sweat” a little — and Charles also offers to talk to a criminal-law professor he knows at Yale to find out why Bret got in and she didn’t. 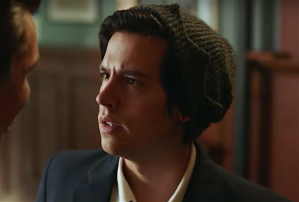 What does he uncover? Turns out Bret’s dad paid someone to take the PSATs for him and bought his way into Stonewall — and Yale, too, probably. Betty confronts him with the truth… and Bret hits her back with the fact that Jughead is using her dad’s Black Hood story as the inspiration for his Baxter Brothers book, which sets off a huge fight between the two lovebirds. (No, not “Bughead”!) It gets worse for Betty when Charles breaks the bad news: Yale rejected her because they didn’t want the negative publicity that comes with “the daughter of the Black Hood.” In a rage, she smashes up Hal’s gravestone with a sledgehammer until Alice arrives to pull her away. But Jughead comforts her and pledges to help her get back at Bret… and get into Yale.

He brings the Yale recruiter to the quiz show’s final round: If she beats Bret and Stonewall, she’ll get in. And Alice has a present for her in the dressing room… a copy of the quiz show questions and answers. The game starts out with Betty and Bret trading correct responses — nice Mean Girls shout-out with “the limit does not exist”! — leading to a head-to-head showdown for the win. Bret flubs the final question, and Betty gets it right and secures the victory. She and Jughead celebrate and plan to eat lots of pizza together in New Haven… and she didn’t even use Alice’s stolen answers! But Principal Honey found them in her dressing room: Betty gets suspended, and Riverdale High’s victory is overturned. Jughead blames Bret for ratting her out and challenges him to a formal duel, per Quill & Skull rules (!).

Cut to four weeks later: A tear-streaked Betty sobs to Archie, “He won’t ever come back… and I don’t know how I’m supposed to keep going.” And then they take each other’s hand… (You still out there, “Barchie” loyalists?)

Elsewhere in “Quiz Show”: Archie got Uncle Frank a job as foreman at Fred’s old construction company, leading to an ugly rift with Tom Keller, who only knows Frank as a screw-up; Veronica and Cheryl turned the speakeasy into a dance club to finance their maple syrup rum line, but when Hiram shut it down, they relocated to the vacant Maple Club, even bringing in Penelope to help; and Kevin took a new gig… filming non-sexual tickling videos for cash? (Yeesh. When we asked for Kevin to get a storyline, I guess we should’ve been more specific.)