Riverdale is back from winter break — and hey, did you remember Archie is still on the football team? Yeah, we didn’t, either.

Wednesday’s episode actually resembles a normal high school drama for once, with Archie and his Bulldog teammates gearing up to take on Jughead’s Stonewall Prep in the state championship. Wait, Stonewall — that richy-rich school full of bookish nerds — is playing for the state title? Well, that’s because they cheat, as Betty soon finds out. She does some sleuthing for a newspaper article and discovers that Stonewall players intentionally injure the other team and pay off the referees to look the other way. She takes the accusations to Stonewall player Bret, who calmly tells her that football is all about “debilitating and slaughtering your enemies.” Alright, go team!

That win-at-all-costs attitude rears its ugly head again when Riverdale’s star player Munroe takes a golf club to the knee during a street fight with four masked assailants. (Yep, looks like Stonewall kids to us.) Archie and his pals head over to Stonewall looking for answers, and he ends up punching Bret dead in the face — long overdue! — setting off a full-on brawl that lands Archie in jail. (He gets bailed out by his Uncle Frank, and they bond over their shared love of boxing.) Now the Riverdale gang wants revenge… and Betty comes up with a plan to get it. 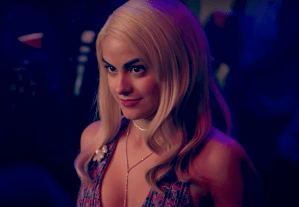 Veronica puts on a blonde wig and a wire to infiltrate a Stonewall party as “Monica” and seduce Bret, using her new rum to win him over. She almost gets him to confess to taking out Munroe, until Jughead blows her cover. (Plus, Betty finds out Jughead has an interview with Yale and is in Quill & Skull and never told her about it.) Munroe is still too injured to play… but Uncle Frank offers him some painkillers to get through the game, and he wants a scholarship, so he takes them, despite Archie’s protests.

During the game, Archie tries to protect Munroe from Stonewall’s dirty tricks, while Cheryl and the River Vixens do a feisty cover of the Runaways’ “Cherry Bomb.” Munroe scores a late touchdown, and they go for a two-point conversion to win — but Munroe gets stuffed at the goal line, and Stonewall wins. Archie lashes out at Uncle Frank for the painkillers, but Munroe got an offer from Notre Dame out of it, at least. After the game, Bret gloats to Betty and Jughead, and Betty vows to take him down by forming a quiz team to counter Stonewall’s. Plus, Jughead learns he got into Yale, along with Bret — but in a flash-forward to “one month later,” Bret scolds Betty for crying in Jughead’s empty dorm room and tells her: “I guess it’ll just be you and me in New Haven.” But wait, didn’t Betty get rejected by Yale? Hmmm…

Elsewhere in “Varsity Blues”: Cheryl butted heads with new cheerleading coach Miss Appleyard, eventually locking her in the locker room in a gameday “coup”; Mary told Archie about Frank’s dark side — Fred once has to take the fall for Frank’s DUI — but Frank blamed his former bad behavior on Desert Storm-related PTSD, and Archie invited him to stay with them; Hiram shut down Veronica’s rum empire with a cease-and-desist, so she partnered with Cheryl on a maple syrup-based rum concoction; and nothing especially weird or supernatural happened? It’s a miracle!