Riverdale‘s fall finale tied up a few storylines while introducing some new ones — and also added a big twist to the “Jughead is dead” flash-forwards.

Jughead submits his Baxter Brothers story to his class at Stonewall Prep, and Mr. DuPont calls it “outstanding,” naming him the winner of the contest to write the next book. But as he hands Jughead a contract to sign, he reminds him that he has to “play by the rules.” Before he signs, he wants to find out if his grandfather Forsythe is still out there, and thanks to some help from Charles, tracks down the old man, who’s living in a converted bus in a neighboring town. Jughead tells him his conspiracy theory, but Forsythe clears things up: He did write the first Baxter Brothers book, but he sold it to DuPont for a measly five thousand dollars. The bitterness over the sale led him to drink, and he still regrets how badly he treated F.P. and his family.

Forsythe counsels Jughead to “seize the opportunities you’re being given,” and Jughead convinces F.P. to give his absentee dad another chance. When Jughead returns to the converted bus, though, Forsythe has vanished, and F.P. isn’t surprised that his dad bailed out once again. Jughead signs the Baxter Brothers contract and promptly receives a note telling him to go to the North Woods, where he finds a ritual ceremony set up, with Bret and Donna among those welcoming him to the Quill & Skull society. As part of the ceremony, Jughead smashes a skull with a rock and finds a key inside. (But what does that key unlock, hmmm?)

Jughead’s luck is going to run out soon, though, it seems. We end with another ominous flash-forward: Archie stands over Jughead’s lifeless body and confirms he’s dead, before asking Betty, “What did you do?” And Jughead’s love is still clutching a rock in her hand. Say it ain’t so, Betty! 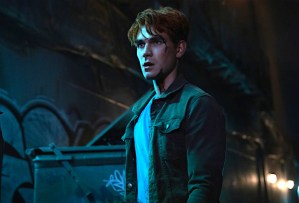 HERO COMPLEX | Archie admits to F.P. he’s the masked vigilante who’s been roaming the mean streets of Riverdale, and though F.P. warns him to concentrate on running the center, Archie is determined to make sure Dodger and his family don’t hurt anyone else. After a few kids from the center get beat up, Archie takes revenge — along with F.P., who dons his Serpent jacket to help Archie pummel Dodger’s brothers Bill and Fagin. F.P. pays the price, though: As he and Archie are basking in their victory at Pop’s, a masked assailant runs in and shoots F.P. in the chest before fleeing.

It’s just a flesh wound, but Archie chases down Dodger and his mom before they leave town, and he and Dodger get into a back alley brawl — while Veronica and Kevin sing “Saturday Night’s Alright for Fighting” at the speakeasy, natch. A raging Archie beats Dodger into a bloody pulp and warns his mom he’ll kill them if they ever come back to Riverdale… just as his kids arrive to see it. Archie is ashamed of what he’s become, and sobs to his mom it’s not fair that people like Dodger live while heroes like Fred are dead. Mary reminds him he’s still grieving, but Archie calls himself a “monster”… and wants some help with processing his anger. Paging Mrs. Burble! 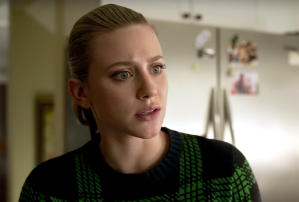 BETTY VS. BETTY | Speaking of Riverdale characters who need serious psychiatric help: Betty is given a fresh mystery to solve when her sister Polly mutilates a nurse and claims to have no memory of the attack. Then Alice receives a phone call, hangs up without speaking… and grabs a kitchen knife before advancing menacingly towards Betty. She snaps out of it when Betty snaps her fingers, and Betty concludes that Polly received a similar call, putting her in a hypnotic state. But who’s the hypnotist?

If you guessed it had something to do with The Farm, you win a free milkshake at Pop’s: Evelyn is actually the one making the calls from behind bars. She turns her victims into “Betty,” who’s compelled to kill Dark Betty, by saying the trigger word “tangerine” three times in a row. Betty has a vision of her younger self killing poor Caramel and decides she needs to break the cycle, so she has Charles put her under, where she takes the rock out of young Betty’s hand and saves her from killing Caramel. Back at home, Betty seals her victory over Dark Betty by smashing her bedroom mirror. Oh well, the seven years of bad luck is worth it, we guess.

* Cheryl smoked out her mom Penelope as the one gaslighting her — literally — by setting off a bug bomb inside Thistle House, where Penelope’s been hiding inside the walls. Penelope admitted she wanted to destroy the happiness Cheryl had found with “Jason,” and Cheryl sentenced her to an indefinite (and involuntary) stay in the gang’s secret bunker. She also said a tearful goodbye to Jason, sending his body down Sweet Water River in a flaming boat, Viking funeral-style.

* Veronica’s feud with her dad Hiram continued to rage, with Hiram taunting her about having to attend Riverdale Community College after she impulsively turned down Harvard. She had an interview lined up with Columbia, but Hiram stepped in and invited the Columbia rep to the speakeasy, in time to see an underage Ronnie belt out a tune in a liquor-filled club. (She still has a shot at Columbia, though.) Plus, Hiram foiled Veronica’s plans to copy the family rum recipe — acquired from her abuelita — by presenting his daughter with a patent and threatening to sue her if she violated it.

* Archie got a big surprise at the very end: a visit from Fred’s brother Frank, who Archie apparently has never met. Maybe this will help him find some closure?

* So F.P got shot in the chest at close range, and he merely ended up in a hospital bed, grumbling that he’s “had worse”? Does he have mutant healing abilities or something?

* A little concerned that Jughead didn’t read that contract very closely before he signed it. Could there be some nefarious stuff hiding in the fine print? Also: Jughead draws a little crown over his signature? Is that legally binding?

* The red flags for Cheryl continue to pile up: She’s now imprisoning her own mother, which has to be a felony of some kind, no matter what Penelope is guilty of. We’ve said it once, we’ll say it again: Run, Toni!

Got thoughts on tonight’s Riverdale fall finale? Grade it in our poll, and then grab a booth in the comments below.