Considering all the traumatic events the Riverdale kids have lived through these past four seasons, they’re probably overdue for a visit with the school counselor, aren’t they?

Suits alum Gina Torres guest-stars this week as Riverdale High counselor Mrs. Burble, and with more creepy videotapes showing up on doorsteps and college acceptance letters in the mail, she invites the students to take a seat and talk about their feelings. First up is Betty, who’s fed up with Alice and her meddling ways. (Betty didn’t get into Yale, and Alice blames that on the birth control pills she found while snooping around in Betty’s room.) Betty unloads on her mom for giving away her college savings to Edgar and The Farm. “Either start treating me like an adult, or I will not be in your life,” she firmly tells Alice, who admits that she might be holding on too tight because she’s afraid of losing another child — and she loves Betty more than her other kids, too! (Ouch, that has to hurt, Polly.)

Next on Mrs. Burble’s couch is Archie, who’s been falling asleep in class — because he’s been up all night fighting crime, of course. Instead of going to college, he tells her, he’s going to stay and “clean up the town,” and he confesses to his masked vigilante ways, even though she tells him she’s obligated to report any crimes. Burble thinks this is all just his way of acting out his grief and anger in the wake of Fred’s death, and he lashes out at her at first, but then ends up breaking down in sobs. She encourages him to reach out for help, and Archie sets up an anonymous tip line so people can report crimes… before tossing his vigilante mask in the trash. 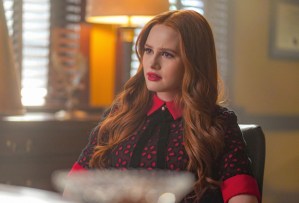 Cheryl takes a turn with Mrs. Burble after Principal Honey threatens to bring in an adult coach to take over the Vixens — and boy, does she need some mental health care. She’s prickly at first (“I don’t talk to trade school flunkies about my feelings”), but eventually tells Burble she’s been talking to her dead brother Jason and fears she might be losing her mind. After hearing about Julian the demon doll, Burble actually thinks someone is gaslighting Cheryl, and arranges for her to have a chimerism test, to determine if she really absorbed her triplet brother in the womb, like Nana Rose said. Burble does recommend that an adult take over the Vixens, though, so Cheryl can focus on herself.

Meanwhile, Veronica gets some good news: She got into Harvard! The bad news, though: Her dad Hiram, a Harvard alum himself, evidently pulled some strings to get her in, and she tells Mrs. Burble her dreams of going there are now ruined, because she’ll never know if she could’ve gotten in on her own. She spills out the whole sordid saga between her and her dad, and Burble thinks they have an unhealthy “obsession” with each other that goes beyond typical teenage angst. She points out how Ronnie is actually becoming a lot like her dad, building her own business empire, and pushes her to cut all ties with Hiram to break the cycle. 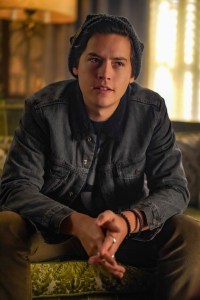 Even Jughead ends up chatting with Mrs. Burble while he’s back at Riverdale High fetching his transcript, and like Cheryl, he resists opening up to her at first. But when he spins out the whole Baxter Brothers tale for her, she pegs him as having a “persecution complex” and challenges him to concentrate on his writing rather than chasing down wild conspiracy theories. She also reminds him that his dad F.P. came from nothing and eventually became sheriff, and Jughead leaves with a newfound appreciation for his pops, giving him a big hug when he gets home. Aw.

Mrs. Burble certainly earned her public-school paycheck this week: Betty goes home to find an acceptance letter and a check from her mom — “I love you the most, too, Mom,” she tells Alice — and Cheryl’s test results say she didn’t absorb a triplet, so she knows she’s being manipulated. Plus, Veronica confronts Hiram and informs him she’ll be attending Yale, not Harvard, and also intends to destroy his liquor empire by making a better rum than he does! And she’s not even old enough to drink it!

But some old habits die hard: When Archie gets a call on the tip line from a scared kid about some guy abusing his mom, he fishes his mask out of the trash and goes back on the warpath. Jughead, too, is back on the conspiracy beat, noting that all the authors who were in the Quill & Skull literary society with his grandpa and Mr. DuPont later died under mysterious circumstances. Hmmm… were they all murdered? This sure sounds like a case for the Jones and Cooper Detective Agency.

* We got another flash-forward, with Archie, Betty and Veronica standing in a police lineup and Jughead’s classmates Bret and Donna telling F.P. that those three are definitely “the kids we saw kill Jughead.” Again, there’s no way any of that actually happened, but we’ll play along for now, Riverdale.

* Boy, Mrs. Burble sure kept a level head, even while these teens were throwing some outlandish stories at her, didn’t she? We’d love to see her again, because Riverdale High could definitely use her — but we also understand that Gina Torres is in high demand these days.

* Archie also informed his mom Mary that he’s moving out of the house, to keep her safe from villains like Dodger. Yeah, but they still know your mother lives there, Archie, remember? He’s never been a master strategist, that one.

* I do appreciate that Cheryl knows the origin of the term “gaslighting”: She asks Mrs. Burble, “Like Ingrid Bergman?” Wouldn’t have pegged her for a Turner Classic Movies buff.

* So Alice was actually undercover and trying to expose The Farm, but still handed over all of Betty’s college savings to Edgar? Yeah, something still doesn’t quite add up there.

* Harvard, Yale… wow, this public school in a tiny town is really cranking out a bunch of Ivy Leaguers, huh? Especially since we almost never see them set foot in a classroom or crack open a book?