As a massive ice storm rolls into town, Archie decides to keep the community center open on Thanksgiving so the local kids have somewhere to go. Veronica donates a bunch of food and cooking equipment — including a deep fryer, so Archie can deep-fry a turkey just like Fred used to. (Aw. He and Mary also take time out to lay some flowers at Fred’s grave.) But Dodger’s family isn’t feeling so warm and fuzzy: After seeing him cling to life in a hospital bed, Dodger’s mom and brothers vow vengeance on whoever put him there… and set their sights on Archie, of course.

They crash Archie’s Thanksgiving dinner at the community center just as he’s deep-frying the bird, with Dodger’s mom pulling out a gun and taking the whole room hostage. She’s convinced that “Carrot Top” (heh) put her boy in the hospital and pushes him to confess. But just as he’s about to, the deep fryer overheats and explodes, providing enough distraction so Archie can knock the gun away and Mary can grab it, forcing Dodger’s family to flee. The good guys all end up having a cozy Turkey Day dinner, and Mary thinks the explosion was a sign that Fred is looking out for them from above… so Archie officially dedicates the community center to Fred’s memory, with a nice photo and a plaque. Once again: Aw! 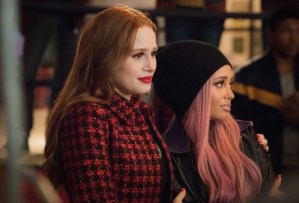 WHO WANTS PIE? | Cheryl and Toni’s Thanksgiving dinner is much creepier: They invite over a still-suspicious Aunt Cricket and Cousin Fester (yes, you read that right), where Nana Rose spins the tale of the Blossoms’ very first Thanksgiving. The wagon-bound settlers, she says, were stranded by a nasty ice storm and ended up starving… and eating each other to survive. Cheryl adds that the meat pies her aunt and cousin are eating… have bits of Uncle Bedford in them. (Don’t worry: It was really just lamb.) She scares Cricket and Fester away by wheeling out Jason for dessert, and she and Toni dump Uncle Bedford’s body in Sweet Water River before it freezes. “By the time spring thaw comes around, the salmon will have gobbled up his eyes,” Cheryl chirps happily. (Toni, you’re free to leave anytime, you know.) 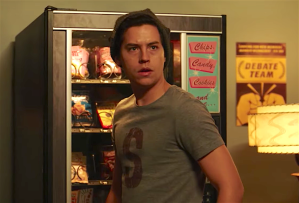 PINNED DOWN | Jughead and Betty try to have a romantic Thanksgiving together at Stonewall Prep, pulling together a dinner out of what’s left in the vending machines. But Jughead is interrupted by an intruder wearing a rabbit mask and brandishing an axe — before Betty swats the guy with a golf club. It’s Brett, of course, and Donna, who say they were just playing a prank. (Yeah, get a sense of humor, Jones!) But Jughead suspects they may have had something to do with Mr. Chipping’s supposed “suicide,” after they find a photo of Chipping wearing a pin for a secret society called Quill & Skull. His suspicions only grow when a suicide note from Chipping falls out of Brett’s jacket… and Betty finds Chipping’s pin in Donna’s room while snooping around.

Donna has an explanation, though: She and Chipping were having an affair, and he got aggressive when she tried to break it off. Betty doesn’t trust her and urges Jughead to go to the headmaster, but Donna beats him to it, telling all about her tryst with Mr. Chipping. Betty puts a big black X over Mr. Chipping’s face on her brand-new conspiracy bulletin board — about time she made a new one for Season 4! — but hey, what’s with the hidden video camera in Jughead’s room recording his intimate times with Betty, hmmm? 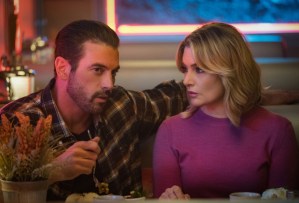 * F.P. and Alice ended up sharing an uncomfortable Thanksgiving dinner with a newly elected Hiram and Hermione in a booth at Pop’s. They got along OK at first, reminiscing about the old days, but things got ugly over a few shots of rum at the speakeasy: F.P. chafed at Hiram ordering him around as mayor, and Hiram is still sore about F.P.’s role in that little assassination attempt on him. F.P. ended up holding a broken rum bottle to Hiram’s throat, and contemplated quitting as sheriff to rejoin the Serpents. But Alice tells him he just can be sheriff and a Serpent. Hey, in this town, why not?

* We didn’t get a flash-forward to Jughead’s “death” this week — but it’s looking more and more like it involves Brett, Donna and that secret society. Does he fake his death to outsmart them? Or is it all just part of the murder mystery he’s writing for class? (Also, until we see Mr. Chipping’s cold dead body, I won’t believe he’s actually dead. And maybe not even then.)

* When F.P. went to check in on Dodger at the hospital, he had vanished, along with his family. Yep, it’s a safe bet they’ll be back — and mighty ticked off.

* Hiram won the mayoral race by running unopposed… but he just announced his candidacy a couple weeks ago. So there was no one running at that point? And wasn’t Hermione the mayor a minute ago? Riverdale politics are so confusing.

* So Cheryl’s plan was to trick Aunt Cricket and Cousin Fester into thinking they ate their dead husband/father’s remains, and then — threaten to prosecute them for cannibalism if they went to the cops? Which they didn’t even actually commit? Do I have that right? Quite flimsy, Miss Blossom.

* A public service announcement from Riverdale: Never attempt to deep-fry a turkey indoors… unless you’re being held hostage at gunpoint and need a distraction. Then by all means, go for it.