Of all the Whitly family members we would have expected to see covered in blood after brutally stabbing someone to death, Ainsley Whitly was on the bottom of that list.

And yet, in the final moments of Monday’s Prodigal Son finale, it was Malcolm Bright’s sister who unexpectedly killed Dermot Mulroney’s slimy Nicholas Endicott. Though it seemed at first like Malcolm was going to shoot Nicholas, he hesitated when he realized killing Nicholas would just make him more like his father. Then, moments later, Ainsley came up behind Nicholas and slit his throat, then finished the job by stabbing him in the chest seven (!) times.

“What just happened?” a blood-spattered Ainsley asked Malcolm, as if she were coming out of a trance. But Malcolm’s attempt to comfort his sister was interrupted by a phone call from their father, who had just escaped a sticky situation of his own in prison. And while Malcolm didn’t explicitly reveal that Ainsley had murdered Nicholas, he did hint to his father that she had done something drastic — and Martin couldn’t have been prouder. “My girl!” Martin beamed, ending the episode (and potentially the entire series, which has yet to be renewed for Season 2).

Elsewhere in the finale, Gil was rushed to emergency surgery after Nicholas’ assistant stabbed him, and Malcolm finally came face-to-face with Sophie Sanders, better known as the Girl in the Box. What’s more, Sophie confessed to murdering Eddie, the man who killed Eve — but Malcolm couldn’t bring himself to turn her in.

Although Prodigal Son was one of many series to shut down production over coronavirus concerns, Monday’s episode actually was the intended finale, due to the order in which episodes were filmed; Episodes 19 and 20, however, could not be completed. Below, series co-creators Chris Fedak and Sam Sklaver discuss how the season was impacted by those lost episodes, as well as how that Ainsley twist would play out in Season 2.

TVLINE | This production shutdown put you in an interesting place, given that you were able to film your intended finale but had to scrap Episodes 19 and 20. Did losing those two hours force you to change the episodes that did air?
CHRIS FEDAK | Everything was changing very quickly in that last week before production went down. As Sam and I were looking at the situation in New York, we got the very strong impression that we’d be shutting down, and we’d be shutting down for a while. What we did was, we quickly rewrote Episodes 19 and 20 — and those episodes are fantastic, we hope to come back to them at some point — and we turned them into two scenes that became the first two scenes of Episode 21. Essentially, we scrapped those two episodes, and we linked the end of Episode 18 to the beginning of Episode 21.
SAM SKLAVER | We were hoping to tell a five-episode story with [Nicholas Endicott]. We would meet him in Episode 18, as we did, and he was a very lovely character, and he was a romantic interest to Jessica. And he would remain a romantic interest for a while, and then we would realize that Nicholas Endicott was a monster. We had a much longer game plan with Dermot, because he’s so fabulous. We wanted to use him as much as possible, and that’s really what we had to cut short.

When we only had a few days left to shoot, we were like, “Oh, shoot, we have to turn Nicholas into a bad guy.” That was [originally] a whole episode, when they realized that. So we had to bring in Anna [Eilinsfeld], who plays Sophie, and have her say, “Nicholas Endicott is a monster.” We were very fortunate, though, in that once we realized all we had to do was turn Nicholas into a bad guy and deal with Eve’s death, somehow it could flow pretty seamlessly from Episode 18 to Episode 21, just with shooting those two scenes. We weren’t able to do everything we wanted, but we were so fortunate in that we got to end the season with the story that we had always wanted to tell since we first sold this show to Fox. It was fortunate for us, and we wouldn’t have been able to do any of this without our post-production team. 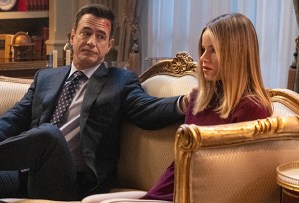 TVLINE | Outside of the Nicholas arc, were there other storylines from those two lost episodes that you’d like to fold into Season 2 somehow?
FEDAK | Absolutely. We had two very good episodes that allowed us to explore two things that we’d wanted to get into from the beginning of the season: One had to do with exorcism, and the other one had to do with technology. Those were the genres that we were stepping into in those weeks. And the other thing we didn’t get to touch was watching Ainsley do her thing as an investigative reporter. We had some fun stuff that we wanted to do there.
SKLAVER | And for the very niche audience who’s a fan, we had a new car for Gil. [Laughs] His LeMans got destroyed by Bright jumping out of a window in Episode 13, and we had a really great thing with Gil finally getting a new car. I know Lou Diamond Phillips was very excited about that, as well. We need to work that story back in, most importantly.

TVLINE | Tell me about the Ainsley twist in this episode. Did the idea of making her a killer come up as you outlined this finale, or had you been building toward this all season?
FEDAK | It was something we were intentionally building toward. We always knew this was something we wanted to play with when we started talking about the season, in regards to Ainsley’s psychology as opposed to Bright’s. It’s also a big part of where we’re excited to go next year.
SKLAVER | The story that Ainsley always told herself was that she was too young to be affected by her father, but when Chris and I started thinking about these characters, we thought there’s no way she wasn’t affected by her father. She was just dealing with it differently. So we kind of loved the misdirect that all the attention is on Bright, who is older and had a stronger relationship with his father, but of course Ainsley was also affected by it. Trying to find a way to get to that was always the plan, because Halston Sage is such a rockstar, and in exploring this central dynamic of “like father, like son,” we also wanted to see what it would do to his daughter, as well.

TVLINE | I found Martin’s “My girl!” exclamation really interesting. Should we take that to mean Ainsley will be more of the focus in Season 2?
FEDAK | Ainsley is still a very big part of the show. We have a lot of fun getting into the psychology of our characters, and she’s as much a mystery now as she was at the beginning of this year. That’s something we’d like to explore, and whenever we’re breaking down our stories, we not only break down the mystery of what people do, but also the mystery of what’s happening inside their minds. It’s definitely going to be a big part of Season 2.

TVLINE | What kind of toll is this going to take on her psyche? It’s not like she seemed to relish killing Nicholas; it was almost like she came out of a fog once it was done. How will we see that manifest?
FEDAK | I only want to dip my toe into the story of Season 2, but what you’re seeing in that moment is exactly what we were going for on the page. You’re seeing a very complicated reaction to a very stressful and dynamic situation, and the ramifications of that will be dealt with next year — not only for her, but also for her brother, who’s been dealing with his father for all these years and now has to try and understand his sister and what happened in that moment. But that complexity is our intention.
SKLAVER | Luckily, Chris and I have never slit a man’s throat and stabbed him six times like Ainsley does.
FEDAK | [Laughs]
SKLAVER | But I have to imagine that it does change you. [Laughs] It’s not something you can just tuck away, or if it is something you try to tuck away, as we’ve explored throughout the season, you can’t bury ghosts and trauma. They will always come back to you. So we’re afraid, but we’re not afraid of exploring it.

TVLINE | The Girl in the Box storyline was wrapped up pretty thoroughly in this episode. Looking ahead, do you intend to tell more stories that involve Malcolm investigating his father’s past victims?
FEDAK | This is a show about memory, and it’s about what happened in our pasts and how it defines us. In this season, we went back to the Girl in the Box because we were fascinated with who she was and what she meant to Bright, and also with Bright discovering that his father was a killer. There are other parts of Bright’s past that we can’t wait to get into. What was it like being a kid with your father on trial for murder? That was the biggest trial in New York in the 1990s, and that’s a place we want to explore. There are still other revelations for us to get into.
SKLAVER | And Martin Whitly killed 23 people that we know of, but there could easily be more. And Martin’s own past is something that we’re very excited to get into. What was Martin’s childhood like? How does someone like Martin get made? The Girl in the Box was a very poignant story to tell because it was a connection that the two of them had, and it was some of Bright’s memories that we could explore. But going back to 1998 and before that, it’s very rich territory.

With that, I hand it over to you. What did you think of Prodigal Son‘s finale? Grade it in our poll below, then drop a comment with your reactions!