Mindy Kaling‘s new Netflix series, Never Have I Ever, chronicles the life of a first generation Indian-American girl figuring out how to navigate the expectations of both her high school peers and her traditional family. So it’s fitting that the success of the show’s casting process hinged on a bit of teen rebellion.

“Listen, there’s so many incredibly successful teen shows where… the actors are, like, 28. And for some reason, if you do a really sexy show, it’s really disturbing to see people who are actually teenagers kiss and have sex,” Kaling tells TVLine. “So for Riverdale, it makes total sense to have older actors.”

But Kaling says she and showrunner Lang Fisher, with whom she collaborated on The Mindy Project, wanted a different feel for their awkward, coming-of-age comedy, which begins streaming on Netflix today. (Watch a trailer.)

“We were such fans of shows like Freaks and Geeks, where the kids are so authentic — they really seem that age — that we had to do the open casting call. Because, at least in the Indian community, it’s not like this thing where Indian parents who are in their 40s and 50s are like, ‘I can’t wait to get my daughter into acting on camera!'” She laughs. “So we had to let the kids take things into their own hands and film their own auditions.” 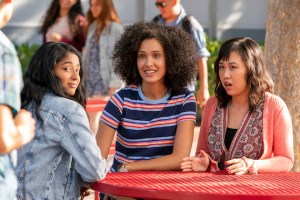 An open casting call yielded more than 15,000 submissions. Eventually, Kaling & Co. chose newcomer Maitreyi Ramakrishnan to play Devi, a teen who is very smart, very into boys and very much rocked by the recent death of her dad, Mohan (played by Heroes‘ Senhil Ramamurthy). We meet Devi at the start of her sophomore year of high school, when she and her two best friends Fabiola (Lee Rodriguez) and Eleanor (Legends of Tomorrow‘s Ramona Young) are determined to get some lovin’ as soon as possible.

But don’t worry, Kaling says: This isn’t American Pie all over again.

“We literally have a scene where they’re reading up about sex and sex positions and Kegels and stuff, [but] they’re never in a situation where they can ever use it,” she previews. “There’s not a ton of sexy situations this character is going to be in, because of her circumstance, and her personality and the kind of school she goes to.” 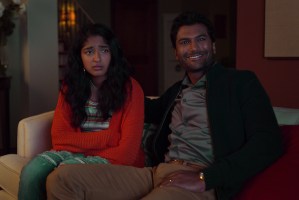 However, Kaling says she and Fisher did want to explore some more mature themes when it came to how Devi and her mother Nalini (The Night Of‘s Poorna Jagannathan) handle their grief over Mohan’s unexpected passing.

“We both lost parents, and we were like, ‘It would be so great to — in a show that’s a comedy show — be able to deal with a character who is unable to handle her grief. Especially in a lot of Asian communities and minority communities, dealing with grief, or mental health, there’s still such a stigma attached to it.” (To that end, the show enlisted someone rather unexpected to provide the voice of an all-knowing narrator: We won’t tell you exactly who it is or how it ties in, but the choice is inspired.)

Since Mindy wrapped in 2017, Kaling’s small-screen appearances include recurring on The Morning Show and Champions, the short-lived NBC comedy she co-created with Charlie Grandy. But she’s got no plans to step in front of the camera on Never… at least, not yet. “I was pretty jealous at the end of shooting the 10 episodes,” she says, laughing. “I was like, why did I not write myself part of this show? I’m freaking Indian. If I ever had a show, this one makes the most sense for me to be in it!”

Of course, we couldn’t let Kaling go without asking her for an update on the great-yet-contentious love story between Mindy Project‘s Drs. Lahiri and Castellano.

“I am kind of a skeptical, cynical person, in general. So, I always feel like everybody breaks up,” she says slowly. “But I will say that, and especially a couple as tumultuous as them… But you think that Danny is old-fashioned enough, that when they have kids — and they probably had another kid — that they would just try to make it work… I think they kind of drive each other crazy, but they have a great chemistry, and they push each other’s buttons, both way positive and negative. So, yeah.  I’m going to say they’d be together.”