Kimmy Schmidt might be unbreakable, but she can also be seriously indecisive — and that’s where you come in.

Netflix on Monday released a full-length trailer for Unbreakable Kimmy Schmidt: Kimmy vs. the Reverend, an interactive special that will let viewers decide how Kimmy’s final adventure shakes out.

Premiering Tuesday, May 12, Kimmy vs. the Reverend finds Ellie Kemper’s titular heroine attempting to thwart Richard Wayne Gary Wayne (Jon Hamm), who reveals in the trailer above that there’s another underground bunker where he’s keeping women. “Will you foil the Reverend’s evil plan and get Kimmy to her wedding on time? Or will you accidentally start a war against the robots?” the logline asks. (So many options!)

Though Netflix previously released a short teaser for the special, this new trailer gives us our first glimpse at the choices we’ll have to make for Kimmy. Should she make out with her fiancé (played by Daniel Radcliffe), or continue planning their wedding? Wait 4,000 minutes for an Uber to arrive, or just walk? And fear not: It seems you’ll get a do-over if you accidentally kill the protagonist.

Check out the full-length Kimmy Schmidt trailer above (as well as the key art below), then hit the comments and tell us if you’ll be playing! 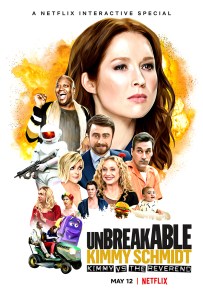