Do not adjust your television set: Though it goes against everything we know about her, Emma truly is happy and relaxed at the start of Vida‘s third and final season. And Lyn is crushing it at both being a successful business owner and staying away from Johnny. Might this be a corner turned?

Maybe we shouldn’t jinx it. But it’s just that Emma and Nico seem so happy at the start of the episode, and that levity continues even when Zoe — Nico’s ex — shows up at the bar, drinks way too much and has to be carried out at the end of the evening. The old Emma would’ve cut and run, but this loose new Emmy merely takes things in stride. By the end of the hour, Nico has moved a few of her things into Emma’s bedroom… y’know, just until she can find a new place.

Lyn and Rudy are doing well, too. She’s riding high after the bar’s music series gets a good write-up in the local press. “I’m going to make Vida into the spot of what’s happening and now in Latinx culture,” she tells him, but all he cares about is whether she’ll accompany him to a party his mom is throwing. Lyn happily agrees both to attend and to be introduced as his girlfriend. 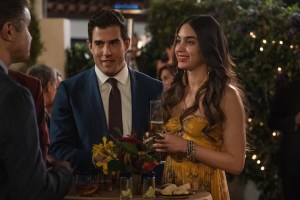 But she misses the memo on the attire (cocktail, though she wears a sundress) and doesn’t speak Spanish fluently, both of which Rudy’s mother considers serious faults. Feeling out of place, she downs Champagne and winds up smoking a cigarette with — and nearly kissing — a Polish cater waiter out by the pool before she realizes that she can handle any situation thrown at her. “I adapt. I survive. That’s my super power,” she muses, swanning back into the party and holding court with Rudy’s friends… much to his mother’s consternation.

Since Mari’s no longer at Emma and Lyn’s and she can’t go home, she’s living in the office at Johnny’s garage. Johnny is obsessed with his infant daughter and determined to have a fresh start with his wife. “A baby changes you, man. It changes your priorities,” Johnny tells his sister. “Karla and I are making it work.”

The members of Vigilantes have painted coconuts over the faces on the bar’s mural and continue to protest outside; internally, though, the group is mad at Mari for not helping out more when Yoli got arrested for throwing soap at Lyn. Mari sneaks over to Vida and asks Emma not to press charges, which could mess with Yoli’s Deferred Action for Childhood Arrivals status. Then she suggests that Lyn and Emma support more local groups to show that they’re actually committed to making the neighborhood better. A frosty Emmy tells Mari that she’d never mess with someone’s DACA status — her father was undocumented, she points out, and “it didn’t end well for him” — but she also forbids Mari from ever returning to the building.

The next morning, Emma is stepping out to grab yogurt when she runs into Eddy, who’s leaving a letter under her door. “Just know, I’ve seen him with my own eyes,” the older woman says before leaving. Then Emma sits down on a sidewalk bench and reads the letter, which tells the sisters that their father is alive and living nearby, not dead as they’d always believed. Emma hands the note to Lyn when she comes home, and both of the women look shocked.