Good riddance, you slimy, raping, bad boomerang of a pirate.

Yep, this is the week that Outlander offs Stephen Bonnet, the smuggler who has tormented Jamie Fraser and his family since Season 4, finally meets his end.

In a moment, we’ll hear from Ed Speleers, who played the dastardly character. But first, a brief recap of the hour:

* Bonnet and Gerald Forbes meet in Wilmington and plot for Bonnet to make a legal claim that Jeremiah is his son. Once that’s set, the plan is for Jocasta and Duncan Innes to have a terrible “accident” that will give River Run to Jem/Bonnet and, in turn, pay a substantial sum to Forbes for his role in the proceedings.

* Jamie, Roger and Young Ian — the latter posing as “Alexander Malcolm” — go to Wylie’s Landing and wait for Bonnet to arrive so they can kill him. But he sends some of his sailors, instead. Eventually, after some coercion at knifepoint, one of Bonnet’s men suggests that Fraser & Co. might find Bonnet at a specific brothel in town. 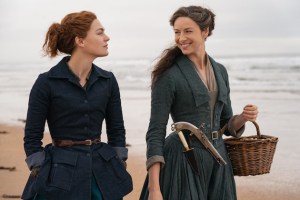 * Meanwhile, Claire and Brianna do some shopping and then head out to the seashore. Unbeknownst to them, Bonnet tracks them to the beach, where he knocks out Claire and kidnaps Bree. “Can’t we just let bygone be bygones?” he asks Bree when she wakes up on his private island. He says he wants to do right by her and their son, and “be a real father.” When he later asks her for lessons on how to be a true gentleman, Brianna realizes that playing along is pretty much the only way she’s not going to end up dead — at least, not for a while — so she pretends that she’s invested in helping him better himself.

* Their bizarre interaction includes Bonnet’s sharing details of his sad childhood as an orphan. But when he kisses her and it takes all of her power not to vomit on his face, he can tell, and that enrages him. “I’m not good enough for you, eh?” he says,  I’ll give you a reason to despise me.” Then he grabs a local prostitute who’s been acting as one of his servants and has violent, dubious consensual sex with her on the sofa while a horrified Brianna quickly backs out of the room.

* That prostitute winds up back at the brothel Bonnet’s men suggested, so Claire asks her if she can help find Bree. That woman begrudgingly points them toward Bonnet’s place on Ocracoke Island after Claire helps her with a hip problem that’s causing her pain and gives her some money for new shoes.

* Bonnet is just about to sell Bree as a sex slave when her family gets to Ocracoke, rescues her and beats the tar out of Bonnet. Jamie eventually leaves it up to his daughter to decide the pirate’s fate, and she chooses to have him returned to Wilmington to face trial for his crimes. 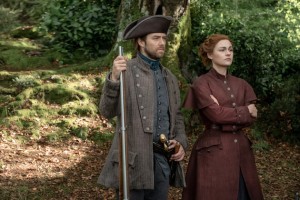 * Bonnet is found guilty and sentenced to death by drowning (which, you may recall, is lifelong fear). So he’s chained to a stake in a tidal bay that will kill him when the waters rise. Hours later, as the tide is about to cover his face, Brianna fires a shot from the shore, hitting him in the head and putting him out of his misery. “Was that mercy, or was it to make sure he’s dead?” Roger asks, but Bree doesn’t answer. (Fun fact: As weird as Bonnet’s storyline in the show is, it’s even more convoluted and strange in the books.)

* Meanwhile, at River Run, Jocasta summons Gerald Forbes to help her bequeath a large part of her fortune to Jamie and his family. The lawyer grows so incensed that Jo is giving away “his” money that he tries to suffocate her. Fortunately, Ulysses comes running when he hears Jo’s bell fall. He breaks Forbes’ neck and then sobs as he realizes how close to death Jocasta came.

Read on to hear Speleers’ thoughts on his final hour of the Starz drama.

TVLINE | This week is Bonnet’s last hurrah. We get depths of him that we haven’t seen before. When did you know this would be the end for him?
I was pretty pissed off, Kim, I’m not going to lie. [Laughs] I was on holiday with my family, with my young children. I was on a beach in Mallorca and I took a phone call saying, “We need to get you in for certain tests and things, makeup tests.” I was like, “What’s this about?” “You have a bullet wound to your head.” I said, “What bullet wound to my head? Am I surviving this?” I then got a script, and I obviously wasn’t.

Look, a villain such as Stephen Bonnet, he doesn’t make it in the books, and there’s no way he’s going to make it in the TV series. Deep down, I knew it was going to come at some point. From a creative standpoint, on the page, it was all the things you look for when you take on a role like this. I’ve been very fortunate with the material that’s been on offer I’ve had some very well fleshed-out writing that has allowed me to really try and get behind the character… This episode — I haven’t seen it, I don’t know how it looks — left the chance to really do that… With a character like that, you need to find the humanity so people can related to him or so you can relate to him, me myself… I’m glad the writers nodded to that and tried to get inside what he may be thinking on a more humane level, I suppose.

TVLINE | Outlander is a very feminist show, and you play a character that raped one of the main female characters. That’s a hard place to start from. How much did you know, going in, that the show eventually would explore what comes up in this episode, such as the things we learn about his past?
Interesting. I read Drums of Autumn, which is the first book Bonnet appears in. It was evident to me that there was a man, as you say, who had a very dark and treacherous past that could’ve gone another way for him with a little bit of love and nurturing along the way… When I read that book originally, you could see there was an overriding ambition to be — whether it was to be a gentleman, the idea hadn’t been pinpointed at that time — but there was definitely an overriding notion that he was striving for something. It was almost like a me-against-the-world attitude, I suppose. And a desire to prove that he could defy people who’d pushed him down previously.

…Coming back to taking on the role in the first place: It’s one of those odd situations as an actor where you know you’re going to have to take on some very controversial, very harrowing themes that are difficult to handle, to discuss. They’re difficult to approach any which way… It’s always a really, really tense subject to even tackle. Sometimes when I meet people who have been affected by it but also people who are fans of the books and the show comment on those scenes and say about the power of them, I find that a difficult thing to listen to because it’s a very, it’s just an incredibly sensitive subject to talk about.

TVLINE | I could not get over how much the little boy who plays Jeremiah looks like you. Did you notice that?
I had the final decision on casting, Kim. [Laughs] He’s a much better looking version than I am. He’ll do very well. [Laughs]

Now it’s your turn. What did you think of the episode? Sound off in the comments below!