When Insecure dished out a Thanksgiving episode Sunday, there was more than turkey and stuffing on the menu. Sides of revelations, intimations and recriminations appeared to put a couple of relationships on life-support. Read on to find out which ones. 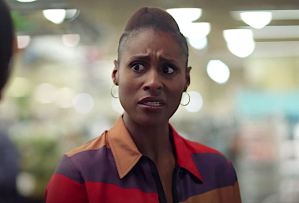 ‘FOR THE RECORD, BRADLEY COOPER’S DOING GREAT’ | Set two months before the block party, “Lowkey Thankful” began with Lawrence suggesting to Condola that, since neither of them had family nearby, they spend the holiday together. When she admitted that she was already hosting a Friendsgiving, he asked if he should add his name to the guest list. “Sure,” she replied. (Hmm… “Sure”? Is that a red flag I see waving?) Later, after learning that an investor had pulled out of Meridian, thereby leaving Lawrence’s chances of being promoted about the same as those of Kelli ever saying something that was SFW, he ran into Issa at Condola’s favorite eatery. When Lawrence’s girlfriend arrived, Issa apologized for stealing her spot. It was just that “the music’s so easy to ignore [here]. They play a lot of Macy Gray.” As Issa beat a hasty retreat, leaving the couple to their date, it was clear that she was as unnerved by their cutesy closeness as Condola had been when she walked in on the exes jokily spoiling movies for one another. For example, “In Love Don’t Cost a Thing, s— got expensive.”

Pre-Thanksgiving grocery-shopping with Issa, Molly shared that she’d just had to accept that her relationship with her father was never going to be the same now that she knew he’d long ago cheated on her mother. In turn, Issa groaned that she and Ahmal had to have dinner with not just their mother’s new boyfriend but his kids, too. “Why can’t I just overeat and binge-drink with my own blood?” she asked. Anyway, she’d still come over to the Carters’ for pie, come hell or high water. Now that Molly and Andrew were exclusive, should she invite him for dinner? she wondered. No way, said Issa. “You’re gonna pull an old Molly and scare his ass away.” Triggered, Molly expressed her skepticism that Issa was as cool as she insisted with Lawrence and Condola’s relationship. “I’m glad your little thruple’s a success,” she cracked. Wasn’t Molly just in one with Dro and his wife? Issa shot back. “At least,” said Molly, winning the volley with a Daniel dig, “I wasn’t f—ing for free weed and toiletries.” Finally, they agreed that they had been “off” the last couple of months — ya think? — and should talk over pie. 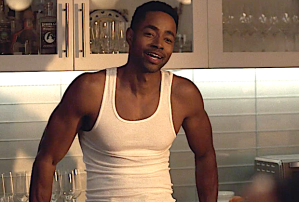 ‘GOBBLE, GOBBLE, I BROUGHT A COUPLE BOTTLES’ | At Condola’s on Thanksgiving, Lawrence was a hit with his honey’s friends, especially Drunk Nikki, who privately told the newcomer that she was so glad her divorced pal had finally found someone to have some casual fun with. After everyone left, he asked his girlfriend if that was all he was, a f— buddy. And had she meant what she’d said during the day about never wanting to get remarried and have a family? Or “are you still getting over your ex?” Taking the question poorly — hope there was some wine left! — Condola remarked, “If anybody should be worried about an ex, it should probably be me.” Lawrence and Issa had the same friends, inside jokes… In fact, they might even still be together if she hadn’t cheated. Right? asked Condola. And just like that, a new elephant sauntered into the room and their relationship. Meanwhile, Issa and Ahmal arrived at their mom’s just as an ambulance did. At first they panicked, then…  “Never mind,” said Ahmal. “It’s just Stanley.” He’d slipped on some gravy, Mom explained. But her kids should stick around, as Stanley’s family was on its way. Pass, said Issa as soon as she and Ahmal were alone. “I don’t f— with adult twins.”

At the Carters’, Molly made the mistake of showing her mom a picture of Andrew… which wound up in brother Curtis’ hands. “Is he crazy and rich?” he asked. Zinger fired, he moved on, leaving Molly’s mom to say that she should’ve invited her boo. “If he’s right for you, he won’t think you’re too much,” she reassured her daughter. Truth! Later, Curtis asked Molly how long she was gonna act weird around their dad. Yeah, he’d made a mistake, Curtis said. But he’d owned it, and he’d made up for it. Throughout the afternoon, Molly got text after text from Issa, first saying she’d be late, then saying, uh, could they talk another time? And what was Issa doing? She was recalling disastrous Thanksgivings past with Ahmal at a Mexican restaurant and admitting that, yeah, she was bugged by Lawrence and Condola. “The person he is now is not the person he was with me,” she observed. “I got the work in progress… She’s reaping all the benefits of his time with me.” Well, she might not be for much longer. As the episode drew to a close, the exes were texting one another.

So, what did you think of “Lowkey Thankful”? Are you curious about what Issa and Lawrence 2.0 would be like? And if Trina was going to spend Thanksgiving with Kelli’s family, uh, shouldn’t we have seen some of it? Hit the comments.