Sunday’s Homeland series finale was generating controversy long before cameras rolled on the episode last year. As showrunner Alex Gansa reveals to TVLine, the big twist at the center of 66-minute swan song — which aired Sunday on Showtime — sparked a vigorous debate between producers and cast members, including leading lady Claire Danes.

Describing the series’ eight-year run as “largely a smooth ride,” Gansa concedes that tensions ran high as production neared on “Prisoners of War,” which found Carrie committing the ultimate act of betrayal against Saul (read Dave Nemetz’s full recap of the episode here). “The conversations got intense about how far Carrie would go and how far she wouldn’t go,” reveals Gansa. “Everyone — cast members, directors, writers — was in a froth…. To say there was some free-floating anxiety would’ve been an understatement.”

In the following finale post mortem Q&A, Gansa reveals how he ultimately arrived at the decision to have Carrie stab Saul in the back by outing his longtime Russian asset, takes us behind-the-scenes of that dramatic final scene between Danes and Mandy Patinkin, sheds light on that stunning flash-forward twist, and, lastly, answers the question sure to be on the minds of Homeland fans everywhere: Is this really, truly, positively the end?

TVLINE | When did you hit upon the idea of Carrie being asked to kill Saul in the finale?
That idea rose to the surface quite late in the [Season 8] story-breaking process, probably while we were breaking Episode 11. We knew we were going to bring the Saul/Carrie story to a climactic close, but I don’t think we really knew how that would play out dramatically until quite late. There were a couple of very important story ideas that came up in the [writers’] room towards the end, and one was the idea that Saul would have a legacy plan in place in case he died to pass the asset on. We came up with that around Episode 10. And the 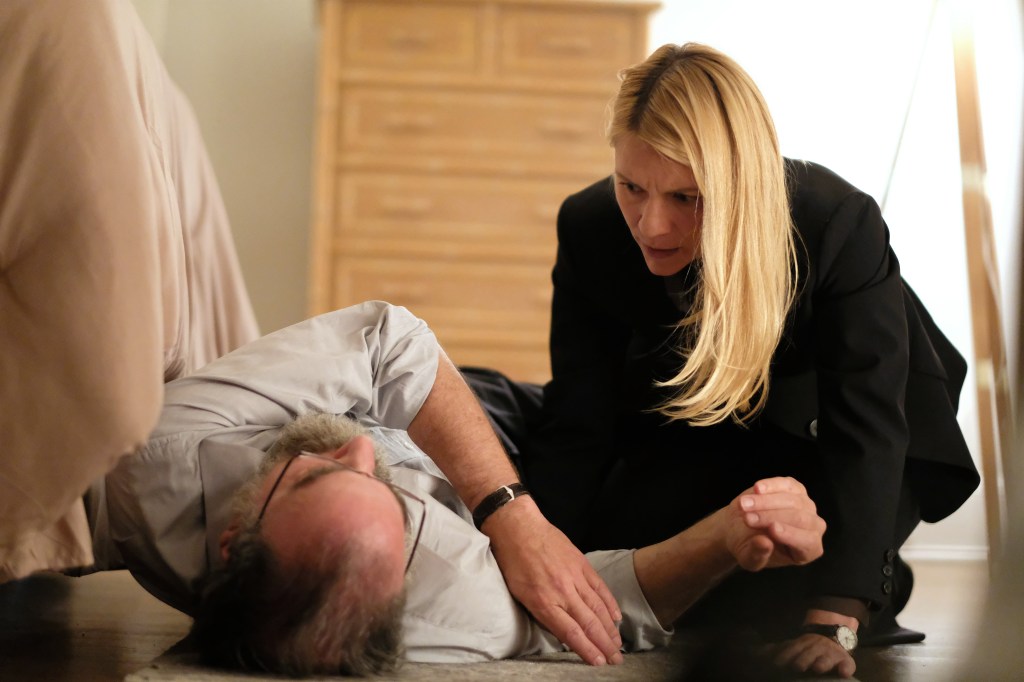 other one was that [his sister] Dorit might have that legacy plan. That she might be the person who Saul entrusted passing the asset on to Carrie. All of that came late in the game and that, naturally, led to idea that Carrie might have to kill Saul in order to get the name of the asset.

TVLINE | Did you ever consider having Carrie actually go through with killing him?
For sure. That [climatic Carrie/Saul] scene went through a lot of iterations before it wound up being the ruse that it eventually wound up being. There were many incarnations of that scene, one of which had her actually [killing him].

TVLINE | Why did you decide not to go there?
I wrote those scenes. And every time I [took another pass at them] I was like, “I just don’t believe Carrie would actually do this.” So we backed out. We backtracked and figured out another way to do it.

TVLINE | For clarification sake, Carrie never really was going to go through with it, right? She was always going to activate Plan B involving Dorit in the event Saul didn’t budge, correct?
That’s the idea. I don’t think that Carrie knew exactly how things would play out when she walked into Saul’s house. But I think she knew she was going to try to manipulate him into giving her the name. And if that didn’t work, she was going to have to take a flyer and hope that she was right in her speculation that Dorit had the envelope.

TVLINE | What was it like shooting that sequence with Claire and Mandy?
That was the last scene they shot together. At the end of it, Sunday [Stevens], the [assistant director] said, “Ladies and gentleman, that is the last Carrie/Saul scene in the history of the show.” And Mandy and Claire just broke down in each other’s arms. The trauma of playing the scene, [combined with] the realization that [they have] been together for 10 years and would never be playing those characters again with each other, [led to] one of the most emotional moments we’ve ever had on set. It was something to behold.

TVLINE | What did Claire and Mandy think of Carrie betraying Saul like that?
As we got nearer and nearer to the finale and as the end was in sight, everybody had very strong opinions about how the show should end. And there was a lot of back and forth. We have a really close team. And it’s been largely a smooth ride. [But] at the end everyone was just feeling all of these emotions and it got intense. The conversations got intense about how far Carrie would go, and how far she wouldn’t go. Whether she would turn the asset in. Whether the asset would get killed. All of those things were so profound in people’s view. And everybody wanted to leave the show in a way where their characters were true to themselves. There was a lot of conversation about that throughout the last few episodes. Everyone — cast members, directors, writers — was in a froth about how to end the show. To say there was some free-floating anxiety would’ve been an understatement.

TVLINE | Was Claire ultimately happy with where you landed?
Very much so. You’ll have to talk to her [because] it was her journey. Carrie is and was such a volatile human being that the thought was she could do anything. And Yevgeny has that line in a previous episode, “From what I’ve seen you can do just about anything.” And my God we have seen Carrie Mathison do just about everything. So the idea that we left Carrie in a place where she belongs, which is being a spy, was satisfying to her as an actor. 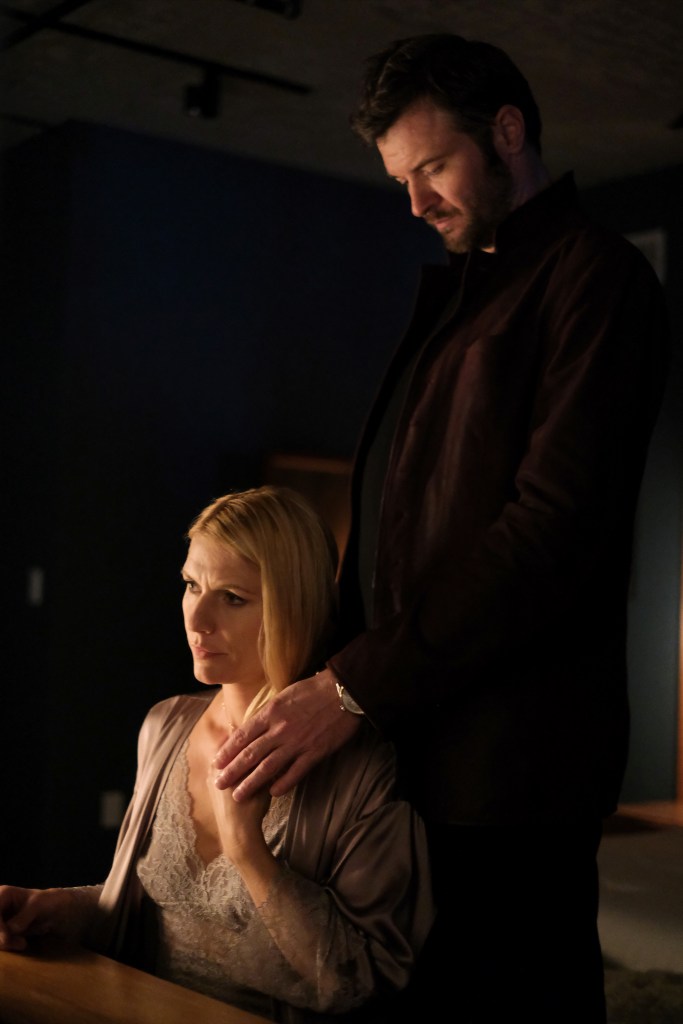 TVLINE | Speaking of Yevgeny, Carrie ends up in a long-term romantic relationship with him and they are living together in Moscow as she begins passing intel to Saul. How real is her relationship with Yevgeny? Does she actually care about him?
This is open to interpretation, but my feeling is that it is a real relationship, in the way that Carrie Mathison has real relationships. She is, by nature, attracted to duplicitous situations. So she can have real feelings for this guy and at the same time be betraying him. These are the situations that Carrie thrives in. And this particular situation is one she can be content in. And almost happy. She’s got a smile on her face at the end.

TVLINE | This ending could’ve also worked as a season finale, with a potential ninth season being all about Carrie working as Saul’s Russian asset. If there had been a Season 9, would you have ended with the same cliffhanger?
It was never an option so that question was never been floated. Nor have I thought about it for a second. [Laughs] The idea is that the story goes on. That’s how we chose to end the series. Carrie is [in Russia] doing her work and communicating with Saul. Maybe the story [of what comes next] lives best in the imagination of our fans.

TVLINE | In the intervening two years that passed between Saul and Carrie’s estrangement and her resurfacing as his Russian asset, has Saul forgiven Carrie?
Not entirely. Obviously a major conflict on the Pakistan/Afghan border was resolved in a way that didn’t lead to a nuclear exchange, so what Carrie did worked. And his greatest fear was that [the U.S.] would be blind to what was happening in Russia — that was one of his strongest arguments against giving Carrie Anna’s name. But, lo and behold, he now has [Carrie] in place in Russia. So one part of that wound looks like it has healed. I don’t think the other wound [i.e. Carrie’s complicity in Anna’s death] will ever be healed. But when Saul looks up at the camera at the end I think you get this sense that he is surprised one more time by this protégé of his and that relationship is on the way to being repaired at some level.

TVLINE | Is this really the end of Carrie Mathison?
Sadly, I really think so. It was such a unique and extraordinary experience. And I think the story ended where it should’ve ended. [Homeland co-creator] Howard [Gordon] says, “Never say never,” but I think all of us are beyond grateful for the experience and are now ready to go on and do something else. Who knows what will happen in five or six years, but, at the moment, I feel like you have seen the last of her.