As Homeland wrapped up an eight-season run on Sunday, Carrie Mathison was asked to save the world one last time — but how steep a price was she willing to pay to do it?

Yevgeny has made it clear: If Carrie wants the President’s flight recorder back from the Russians to prevent nuclear war between the U.S. and Pakistan, she’ll have to kill Saul (!) to expose the identity of his Russian spy. Carrie is torn, and flashes back to Brody’s confession video, where he talks about swearing an oath to defend America against enemies foreign and domestic. Is that what she’s contemplating doing now? Meanwhile, Saul can’t convince that hawk John Zabel to stand down, the Russian intelligence director is gloating that he has the flight recorder and Tasneem announces on TV that Pakistan is arming its tactical nukes. So yeah, now would be a great time to step in and solve this, Carrie. 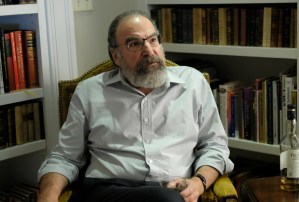 She meets with the Russian liaison, who gives her two liquids to mix together that will make Saul woozy so she can send in (oof) “the kill team.” Carrie also quickly throws together a getaway bag with cash, passports and pills… and tosses in a photo of Franny. (Her sister Maggie tells Saul that Carrie hasn’t contacted her or Franny since she’s been back. Hmmm.) That night, Carrie goes to Saul’s house and finds him listening to blaring opera music — which is not ominous at all. He confronts her about not seeing Franny, but she says she’s been busy: “I came back to try to stop a war… any way I can.” She adds that she knows about his Russian asset and how they communicate. He refuses to give up the asset, saying he’d be “permanently crippling” the U.S. intelligence operation against a known enemy. When Carrie brings up Pakistan, he dismisses it as “a regional problem” and shrugs it off: “Sometimes that’s the cost of doing business.”

A bewildered Carrie rushes into another room and frantically begins mixing the liquids — and when Saul walks in on her, she rubs the liquids on his neck, and he drops to the floor. As the kill team moves in, Carrie begs a woozy Saul to give up the asset’s name: “No one person is worth the lives of hundreds of thousands.” But “she is,” he croaks. The kill team prepares a lethal injection, and a guy holds a syringe next to Saul’s toes as Carrie gives him one last chance. He asks her to come close… and then tells her, “Go f–k yourself.” Carrie hesitates… and then tells the kill team to go to their “fallback” position, “as we discussed.” (Whew.) She leaves Saul in their custody as she rushes off to the airport, telling her old friend: “I had to try.”

Time for Plan B: She jets off to Israel to visit Saul’s sister Dorit — so no flight restrictions on her bail, huh? — and tells her Saul has died after suffering a stroke, asking if Saul left anything for her. (“You’re just like him: always an ulterior motive,” Dorit notes.) She fetches a sealed envelope for Carrie, which holds a thumb drive that has all of the asset’s information on it. Back in D.C, Saul’s captors arouse suspicion when they text Wellington from Saul’s phone that he’s “on his way in”… but his meeting with Wellington isn’t at the office. Wellington alerts the cops, but the kill team clears out once Carrie tells them she has the name they want. 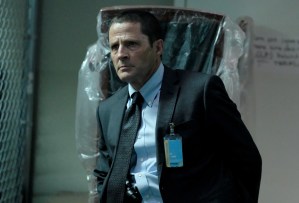 When she passes along the asset’s name to Yevgeny, he can’t believe it: She’s the lead interpreter for Russian’s intelligence agency. Carrie verifies it, though, with a video from Saul (from that thumb drive) confirming he’s been working with her since 1986. Yevgeny passes the name to the Russian intelligence director, and his men look to bring her in while Saul tips off his CIA special ops guy Scott Ryan that the interpreter’s been compromised. It’s a foot race, with Scott and the interpreter fleeing the Russians and barricading themselves in an old storage room. The interpreter knows her time is up, though, and phones Saul, asking to “end this on my own terms.” Scott reluctantly gives her his gun, and she puts it to her head and pulls the trigger as Saul staggers and weeps.

The day is saved: The Russian intelligence director goes on TV to announce they have the flight recorder and it proves Warner’s helicopter wasn’t shot down, and Hayes calls back the U.S. troops… and shuts out Zabel to rely on Wellington from now on. Carrie is still disgusted that the interpreter had to die, but Yevgeny echoes Saul as he tells her it’s just “the cost of doing business.” She thinks her relationship with Saul is ruined, but Yevgeny reassures her that it can be repaired. Carrie looks at him coldly: “I don’t know what it’s like on your side, but it must be very, very lonely.”

But wait! There’s more! We flash-forward to two years later (!), with Carrie living in Moscow and looking very cozy with Yevgeny. She looks around a room plastered with newspaper clippings and conspiracy theories — murder board shout-out! — and gazes at that picture of Franny before they go to a Kamasi Washington jazz concert together. (Of course the last episode of Homeland had to have some jazz in it.) Back in the U.S., Saul packs up to move and receives a phone call looking for a “Professor Rabinow.” He heads to a bookstore and collects a package: an advance copy of Carrie’s tell-all book, Tyranny of Secrets. It’s dedicated to “my daughter, in the hope that one day she will understand.” At the jazz concert, Carrie covertly accepts a package from a mystery brunette, while Saul uses tweezers to extract a message from the spine of Carrie’s book. It’s from her, telling him that the Russian missile system just sold to Iran and Turkey has an exploitable backdoor. “Specs to follow. Stay tuned.” (Ah, if only we could!)

Alright, Homeland junkies, it’s your turn: Give tonight’s series finale a grade in our poll, and then hit the comments to share your thoughts. And then read Michael Ausiello’s comprehensive post mortem with showrunner Alex Gansa.