Who’d have expected that a mock presidential debate between seven drag queens would somehow be less outlandish and more civil than the actual debates we’ve watched on TV in recent years?

The remaining contestants got political on Friday’s Drag Race, transforming into presidential candidates and sashaying down the campaign trail. RuPaul and guest mentor Raven did their best to prepare the ladies for their bi-partisan brawl, from basically handing Heidi N. Closet the perfect slogan (again) to questioning why Widow Von’Du insists on sporting those “biscuit baskets” instead of rocking higher heels.

I also appreciated Ru asking Crystal Methyd, “What is the crystal method?” and was a little surprised when she didn’t have an answer. (Frankly, I’m surprised there hasn’t been more discussion surrounding the queen’s polarizing name, especially considering how much time has been devoted to picking Heidi’s apart.) And was I the last person to find out that Jackie Cox is actually Canadian? Twist after twist!

(Side note: You may have noticed that I basically side-stepped this week’s mini challenge, a gloriously nightmarish parade of life-sized kitty girls. I touched on it earlier this week, but was too scared to revisit it tonight. Cats is still too fresh a wound.) 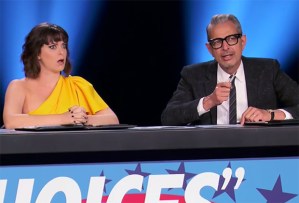 Moderating the big debate were American treasures Rachel Bloom and Jeff Goldblum, the latter of whom received a very warm welcome from Miss Jaida Essence Hall. “Jeff Goldblum is the dinosaur doctor,” she reminded the cameras. “I don’t know if that’s his real life, but I love a man who knows about dinosaurs.” Don’t we all?

Here’s a quick breakdown of how the queens fared: Sherry Pie, who vowed to “take America off its diet,” once again looked like she just stepped out of a John Waters movie, playing a character the judges deemed too familiar; Crystal mulletted her way through the competition, proving that she always means “business in the front, party in the back”; Heidi kept her demeanor sweet and southern, armed with gasps (and gaps) aplenty; Gigi Goode relied on her old robot schtick, which didn’t work nearly as well as it did in the Snatch Game; Jaida was surprisingly hysterical (“The fact is, [Crystal] doesn’t even know who El DeBarge is!”); Widow took the challenge a little too seriously; and Jackie, for reasons unknown, built her entire platform around a “tiresome” joke about her being Canadian.

Speaking of Jackie, I love that the feuding politicians were able to find common ground on one issue: her facial hair. “How can you trust a drag queen when her five o’clock shadow is visible 24 hours out of the day?” Heidi posited, to which Widow added, “If she cannot win the war against her beard, how can she win the wars that we might have to fight for America?” Both very compelling arguments if you ask me.

Drag Race‘s salute to America continued with a stars-and-stripes runway, and (most of) the ladies served our country well. Naturally, the judges gobbled up Gigi’s “Quaker Oats fantasy,” while also praising Jackie’s powerful political statement and Widow’s inspired homage to Black America. But it was Jaida’s explosive red-white-and-blue ensemble that really (fire)worked for the judges, earning her a well-deserved win.

Unsurprisingly, Twitter exploded when Goldblum questioned Jackie’s decision to celebrate her Muslim heritage on the main stage, questioning the culture’s treatment of women and gays. (The islamophobia debates continue on social media, whereas the moment was basically forgotten on screen after Goldblum turned his attention to Gigi’s immaculate tuck.)

Gigi’s abysmal debate performance landed her in the bottom three, but her A+ runway look proved to be her saving grace. (“You will not see me in the bottom again,” she promised Ru.) This left Widow and Jackie to battle it out to Katy Perry’s “Firework,” a perfectly on-the-nose selection to cap off 90 minutes of pure patriotism. Both queens gave it their all, but Jackie’s decision to give comedy over drama — not to mention her more-flexible ensemble — led to her sticking around for another week.

Are you crushed to see Widow leave the competition? Vote in our poll below, then drop a comment with more of your thoughts.