If Jamie Fraser gained anything from Sunday’s Outlander — aside from a healthy fear of snakes — it’s a newfound respect for his son-in-law, Roger Mac.

In Episode 9, the two men bonded during a scary night spent in the woods. And when Jamie thought he might succumb to a nasty viper bite, he urged Roger to kill Stephen Bonnet if he could not.

“For my mistakes, you must do this” he rasped to Roger, who looked horrified at the thought of having to kill anyone — even his wife’s rapist.

“He wants the best for his daughter. He’s very protective, Jamie is. God, what an intimidating father-in-law he would be!” Heughan says, chuckling. He likens Rog’s evolving role to Claire’s in earlier seasons: aka knocking a certain kind of sense into the hardheaded Scot.

“It’s similar to what Claire did to Jamie in that Jamie has an idea about how things should be in his time, and this modern character teaches him there’s another way,” he says. So the relationship between the two men “doesn’t start well, but by the end, I think they find a real respect for each other.” 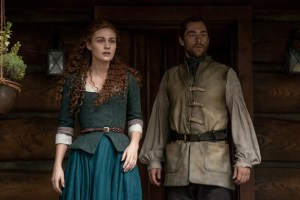 The next episode (Starz, Sunday, 8/7c) will find both Fraser and MacKenzie following through with Jamie’s plan to go to Wylie’s Landing and deal with the Irish smuggler, whom he fears will try to claim Roger and Brianna’s young son (and the land holdings he’s been bequeathed) as his own. The hour will find Jamie looking at Roger Mac as more of an equal than he has in the past; in a preview, Roger even demands that Jamie let him be the one to murder Bonnet.

Jamie is “very practical, and Roger’s not. Roger’s completely impractical but has other skills,” Heughan says. “Jamie probably would wish his daughter had a more capable man in terms of that period [of time], but yeah, he certainly comes into his own, Roger.”