The CW’s The Flash is back this Tuesday with its first new episode in five weeks, following a pandemic-related schedule shuffle. How goes Team Flash’s plan to build a new Speed Force? And is the time nigh for Barry to suspect that wife Iris is actually an imposter?

TVLine hopped on the phone with series star Grant Gustin to get brand-new intel on the shortened season’s final four episodes.

TVLINE | When last we tuned in, Barry had the idea to use his daughter Nora’s journal to help build a new Speed Force. Will that prove to be easier said than done?
For sure. Barry will have the Speed Gauge that Cisco and Caitlin developed to register how much energy he is using and make sure he is not wasting his speed, but in the meantime this artificial Speed Force isn’t going to come together as quickly as we would like it to. And when they eventually do find a way to get it to work, it comes with a pretty big sacrifice for the team.

TVLINE | Will Villains of the Week such as Rag Doll prove to be distractions as well?
The Rag Doll episode [airing this week] changes the dynamic of the team and the West-Allen family moving forward. They’re not just small challenges; they’re going to have lasting effects for the rest of the season. It’s not just a Villain of the Week-type thing, it will affect the show moving forward for while.

TVLINE | Why? Is there some debate about how to handle a problem?
The team doesn’t want Barry to waste his speed, that’s an element for sure, but also Joe is in some serious danger and gets harmed in the process. I don’t want to spoil too much, but the dynamic of the West family and Team Flash is going to be altered for a while because of what happens with Joe and Rag Doll. 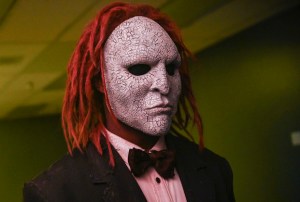 TVLINE | Speaking of Rag Doll, who is a bit of a fan favorite, I have to ask: What is it like witnessing Troy James “do his thing” there on-set? Because at home, we can convince ourselves there are effects being added, some clever editing….
The thing they mostly layer on top of Troy’s performance is the “breaking bones” sound effect when he is bending. But it’s not just during the takes [that he does that], he will just randomly walk toward you [backstage] in a spider crawl. [Laughs] He’s the nicest, most friendly dude, but it’s terrifying once he has that mask on and he’s bending all over the place.

TVLINE | To the audience, Iris has been acting a bit off, sometimes even giving atypical advice — even though it worked out for you in the last episode. The way you’ve been playing it, are these “off” moments registering at all for Barry? Or has the Thawne thing been just distracting enough?
I think Barry has had enough distractions to not catch on as much as he should have sometimes. I’m sure viewers are screaming at Barry in certain moments, like, “How are you not realizing that something is off?!” But he will be the first team member [outside of Wally] to start picking up that something is wrong with Iris, and he starts to get suspicious. There’s a breaking point where he looks back at the past few weeks and realizes this isn’t Iris. 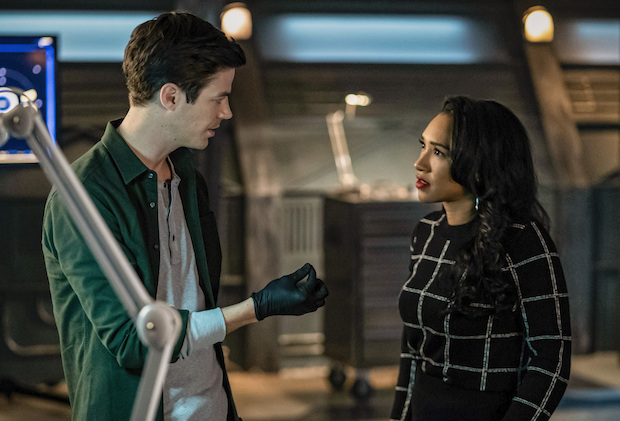 TVLINE | What will it take to give him that kicks in the pants? Does she make a verbal slip-up or…?
It’s a combination of things. It’s a little bit of the stuff she says, but more an emotional connection that’s lacking or not consistent with what they have always had. Barry has an epiphany moment where he shares all of his suspicions with Cecile, and the writers gave me a really fun scene for when it all lands, where I convey all these ideas about what I think is really going on. We had a lot of fun with it.

TVLINE | I’ve had several readers asking if the real Iris’ status as Barry’s “lightning rod” might play a role in him eventually returning to full power.
Not so much, to be honest. There’s an emotional connection that will be used… to figure out how to get Iris out of the Mirrorverse, but it’s not necessarily connected to the whole “lightning rod” idea at this point.

TVLINE | In the episodes we will get this season, is there an especially meaty or emotional scene ahead for you and Candice Patton?
Yeah, right before Barry kind of figures out what’s going on, there’s a big fight scene, essentially, that is going to change the dynamic of Barry and Iris and that relationship moving forward for the rest of the season.