Is it weird to say that, for years, I’ve been looking forward to James Alexander Malcolm MacKenzie Fraser’s closest-yet brush with mortality?

One of the most dramatic interludes in Diana Gabaldon’s The Fiery Cross comes to pass in this week’s Outlander when Jamie gets bitten by a snake and then nearly dies before Brianna is able to help her mother figure out how to save him. It’s the nearest that Big Red comes to shuffling off this mortal coil since Culloden, and ever since reading the novel, I’ve always been struck by how something so banal as a misstep while walking in the woods turns into a life-or-death race against time.

Did the Starz series’ adaptation live up to my expectations? Yes… and no. Read on for the highlights of “Monsters and Heroes.”

SUN’S OUT, GUNS OUT | It’s early fall on Fraser’s Ridge. Marsali is almost ready to have her third baby and all is well, Claire tells her during a check-up. The younger woman says she’s glad Claire will be around, “not so much as my physician, but to share it with me, as my ma.” Aw, guys! Also: This is totally not gonna happen!

Over at Casa MacKenzie, Roger goes in for a little morning nookie but is interrupted by a wide-awake Jemmy. I know it’s been said before, but good lord, is that Ed Speelers’ actual offspring? The kid they got to play Jem could not look more like Bonnet if he tried, particularly when he smiles. They’re further interrupted when Jamie arrives, telling Bree that big game have been spotted nearby and he needs her rifle skills for an impromptu hunting outing. Fraser’s discomfiture upon catching his (adult, married) daughter clad in only a blanket while her husband pulls on his breeks is amusing; so is his less-than-pleased look when Bree says she’s promised to help the women dye cloth that day, but Roger can accompany the hunting party. 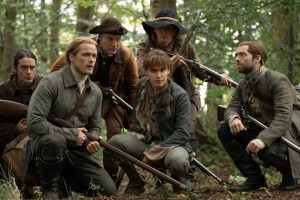 COLD-HEARTED SNAKE | Rog and Jamie join Fergus, Ian, Josiah and a couple other men to track the animals; when Fraser and his son-in-law peel off to drive the beasts toward the other men, they realize that the animals they’ve only glimpsed through the trees actually are a herd of buffalo. Jamie shoots and misses. Then, when he’s reloading his firearm, a viper sinks its fangs into his leg.

The wound is on his inner thigh (oh you little venomous vixen, behave!), and Roger knows he has to bleed the wound and try to suck out the poison in order to give his father-in-law a chance to heal. So he does, and Jamie reacts by being rather shirty to someone who’s literally trying to save his life.

While Roger sets out to try to find the other men, we check in at Dye Day back at the big house. “It’s a good day for dyeing,” Lizzie notes. (Side note: GROAN.) Meanwhile, Bree laments that while her mother’s career path is as necessary in the 1700s as it was in their time, it’s a lot harder for a lass to be an engineer in Ye Olde Times. Claire encourages her daughter to find a way to use her skills, regardless.

JAMIE COUGHS UP A SECRET | Roger can’t find anyone and eventually works his way back to Jamie, who has filleted the snake and is roasting it over a fire. When Rog asks how Fraser is doing, Jamie replies “Well. Well enough.” Unless you were planning on finishing that sentence with “… on my way to that great Gathering in the sky,” Jamie, I think ye may be lying a wee bit, given how gray you look.

Later that night, things are much worse. As the venom works its way through his body, Jamie asks Roger if he knows the last rites (he doesn’t) and commands him to kill Stephen Bonnet if Jamie cannot. Fraser tells his son-in-law about the plan to deal with Bonnet at Wylie’s Landing, but Roger very plainly responds that he doesn’t know if he can kill another man, even the one who raped his wife. Jamie tells him how he saved Bonnet from the gallows and what a huge mistake that was. “Perhaps this is my penance… for my mistakes, you must do this,” Fraser rasps. Plus, he adds, Bonnet could try to claim Jemmy as his own — in order to gain River Run, which has been bequeathed to the boy — by stating that Bree was a willing participant in her assault… and the fact that there was a tavern full of witnesses who’ll say she took part in the act in exchange for a silver ring doesna help matters any. “There’s a fine line between a monster and a hero,” Big Red whispers. This, obviously, rattles Roger a LOT.

Jamie does a bit more puking and rasping about how he was tough on Roger but he’s glad he’s there. Then it’s morning, and Roger slowly drags Jamie through the woods on a makeshift travois. “If I die, Claire must leave. Send her. Make her go,” Jamie says, starting to fade. “It’s not safe here without me. And tell Bree I’m glad of her. Give my swords to the bairn. Tell Claire I meant it…” Then he passes out, and Roger’s panic levels up to Praying Aloud Over My Father-in-Law’s Prone Body.

The following hours are a sweaty, fear-filled rollercoaster for Mr. and Mrs JAMMF. He knows something’s not right because she’s being tender and kind with him instead of yelling at him for getting bitten. She packs his wound with maggots gathered by residents on the ridge and doses him with penicillin broth, all the while cursing Lionel Brown for breaking her glass syringe. And when a feverish Jamie realizes that his wife may have to partially amputate in order to save him, he claws his way out of bed and grabs the saw in order to make his point clear: He WILL NOT live with half a leg and would rather die instead.

Let’s take a moment to dish out props to the Outlander hair and make-up teams. It’s almost as if, given the show’s general distaste for aging Claire and Jamie with prosthetics and the like, the hair/make-up staff threw all of its pent-up creative energy into truly convincing us that Jamie was circling the drain. I do not know what it takes to make Specimen Of Good Health Sam Heughan look like he’s got one foot in the grave, but it cannot be easy.

Anyway, Jamie makes Claire give him her word that she won’t take his leg, and she does. However, she tearfully tells Bree later, she will break her promise if she has to — and Jamie will hate her forever for it. “At least he’ll be alive to be mad at you,” Bree points out.

CLAIRE’S GOT SKILLZ | I’m going to skip the whole “buffalo comes into the yard and nearly tramples Jemmy before Claire kills it” scene, because that green screen was bad. So let’s go upstairs to Claire and Jamie’s bedroom, where Jamie has asked Roger to ferry him. Ian helps them along the way, then reads his uncle the riot act over his desire to be dead rather than an amputee like Ian’s da or Fergus. Ian (correctly) calls him proud and stubborn, and pointed out that he admired Jamie so much, he ran away to Edinburgh to be with him. “I never thought I’d see the day I’d be ashamed of you, Uncle,” Ian says, stalking off. Is Ian part viper? Because OUCH that hurt.

Later that night, Jamie’s eyes pop open and he whispers for Claire, who’s dozing in a chair near the bed. He looks SO BAD, like spoiled-meat bad, and he wants her beside him. “Dinna leave me,” he huffs out weakly. “I could never leave you,” she says, crying. (Side note: Yeah, this exchange got me. When Heughan and Balfe are on fire, they’re on fire.) “Touch me before I sleep,” he asks, trailing off and looking like maybe he’s not going to wake up all that soon. So she whips off her nightgown and presses her body to his, begging him to stay with her. Then, though the camera stays with her where their torsos are pressed together and therefore we dinna see much, she reaches a hand down and… takes his temperature a whole new way? 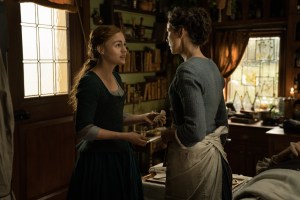 LAST-MINUTE REPRIEVE | Claire’s magical ministrations manage to raise the dead (among other things), because eventually Jamie takes a deep breath and comes back to himself a little. He survives the night, and in the morning tells Claire that he’s now OK with losing part of his leg if he has to. And that’s just what’s about to happen… until Bree runs in with a last-minute save: Roger had grabbed the head of the snake that bit Jamie, and she had the inspiration to fashion a syringe, using the reptile’s fang as a needle.

A highly relieved Claire fills the thing with penicillin and — OH MY GOD JAMIE’S LEG LOOKS LIKE A SMALL ANIMAL’S SKINNED CARCASS — jabs him a couple of times. There are a lot of smiles after. Everyone is putting a lot of faith in this janky invention, but cool?

Now, a word about this scene, if I may: In the book, it happens upstairs in the bedroom, with a bunch of the worried ridge residents gathered around. Jamie puts on a show of being in good cheer and gently teasing Claire about her methods. Then, after everyone but Claire leaves, an exhausted Jamie weeps in relief that he’s probably not going to die. I always liked two things about the scene. One, that it demonstrates how Fraser’s Ridge is coming together as a community with a clear leader, and how the health and well-being of that leader is verra important to everything else that happens there. Second, how it’s only with Claire that Jamie can be his most vulnerable self. I missed both of those things here.

‘YOU NEED ME’ | Anyway, after a brief aside in which Marsali goes into labor and apparently gives birth during a walk with Fergus and their kids — welcome to the world, baby Felicite! — Roger sits with Jamie and good-naturedly gloats about saving his life. Jamie releases his son-in-law from having to kill Bonnet, but Roger says he’s thought about it, and “I want to be there with you when you meet Stephen Bonnet.”

Later, Claire and Jamie talk about the previous touch-and-go evening. He knew he was dying and in his mind approached “a passageway of some kind, and I could go through if I wanted. And I did want to,” he recalls. That’s when he asked her touch him. “I knew you were the one thing that could bring me back.” He decided not to die “because you need me,” he says, not because he loves her — that’ll be true forever, regardless of whether or not they’re living, but he’s got a calling as a war chief, and there’s a battle on the horizon. She says he made a wise choice, and they kiss. Gingerly.