Phyllis Schlafly never held public office, but she left an indelible mark on the American political landscape of the 1970s and 1980s. And in Wednesday’s premiere of Mrs. America — FX on Hulu’s star-studded period drama — we see the start of Schlafly’s rise to become the head opponent of the Equal Rights Amendment in the United States. 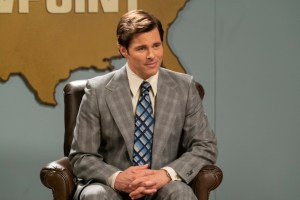 Phyllis (played by Cate Blanchett) is an Illinois housewife and mother of six known for her conservative acumen (she’s written books about fractures in the Republican party) and a failed congressional run. At the opening of the series — FX on Hulu released the first three episodes all at once; this recap will cover the first hour — we meet Phyllis as she’s modeling an American flag bikini during a 1971 political fundraiser for Rep. Phil Crane (Westworld‘s James Marsden). She’s the devoted spouse of Fred Schafly (Mad Men‘s John Slattery); “You’re never just a housewife,” she tells a female friend. “There’s no more important job for a woman.” But she hasn’t quite given up on carving a place for herself in Washington, D.C., and she has to plead with Fred to let her go to the nation’s capital in order to take place in a meeting of influential conservatives.

Once there, Phyllis — the only woman in the room — is relegated to little more than stenographer. And that’s when she pivots from banging the drum about national security to launching a grassroots campaign ensuring that the Equal Rights Amendment never becomes an official part of the United States Constitution. After all, the subject of women’s liberation is hardly dear to her heart: “I’ve never been discriminated against,” she sniffs at one point during an appearance on a talk show. “I think some women like to blame sexism for their failures instead of admitting they didn’t try hard enough.”

Phyllis goes on the offensive, starting by speaking to her local chapter of the Daughters of the American Revolution about the “threat of the women’s liberation movement.” She warns that passage and ratification of the ERA will lead to women being drafted “and the men will be home, nursing the babies!” And she forecasts that if women are “pushed” into the workforce, they’ll wind up burdened by the twin full-time jobs of breadwinner and household nurturer. Her sentiments are met with knowing laughter and nods of approval, and Schlafly’s somewhat false declarations eventually will make their way into the newsletter she sends to subscribers all over the country. 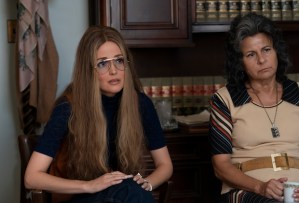 At the end of the hour, Congress passes the ERA, but it must be ratified by a certain number of states before it becomes law. That’s when we check in with the “libbers,” as Phyllis and her ilk disdainfully call them. The women’s liberation movement leaders include The Feminine Mystique author Betty Friedan (Tracey Takes On…‘s Tracey Ullman), Ms. magazine boss Gloria Steinem (Damages‘ Rose Byrne), Congresswoman Bella Abzug (The Americans‘ Margo Martindale), White House aide Jill Ruckelshaus (Wet Hot American Summer) and Congresswoman Shirley Chisholm (Orange Is the New Black‘s Uzo Aduba). The women form the National Women’s Political Caucus and celebrate the ERA’s passage.

When Schlafly’s name comes up during their rejoicing, she’s summarily dismissed as a right-wing nut.

Now it’s your turn. What did you think of the episode? Weigh in via the polls below, then hit the comments!