Warning: The following contains spoilers for Wednesday’s Chicago P.D. season finale. Proceed at your own risk!

Chicago P.D. wrapped up Season 7 on Wednesday night by setting up one of Intelligence’s finest for a very difficult eighth season.

The finale found Atwater forced to go undercover with Doyle, the cop who pointed a gun at his head last season, and unfortunately, the officer hadn’t changed his ways since then. After racially profiling a black man walking on the street, Doyle went after the pedestrian, who was just delivering sneakers to his cousin. But Doyle spotted drugs in the warehouse the man ducked into, so he pulled out his gun and shot first. In the crossfire, Doyle was wounded and eventually succumbed to his injuries.

When it came time to give his account of the incident to Internal Affairs, Atwater was presented with a choice: tell the truth about Doyle having no probable cause to go after the man and face the wrath of Doyle’s third-generation police family, as Voight pointed out, or keep his mouth shut and keep policing, as Ray Price surprisingly advised him. In the end, Atwater chose the truth and found Doyle’s supporters sitting in multiple police cars outside his home.

Below, showrunner Rick Eid previews just how terrible Doyle’s family will make life for Atwater and the Intelligence unit, and talks about what’s ahead for Halstead and Upton, who’s still in New York working with the FBI. Plus, Eid teases the shocking twist that was supposed to close out the original season finale, before the global coronavirus outbreak forced production to shut down.

TVLINE | Coming out of this finale and Atwater’s decision to tell the truth about Doyle’s actions, how bad can things get for Atwater beyond the harassment we see at the end of the episode?
Things could get bad for Atwater. Atwater made a courageous choice to take on Doyle’s friends and family. They’re also very well-connected within Chicago PD and the mayor’s office. In other words, they’re a formidable foe and will present a real challenge for Atwater.

TVLINE | How might Atwater’s choice and the ensuing repercussions from Doyle’s family affect the rest of the Intelligence unit? Will they also be targeted for having Atwater’s back?
There’s a good chance Voight and the rest of Intelligence will get in the crossfire here, but they will always have Atwater’s back — no matter what. Yes, you should be worried. Doyle’s friends and family are taking this very seriously. 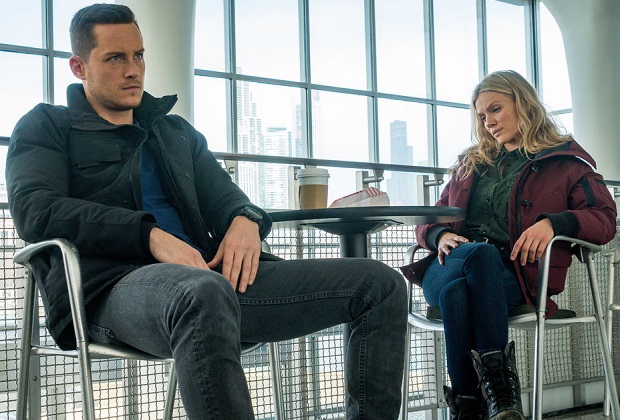 TVLINE | Is there anything you can share about what the original season finale would have looked like, and how much of it will be incorporated into next season?
We had an exciting season finale that will probably get pushed to Episode 4 or 5 of next season. I can’t really talk specifically about the episode, other than to say someone we know is murdered.

TVLINE | Will next season jump ahead in the timeline, rather than picking up directly from this week’s finale?
We will definitely pick up Season 8 in real time.

P.D. fans, what did you think of the season ender? Grade it below, then hit the comments!