As we lurch ever closer to the uncertainty of whether The Voice will be able to stage any kind of live episodes in Season 18, the pretaped Knockouts kicked off Monday. And did they ever pack a punch! At least one sing-off — Team Kelly’s CammWess and Megan Danielle’s — was so impressive, it made me rethink my stance on how easy the coach’s decisions are. It also led to the strangest tangent ever about what it’s like when Blake Shelton blows out his Spanx. (It resembles a half-open can of biscuits, it turns out.) How was the rest of the night? Read on; as always, we’ll discuss. 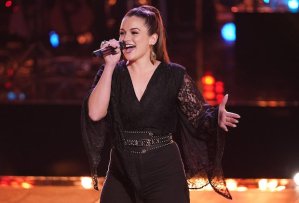 Team Blake: Joei Fulco singing “When Will I Be Loved?” (Grade: B+) defeated Levi Watkins singing “I Ain’t Living Long Like This” (Grade: A-) | In rehearsal with Mega Mentor James Taylor, Joei said possibly the most honest thing we’d hear all night: “My dad will be so jealous.” Not that Taylor isn’t a legend and a half, I just doubted that she or Levi would know him from Grandpa Munster. Hilariously, Levi clarified that, although he was singing Waylon Jennings’ outlaw party-every-night song, he was neither an outlaw nor out partying every night. Adorable. And he had what his coach called “a deep bottom end” that seemed destined to serve him well on stage. In the moment of truth, he sang like a freakin’ pistol that had just been shot. I hate to sound like the coaches, playing their broken record of “OMG! And he’s only 14!” but s—, he is. And he performs like someone 10 times his age. This was more fun than anything Jake Hoot did in Season 17 — and he won. When it was Joei’s turn, she was splendid, letting rip a voice as rich and pliable as warm caramel. Despite that, I would’ve gone — and thought “Mr. Blake” had to go — with Levi, an anomaly in Season 18 and a contestant less likely to get lost in the shuffle. Guess he proved me wrong. Damn. 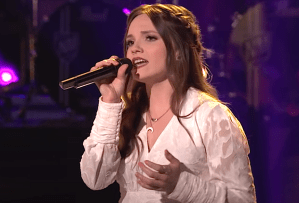 Team Kelly: Megan Danielle singing “Piece by Piece” (Grade: A-) defeated CammWess singing “Say Something” (Grade: A) — CammWess stolen back by John | No sooner had Megan arrived at rehearsal than she “Oprah’d” her coach by saying she’d chosen her song because, yeah, she related to it. CammWess made Kelly cry next by suggesting that A Great Big World’s hit could apply to faith. Yeah, Kelly was a one-woman waterworks Monday. When Megan and CammWess hit the stage, ho. Ly. Crap. Maybe I’m just hyperemotional from being home for weeks, but these two killed me as much as they had their coach. After making a bigger impression in the Battles than he had in the Blinds, CammWess delivered a Knockout that really lived up to the name. It was super intimate, super vulnerable, and those runs — he did with the sounds coming out of his mouth the same thing a ribbon dancer does with ribbons. I got actual chills. Then Megan got up there and sang her heart out with a mercilessness that made you just want to hug her. Plus, the combination of precision and rawness that she packs into each performance is just nothing short of magical. I know I often say, “Oh, who are the coaches kidding pretending it’s hard to pick a winner?” But Lord, this one was hard to pick. I’d probably have given the edge to CammWess, who seemed a scintilla more present and connected on stage. Kelly, after saying that she’d made her decision strategically, went with Megan, then let Nick duke it out with CammWess’ former coach John over which of them was going to steal him. 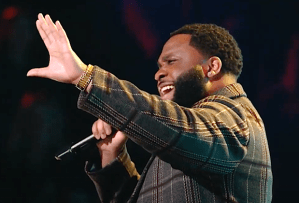 Team Legend: Mike Jerel singing “Versace On the Floor” (Grade: B-) defeated Darious Lyles singing “Me and Mrs. Jones” (Grade: B+) | Good as Darious is, I kinda thought this Knockout was Mike’s to lose; he’s not just in another league, it’s like he’s from another planet. In rehearsal, John discouraged Darious from letting his big notes trail off (which it didn’t seem like he should need to do, anyway — his voice is big enough to stay big, right?). But Mike actually sounded iffier during his run-through; John and James both heard pitch issues. Under the spotlight, Darious offered up the equivalent of a turndown service, using his own velvety voice as the silk sheets. He was, in a word, terrific. Yet I still somehow felt like I was expecting more — maybe a key change? There was nothing, and I mean nothing, wrong with what he did. It was just sorta like a firework that you expect to explode more brilliantly than it does; it was still pretty and enjoyable, just not as exciting as you anticipated. Up next, Mike seemed to have gotten his pitch issues mostly under control — mostly. Nick heard him sounding at points uncomfortable. But his performance didn’t quite come together. All the parts were there, they just needed to sit on the burner a little longer, maybe? I’d have gone with Darious, even though I wanted more from his number. 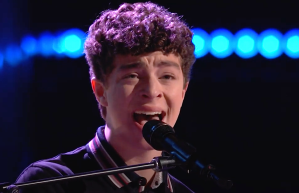 Team Nick: Roderick Chambers singing “Redbone” (Grade: B) defeated Tate Brusa singing “The Scientist” (Grade: D) | I might’ve assumed that Nick would lean toward Mini Me Tate, were it not for the fact that Roderick had so distinguished himself in the Battles. I wasn’t sure about his choice of Childish Gambino’s hit for himself, though; it was sounding a little dicey in rehearsal. Tate struggled, too, however. At times, it sounded like he couldn’t find a note if it was written on a Post-It. When it counted, Roderick reminded us why he isn’t to be underestimated. I still wasn’t sure that the song was the right pick for him, but he totally brought it. The broad-shouldered contestant looked like a refrigerator singing sweet nothings at us — and, more often than not, it worked. Next to take the mic, Tate started off with enough pitch problems to get him sent back to baseball camp. The kid’s talented for sure, but this was painful. Even on the big notes that generally allow him to cut loose, he didn’t manage to sell it. So this was an easy decision — for me, anyway: I would’ve gone with Roderick. 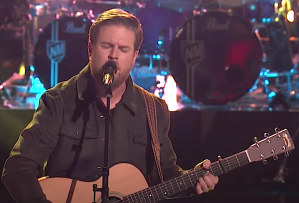 Team Blake: Todd Tilghman singing “Anymore” (Grade: C+) defeated Cam Spinks singing “Rumor” (Grade: D) | Prior to this Knockout, I imagined that I’d enjoy Todd’s performance more than Cam’s, and Blake would gravitate toward Cam regardless since he’s country through and through. But Blake was hearing greater range from Cam in rehearsal than he ever had before. So maybe he would surprise me. The big challenge for Todd seemed like it was going to be figuring out the best way to harness his energy on stage; to that end, James helped him rearrange his Travis Tritt cover a bit. First up, hmm… Todd held my interest as much as a piece of day-old toast does. He was fine, but fine wasn’t gonna cut it. Only when the song really let him cut loose and unleash his voice, a cross between a foghorn and Joe Cocker, did he come alive. Didn’t think that was gonna be enough. In the No. 2 position, oh crap. Cam sounded so off, I turned down the volume on my TV in hopes of helping him out. “That was fun,” John lied before nailing Cam on pitch problems. Kelly suggested that he hadn’t given himself enough room to spread out on “Rumor.” On the flipside, Todd, in his coach’s estimation, was “literally an animal that feeds off of energy.” So they had better pick him some more energetic songs!

Team Legend: Zan Fiskum singing “The Story” (Grade: B-) defeated Joanna Serenko singing “Angel From Montgomery” (Grade: A-) — Joanna stolen by Blake | This Knockout actually seemed like it might be a toughie — the contestants were too evenly matched. Even when Joanna started her John Prine/Bonnie Raitt cover with the line “I am an old woman,” I couldn’t help but believe her. Her voice is so pure, every note rings true. When Zan tried out her Brandi Carlisle number, she was so predictably excellent that it dawned on me, “Oh, duh — two powerhouses, last Knockout of the night, we must be getting a Steal!” Singing first, Joanna was nothing short of mesmerizing. She had my heart doing the same happy dance that her coach was doing in his seat. Yeah, she struggled a little on the bigger notes — she was more comfortable singing a little more softly, cool as the morning dew — but overall, stunning. Rounding out the night, Zan was good but less vocally confident than I’d come to expect. I actually thought the band did her a favor when they came in and kinda overpowered a line that sounded thisclose to going off the rails. Don’t get me wrong — for the most part, she was good. Really good. I just thought that she’d be better. (Am I asking too much?) Thankfully, Blake and Joanna’s former coach Nick both hit their Steal buttons to keep Joanna around.

So, which of the Knockouts really wowed you? Any of them Spanx-bustingly good? Vote for your favorite below, then hit the comments. Anybody got a bright idea about how we could go live while social-distancing?