Kumail Nanjiani‘s high-profile physical transformation for Marvel’s forthcoming The Eternals has been the talk of pretty much every town except one: Silicon Valley. And now we (sorta) know why.

In a live Instagram Q&A with his trainer Grant Roberts (aka the architect of his new physique) on Monday, Nanjiani revealed that he gave producers of the HBO comedy a heads-up about his new swole body before production began on the show’s sixth and final season last year. Oddly enough, The Powers That Be chose not to incorporate his extreme makeover into Dinesh’s storyline, even as the once scrawny character’s biceps became — as TVLine noted back in November after Episode 3 aired — unmistakably massive. 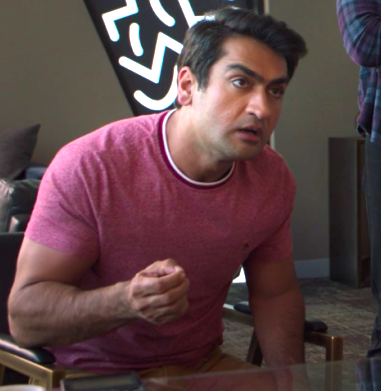 “I told them, ‘I’m gonna look pretty different,'” Nanjiani revealed. “In fact, in the first few episodes they put [Dinesh] in small t-shirts, and I was like, ‘Guys, I look very different’ — even though I wasn’t done [with the metamorphosis]. The way I look at the first episode [of the season] and the last episode are quite different. [But] it was fun to see when the [season] started airing… a lot of [viewers] were like, ‘Why does [Dinesh] look like that? What is going on?'”

Had Silicon producers decided to address Dinesh’s new obsession with fitness in the series’ final season (which concluded in December), it would not have been that much of a stretch, Nanjiani pointed out. “It does make sense for Dinesh to be a guy who decides to work out a lot,” maintained the actor. “He is that kind of guy.”