Killing Eve is back… and the killing isn’t slowing down anytime soon.

Sunday’s Season 3 premiere — read our full recap here — ended with a still-wary Eve reluctantly agreeing to meet her old MI6 pal Kenny for drinks… but when she went to meet Kenny at the offices of his investigative website The Bitter Pill, she found him dead in the parking lot after an apparent fall. (Kenny, it should be noted, was sniffing around some leads about The Twelve at the time of his demise.) It’s a big blow to Eve, and to us fans, since Kenny was such a favorite — and it wasn’t easy for the writers, either. 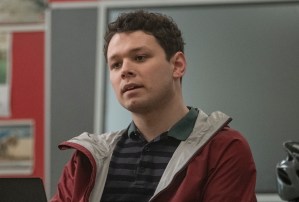 “It’s so tough when a beloved character dies, and I really don’t want people to think it was a coldhearted decision,” new head writer Suzanne Heathcote tells TVLine. “We mourn the character, too… Kenny is a fantastic character, he’s beloved, and Sean [Delaney] is a fantastic actor.”

But as sad as it might be, Kenny’s death does motivate Eve to get back on the investigative trail, which opens up a lot of storytelling avenues for Season 3. “We knew that after everything that had happened [in Season 2], to bring Eve back in, it had to be something monumental,” Heathcote explains. “It couldn’t just be professional. It had to be a personal reason. So the fact that his death means so much is because he’s so beloved.”

Obviously, his death also has a huge impact on his mother Carolyn, who’s still at MI6 in a reduced role, and it will help to bridge the gap between Eve and Carolyn. “It has a huge impact on both of them,” Heathcote hints. “It had to be something of that size to get that engine going.”

Killing Eve fans, will you miss Kenny? And what are your predictions for the rest of Season 3? Grade the premiere in our poll, and hit the comments below to share your thoughts.