Killing Eve‘s Villanelle might’ve thought she actually succeeded in killing Eve… but rumors of her death have been greatly exaggerated, it seems.

When the BBC America thriller returns (early!) for Season 3 this Sunday at 9/8c, it picks up six months after last season’s finale cliffhanger, which saw a heartbroken Villanelle shoot Eve in the back at an abandoned Roman ruin. She left Eve for dead as the finale cut to black… but as we can plainly see from the trailers, Eve is alive and well in Season 3. All jokes aside — “She’s a really bad shot!” laughs executive producer Sally Woodward Gentle — we know that Villanelle is a highly skilled killer who understands how to finish the job. Even star Jodie Comer, who plays Villanelle, admits she was confused at first: “I was like, ‘She has to have shot her to kill her.’ That’s the only thing that made sense in my brain.” So how is Eve still alive, exactly? 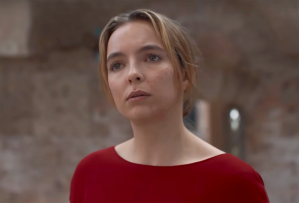 “We discussed that a lot, actually,” new head writer Suzanne Heathcote tells TVLine. “It was a conundrum. We had to sort of sit there and figure it out for a while.” She and the Season 3 writing staff eventually worked out a solution that “maintained Villanelle’s brilliance, and yet allowed us to keep Eve alive, which was essential.” (After all, what is Killing Eve without Eve?)

“With Eve, I felt that she would’ve bled out,” she explains. “It was sort of an act of God, almost. It was a miracle, really. The only way to maintain Villanelle’s integrity and have Eve survive was that Villanelle left her, she would’ve bled out, it was a matter of minutes, and she was discovered by tourists. It was touch-and-go, and she just managed to survive.”

As for why Villanelle pulled the trigger in the first place, “I think she lost control of that relationship, and for Villanelle, control is everything,” Heathcote notes. “That’s why she committed that act of violence… She didn’t want Eve dead, but at the same time, she couldn’t have Eve leave her.” 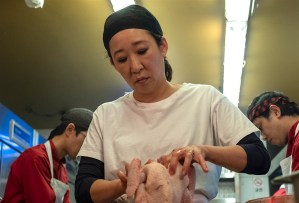 Eve did leave her, though, and MI6, too, after that nasty rift with Carolyn; as Season 3 opens, we find Eve living alone (sans her estranged husband Niko) and working as a line cook in the back of an Asian restaurant. “I don’t think you’d expect her to just pick up where she left off. She’s got no job, so she’s looking for how to survive,” Woodward Gentle teases. Eve begins Season 3 telling herself “‘I’m quite happy working in this restaurant and minding my own business,'” she adds. “But of course, she’s deluding herself.”

She’s also processing a great deal of trauma this season, Heathcote hints. “Eve has really seen the destruction of not only her life, but the lives of those around her, and has removed herself from the world, almost to protect the world as much as herself. I think there’s a genuine fear of the person she’s capable of being.”

Stay tuned to TVLine for more Killing Eve coverage, including a chat with Comer about Villanelle’s Season 3 journey and a thorough breakdown of Sunday’s season premiere.