We’d love to say we’re not crying, you’re crying, but c’mon, let’s be real — we’re all crying over the ways that the joyful series finale of Schitt’s Creek lived up to its “Happy Ending” title. And since we’d sooner watch a Sunrise Bay reboot that doesn’t star one Moira Rose than say goodbye to the sweet-hearted Pop comedy, we’re going to take one last look back at the finale.

Included in the “wedding album” below are what we consider to be the 10 most perfect moments from the show’s (sniffle) last episode, ranked in order of Schitt-iness. Among the standout scenes are the ones in which Patrick gave David a better stress reliever than he’d ever intended to, Alexis inadvertently made it appear that she was marrying her brother, Moira made the Pope seem like a dowdy dresser, and the Jazzagals paid homage to one of the series’ most romantic interludes.

Schitt's Creek: The 10 Best Moments From the Series' Finale 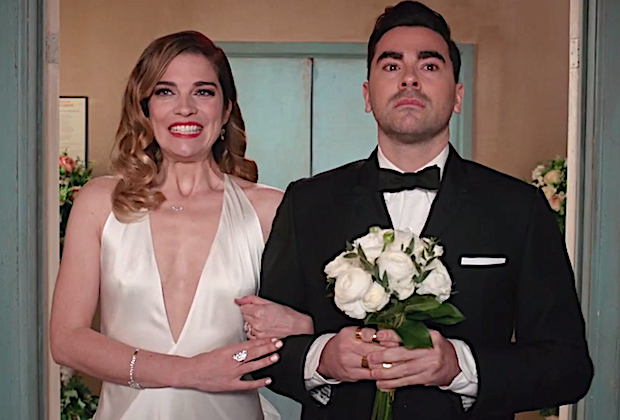 Yes, yes, of course, we also included in our countdown the reveal of the eye-popping going-away present that Roland had arranged for Johnny and Moira to see as they left town. Frankly, we didn’t think he had it in him to pull off a gesture like this, that was as sublime as it was silly. The latter, sure, but the former? Not on your life. Well played, Mayor Schitt. Well played.

To check out the complete list — and to see which bit we ranked No. 1 — fold in the cheese and… Oops. Meant to type click on the gallery to the right (or go here for direct access), then hit the comments with your favorite Schitt’s memories.