Little Fires Everywhere‘s Mia has an inscrutable face and a don’t-mess-with-me vibe, which makes her compelling, intriguing… and really freaking difficult to access, even for one of the women tasked with playing her.

“I don’t know other people’s point of view, but I think it’s hard to, a lot of times, empathize with older Mia,” says Tiffany Boone, who portrays Kerry Washington’s character as a younger woman in the Hulu drama. “She’s really hard, right? And it’s hard to break through to her. You know there’s a reason why she’s like this, but you can’t tell why.”

A bunch of questions relating to Mia’s guarded nature will be answered in Wednesday’s episode, which heavily features Boone and focuses on Pearl’s mom as a young adult. Boone and Washington hadn’t worked together prior to the series, but the younger actress said she was excited — and more than a little intimidated — to work with the Scandal star.

To prepare for the role, Boone chatted with Washington on the phone and spent a day shadowing her on set. Mia’s backstory “is what makes you really, really empathize with her,” Boone says. “For me, it was a lot of pressure to make you feel why she’s the person [she is] today, and the choices she’s made.” Adding to the enormity of the task: The hour-long installment encompasses multiple decades. “So many things happened,” Boone says, laughing. “I mean, I had like 30-plus costume changes in that one episode!”

Little Fires Everywhere is Boone’s second recent prestige-drama role; she also plays badass Nazi hunter Roxy Jones in Amazon’s Hunters, which is now streaming. During a recent chat, TVLine got The Following alum to talk about playing two highly devoted moms (though she’s not one in real life), walking like Washington, shouting at Al Pacino and taking part in one of the most disgusting scenes in recent TV history.

Keep going for Boone’s thoughts on:

NAILING MIA’S WALK | “Kerry’s physicality is really important to her acting, and she as a person has very interesting mannerisms. For each character, it obviously changes a little bit. For me, the way into understanding the choices and intentions and all of that was her physicality. Like, there was a very specific walk she created for Mia. I entered in through the physicality, and then from there was able to break it down.” 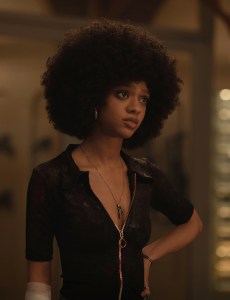 HOW ROXY FITS IN WITH THE REST OF THE HUNTERS | “Once you watch the whole thing, you see she’s one of only technically two of the hunters that really doesn’t have a personal connection to the Holocaust. So it’s strange to just have this former Black Panther, single mom being out here, killing Nazis… At the beginning, for her, it’s about providing for her daughter. And then, because she is an activist at the end of the day, she is fighting for freedom for all people… And she slowly realizes that she has to fight for all people in order to make a better world for her daughter. [Laughs] At first, it looks a little like, ‘Why is this girl with this Afro, these bell-bottoms, this shirt zipped all the way down to her belly button, why is she out here, trying to kill Nazis?’ And then it becomes clear, once you get to know her.” 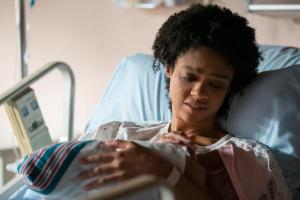 THE SIMILARITIES BETWEEN MIA AND ROXY | “Hunters is the first time I played a mother, and then I went straight into playing Mia… Growing up and having a single mom, and seeing the sacrifices that she had to make, I have so much respect for mothers in general. Both of these characters do whatever it takes to protect their child and make a better life for their child. They put their lives on the line.”

PLAYING OPPOSITE PACINO | “I already loved [Hunters] before I knew he was attached… The first scene where I actually interact with him, I’m yelling at him. After the first take, I was like — I think I said it to Louis [Ozawa], who plays Joe — I was like, ‘I just shouted at Al. Do you think I was too loud? Do you think he’s upset?’ At first, it’s really intimidating! But once you get to know Al, as an actor, he wants to be challenged… And also, he’s just the sweetest person ever.

THAT SCENE IN HUNTERS’ EPISODE 5 | [A brief and gross editorial note: While Pacino’s Meyer Offerman is trying to get a suspected Nazi to talk, he tortures her by making her eat dung. Roxy is a witness.] “First of all, the manure is hummus and food coloring and something else. But I mean, as many times as you tell yourself, ‘It’s hummus,’ it doesn’t matter: It’s still disgusting… [Pacino] improvised a lot of that scene. He would keep going five minutes after the last word was written on the page… He was trying to push Barbara [Sukowa, the actress playing the Nazi] to spit on him… [If I and co-star Josh Radnor] look confused, like ‘What the hell is happening?,’ we were not acting… [Laughs] As crazy as it seemed to you guys, it was, like, 10 times crazier in the moment.”