Manifest brought Season 2 in for a landing on Monday night, and judging by the very final scene alone, the 828ers will face some big, wet questions in the event that NBC renews the supernatural-tinged family drama.

When last we tuned in, Cal had been kidnapped by Jace, Pete and Kory, the meth dealers who had escaped their prison transport and quickly sought revenge against arresting officer Michaela. Short of killing Cal, they offered to trade the lad for their confiscated meth stash — which Mick managed to remove the evidence locker, with help from Jared. 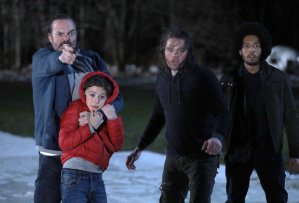 The first meet-up to make the trade was foiled by a New Yorker who really takes the “See Something, Say Something” placards to heart. But thanks to Zeke’s latest calling plus a clue texted over by Cal, Team Stone was able to ascertain where the baddies were holed up. Arriving at the location in the woods, Mick and Ben marched off toward the remote cabin, leaving an ailing Zeke in the car. Inside the cabin, Pete showed a soft spot for Cal, and ultimately freed the kid to sneak out the back door, infuriating Jace. A chase followed, out onto a frozen lake outside. There, the meth dealers and Cal came face to face with Michaela. But before a trade could be made, a lightning bolt zagged down from the sky, triggering a crack in the ice that snaked toward the meth dealers, eventually weakening the ice below them and Cal until all four plunged into the frigid drink! 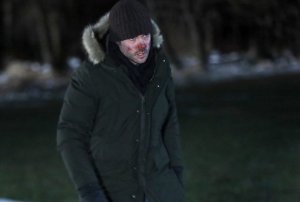 Just then, Zeke arrived on the scene, and despite being 95-percent Popsicle at this stage, he dove into the hole to save Cal. After Zeke found and lifted Cal out, Jace got a hand on Zeke’s ankle, pulling him down. Zeke managed to shake loose and get himself pulled to safety by Ben… only to finally perish immediately after, in Mick’s arms. Death Date would take a holiday, however, as Zeke briefly glowed and then thawed out, healthy as ever!

Meanwhile in the city, Saanvi aimed to coerce the Major into revealing what cure, if any, she has come up with that might save Zeke, by infecting her with anaphylaxis and dangling a vial of life-saving adrenaline before her. But in the struggle that followed, the vial got swatted away, shattering on the ground. Poor Saanvi was left to watch the Major die, but not before she learned that her adversary aimed not to cure but weaponize the 828ers’ anomaly.

As the finale drew to a close the morning after, Jared at the frozen lake was told by divers that no bodies — none — were found beneath the ice. Meanwhile, Ben’s new calling, about an exploding Flight 828, took on a wild new meaning, when a fishing boat off Cuba dredged from the sea a tail fin… from Montego Airlines’ Flight 828!

You’ve got questions, and TVLine sought out answers, from Manifest showrunner Jeff Rake.

TVLINE | I guess it was probably almost exactly two years ago that you were shooting your pilot. How long have you been wanting to dredge that tail fin out of the water?
For a long time. [Laughs] It’s something we’ve been very excited about, and I’m so impressed with how that sequence came out. I co-wrote that scene with my colleague Matt Lau, and it was an easy enough scene to write, but it was incredibly challenging to film, so kudos to director Romeo Tirone and our entire crew. It was literally the last scene we shot of Season 2, and as beautiful as it looks, I’m sorry to report that cast and crew were not out on the beautiful waters that it appears to be. We were out on the freezing water somewhere just south of Coney Island.

TVLINE | One of the things I’m wondering — as I imagine we are supposed to be — is how could the plane have physically been in two places at once?
That’s exactly right, because if materials testing proves that that is, in fact, the “identical” tail fin, it’s a metaphysical impossibility. We saw that plane land in New York. We saw that plane blow up on the tarmac at the end of the pilot. So how can a plane have landed and been exploded and then also be found at the bottom of the ocean? Once the entire world finds out about this tail fin, that’s going to re-trigger the global scrutiny and paranoia about Flight 828 and its passengers. More pointedly, it’s going to lead people — and not just hatemongers like the Xers, but even rational minds — to conclude, in light of this evidence— 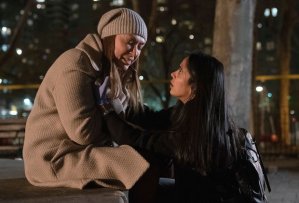 TVLINE | Do you want to confirm if The Major is truly and sincerely dead? I think there’s more storytelling weight to it if she is, in fact, dead, because then Saanvi really has something to process.
That’s right. That’s right. The Major is, in fact, dead, and that has opened a horrific can of worms for Saanvi. She obviously went [to the park] with the awareness that that worst-case scenario could happen, and at the same time I think it’s quite clear in that very compelling scene — incredibly acted by Parveen [Kaur] and Elizabeth Marvel — that it certainly was not Saanvi’s intention.

TVLINE | My heart broke when that vial shattered.
Oh my goodness. It’s heartbreaking. Saanvi is somebody who is incredibly smart and capable and confident, so what that is going to do for her in Season 3 is plant for her what I would say is a two-pronged story arc. On the one hand, there’s the real-world stakes of she has committed a homicide — whether it’s manslaughter is for the lawyers to decide. But she has taken a life, and no one knows except for Vance.

I don’t want to spell out the details of who finds out about this first, how this becomes an investigation, but suffice it to say, this is going to become quite serious, and it begs all sorts of questions. Is Vance willing to try to cover this up for Saanvi? Is he able to? Are any of the investigators, any of the cops that we know and love, going to be roped into this? Without revealing any of those details, I will say that there will be a cat-and-mouse investigation that plays out as sort a Javert/Jean Valjean scenario — or as others might say, Kevin Costner in No Way Out, where somebody’s trying to figure out who a killer is, and a picture is slowly printing out of the printer. Metaphorically speaking. 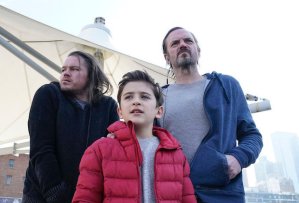 TVLINE | Josh Dallas indicated to me that, in the event of a Season 3 pick-up, the three shadow guys would still loom large.
I would say that our audience could fairly deduce from the end of the Season 2 finale that it’s not the last that we’ve seen of these meth guys. In the writers’ room, we fondly refer to them as The Meth Heads, and should they return, the audience can anticipate a dynamic parallel to that of Griffin, who at the end of Season 1 led us to discover that it’s not just the passengers who are experiencing this. We learned that with Zeke, and we learned that with Griffin, and so these three guys may, in fact, be the next individuals who are experiencing the notion of “death and return,” and that is going to set up its own incredibly high stakes. Again, a two-pronged journey — both the real-world one, because there’s unfinished business between those guys and the Stone family, but also on the mythological side of the equation.

What does it bear should we see them die and return, as we have seen with Zeke, as we have seen with Griffin? What does that mean for the greater mythological journey for our passengers? We’re going to learn the answer to that in the middle of Season 3, and that’s going to reshape our mythology for the rest of the series. That’s going to be probably the most significant mythological card turn in all of the series. 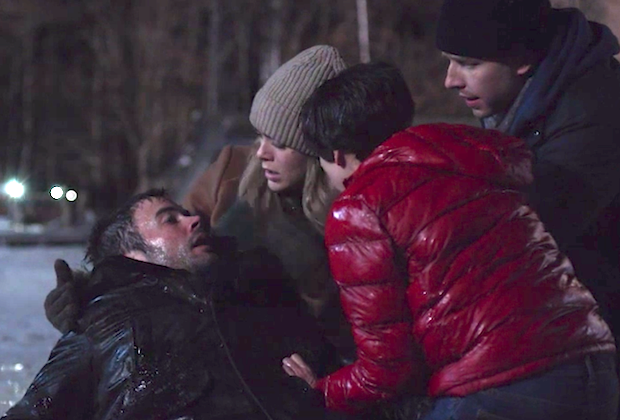 TVLINE | Speaking of Zeke, is it safe to say that the ultimate cure for him was “the friends we made along the way”?
Yeah, it’s a beautiful thing. [Laughs] Ben deduces, sitting there in the garage with Michaela at the end of the finale, that Zeke followed the callings and survived the Death Date. Ben’s going to go into Season 3 with that takeaway because it’s really great news, it’s optimistic news, and it’s news that he urgently wants to share with every last passenger, because, let’s remember, there are 150-plus passengers who have yet to cross our television screen. By the time we get to the middle of Season 3, for reasons that have to do with these meth guys, Ben is going to learn, to his chagrin, that [getting the word out] is complicated. It’s more complicated than he thought.

TVLINE | Why aren’t all the passengers on a big group text by now?
I might be answering a question that you didn’t have on your page, but I’m going to answer it anyway. One thing we’re going to come to discover in Season 3, as we get to know more and more passengers, is that not every last passenger has that same kind of benevolent, selfless makeup of the Stone family and Saanvi. There’s a whole mixed bag out there.

TVLINE | I guess that answers my next question, which was whether we will meet any new characters in Season 3.
We absolutely will. And we’re going to meet one in particular who is going to become one of the more important characters in our series. I imagine us looking back in later seasons and trying to remember when that character entered, because they’ll have become so integral to our storytelling. 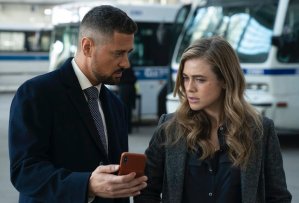 TVLINE | Lastly, what do you want to say about what the Michaela/Zeke/Jared dynamic will look like moving forward? You could argue that Jared was only stepping aside because it was the right thing to do at the time, and he privately figured that this marriage had an expiration date. But Zeke is now healthy and may even brush his hair now.
[Laughs] That’s awesome. Hundred percent to all of that. Michaela did an excellent job of compartmentalizing her feelings for Jared, but the question is how long can those feelings stay compartmentalized as the triangle evolves. The ultimate question there is: Can Michaela carve out a place for both of these men in her life? And that’s what we’re going to see going forward.