NBC’s Manifest is heading for a (quickie) wedding, now that terminal Zeke has popped the question to Michaela. But will the most harrowing calling yet — and/or the ominous shadow figures — RSVP for this otherwise happy day? Josh Dallas spoke with TVLine about the supernatural thriller’s final Season 2 episodes, airing March 30 and April 6 (Mondays at 10/9c).

TVLINE | I’m looking at these pictures of Ben stringing up festive lights for Michaela’s wedding in this week’s episode. Will the Stone family enjoy a bit of a breather here?
The wedding is a good thing. It’s a bit of light within the darkness. Ben is conflicted by Michaela’s decision to get married, but he understands that she loves Zeke and this is the request of a dying man and she wants to make him happy. I do think it gives everybody something to focus on, because it has meaning, and meaning helps us tolerate all the things everyone is going through. 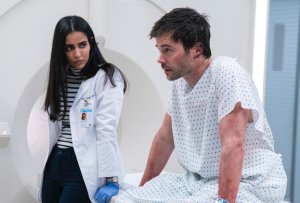 TVLINE | But if I’m Zeke, have I bought my last green bananas? Dude is looking pretty rough these days.
It’s possible. It’s not looking good, he’s looking extremely ill, as the frostbite overtakes him. Whatever ends up happening with Zeke and his destiny, it’s extremely important the lessons that we learn from it.

TVLINE | Should we worry about any new callings dampening the wedding-day mood?
Of, of course! [Laughs] There are some callings in this episode that push us toward the end of the season, and they are significant.

TVLINE | Last week we put faces to the ominous shadow figures, who [showrunner] Jeff [Rake] described as “three of the most important characters of the season.” Safe to say these guys aren’t your run-of-the-mill meth dealers?
Absolutely. They’re going to prove to be extremely important to the Stones’ story going forward — through the end of this season and, with any luck, into Season 3. 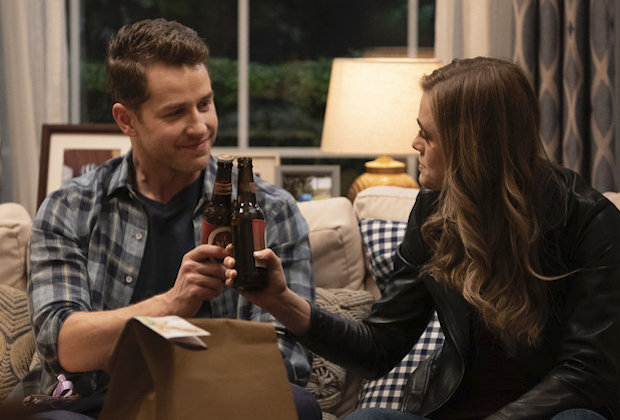 TVLINE | I’m also hearing that the bond between Ben and Michaela will be tested like never before.
The relationship between Michaela and Ben is tested in a huge way, in terms of how they always have each other’s back. They are pushed to an extreme. A scary extreme.

TVLINE | What have you enjoyed most about Season 2?
I’ve enjoyed the callings pushing us to hopefully an answer or to a “door opening” to the mystery of what happened to [the 828ers]. I like how it has pushed them to this idea of that this has possibly happened before.

TVLINE | That one calling with the storm was wild. As soon as Olive pointed out that it was in fact not raining outside, I was like what??
Right? What’s most exciting for me in Season 2 is it has pushed the mythology of the show into a different area, where if we’re lucky enough to go into Season 3, we can really start to hang onto something and delve into the exhilarating part of the larger mystery. And hopefully find some answers. I also like how we saw Ben realize that the callings are leading them somewhere.

TVLINE | Right, even he had to wonder if they are being trained to serve some sort of “end of the world” scenario.
Exactly. As he sees the calling save Grace’s life, and save his baby’s life, he realizes that he’s got to have a change in the way he thinks about these things, and that’s been a great journey for him.

TVLINE | The Major has been off the chess board since early in the season. Will we see her again?
Ohhhh, just wait. Just wait to see what happens with the Major in the season finale! Like a bad penny, she’s going to turn up.

TVLINE | What else do you want to tease about the finale? What kind of final sequence do we get?
The end of the finale is just going to be, ‘Holy s–t. Where is it going now?” [Laughs]

TVLINE | Does it point to what Season 3 would be about, or recontextualize everything we thought we knew so far?
It’s going to do both. It’s going to point to where we’re going to go in Season 3; it’s going to tie up a certain idea about these callings and how we use them; and I think it’s also going to ask more questions. Which is what we want! If we had all the answers and they had happy days every day, why would we watch?? [Laughs] But yeah, the end of the season is jaw-dropping.