With network shows wrapping early and endless streaming options at our disposal, the communal viewing experience is becoming a rarity. Enter the TVLine Binge Club, a new opportunity for everyone to get back on the same page — or at least the same channel — to reflect on classic shows that once brought us all together.

Those braces. That hair. That poncho. Betty Suarez is more than just the role that made America Ferrera a household name. She’s also an icon in her own right, a bushy browed inspiration for anyone who has ever dared to succeed in a world designed to keep them down. And with the 10th anniversary of Ugly Betty‘s series finale right around the corner, I thought it would be the perfect pick for TVLine’s inaugural Binge Club meeting.

The ABC dramedy is just as funny and affecting as ever, and those soapy twists still pack a potent punch. But in revisiting the series, especially its Golden Globe Award-winning first season, I couldn’t help but marvel at the late creator Silvio Horto’s decision to sidestep any potential romance between Betty and her boss, New York media playboy Daniel Meade. It’s especially surprising when you compare Ugly Betty to its international source material; in the original Colombian version, many of Betty’s actions are motivated by her overt infatuation with her boss.

On that note, let’s get this Binge Club meeting started by breaking down the five episodes I asked you to watch. (It’s OK if you didn’t. I won’t tell anyone.) We’re going to focus on Betty and Daniel’s ever-shifting dynamic, from their rocky first meeting to their ambiguous final moment. 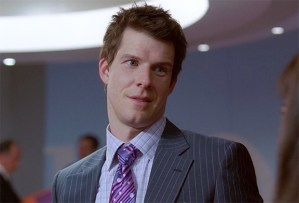 1. ‘PILOT’ (S1, E1) | The look of smug dissatisfaction you see pictured here is Daniel’s candid reaction to learning that Betty is his new assistant. In an effort to get Daniel to stop sleeping with his employees, his father found someone “fugly” (not my word!) to ward off temptation. What’s more, Daniel spends the majority of the pilot trying to get Betty to quit. At his worst, he forces her to squeeze into a tiny latex outfit and pose next to stick-thin models for an embarrassing photo shoot. It isn’t until he sees the humiliation in her eyes that he realizes she’s human. Honestly, he’s a total dick.

After realizing the error of his ways — and totally blowing a major account for the magazine — Daniel drops by Betty’s house with a heartfelt apology about how he’s still learning how to be a real person. She serves him a big slice of humble pie in return, which then inspires an account-saving idea for Mode. (Daniel apologizing and Betty saving the day are easily two of the show’s strongest recurring themes.) At this point, anyone wishing for a Betty-Daniel romance is just cruel.

Other observations from the pilot:

* Looking at the long list of men Betty romances throughout the series — including Henry from accounting, Gio the sandwich guy and millionaire Matt — Walter has got to be the absolute worst. (No offense.)

* It’s still so funny to me that the mysterious masked woman turns out to be Rebecca Romijn. The way Alexis is introduced, with her smoky voice and vague accent, you’d expect Katy Keene‘s Gloria Grandbilt to be under those bandages.

* Between Ugly Betty and The Devil Wears Prada, was KT Tunstall’s “Suddenly I See” ever declared the official anthem of aspiring magazine workers? 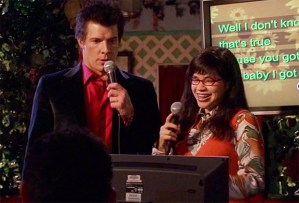 2. ‘IN OR OUT’ (S1, E13) | Following a disastrous romance with editor Sofia Reyes (Selma Hayek), who only pretended to love him for an article she was writing, Daniel is in full-blown spiral mode. Meanwhile, Betty is now working as a “chip girl” at a Mexican restaurant after quitting her recently acquired gig at Sofia’s magazine. Despite no longer being his assistant, Betty can’t help but check in on him — which is good, because he’s in dire need of a friend. And a more convincing spray tan.

After returning to Mode as Daniel’s assistant, Betty joins him for an “all-night date” (Hilda’s words!) that includes crashing a wedding reception, a karaoke duet of “I Got You Babe” and a moonlit stroll across the Brooklyn Bridge that ends with him telling her, “You’re better than any model, Betty. Much better.” Twitter was less than a year old when this episode aired, but I’m sure there were hoards of frustrated tweets about how badly these two needed to kiss. A lesser show might have had them do just that. But Betty knew better.

Other observations from ‘In or Out’:

* The scene where Hilda breaks down and admits that her life hasn’t turned out the way she expected is heartbreaking. Can we take a moment to appreciate Ana Ortiz? 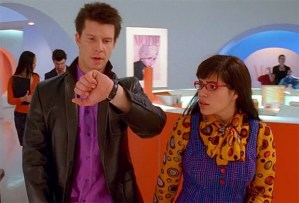 3. ‘PUNCH OUT’ (S1, E19) | Six episodes later, Daniel is back on another bender, this time inspired by an avalanche of family drama. Not only has Alexis booted him from the company, but their mother has just confessed to murdering Fey Sommers. Naturally, Betty takes it upon herself to keep Daniel from completely falling apart.

In true Betty fashion, she inadvertently crosses a line, prompting Daniel to expel these ugly (yet somehow still handsome) words: “We’re not at the office! I don’t need a chaperone or a bodyguard or a babysitter. When we leave that building, your day is over, do you understand? Please, for God’s sake, just let me live my life. Punch out!” For the record, he would actually benefit from having all three of those things — plus a good therapist. Betty and Daniel have always been a little too involved in each other’s lives, at least in terms of what Human Resources might suggest, but this is the first time it presents a real problem for them.

Other observations from ‘Punch Out’:

* Octavia Spencer’s arc is — and I don’t use this term lightly — a hoot. Her dangerous obsession with Ignacio feels like a pre-cursor to Ma (which is now available to stream on HBO Go. You’re welcome.)

* One of my favorite rediscoveries from this binge was the enduring friendship between Betty and Christina. When Betty realized that her platonic work wife helped Wilhelmina screw over Daniel… I felt that betrayal. 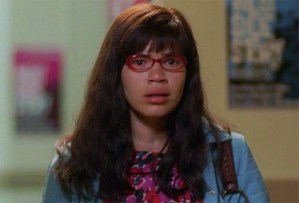 4. ‘EAST SIDE STORY’ (S1, E23) | OK, I have a confession to make: I didn’t exactly pick this episode because of its high Betty-Daniel content. In fact, Betty’s entire storyline in the season finale revolves around her first date with Henry, which gets derailed when Betty learns that his ex-girlfriend Charlie is allegedly pregnant with his child. I picked this episode because it’s one of the show’s very best, and if you rewatched it for Binge Club, I’m sure you don’t regret that decision.

Not only was this a satisfying culmination of everything that happened thus far, but it really represents the best of Ugly Betty. It’s the perfect marriage of over-the-top soap opera twists (Amanda is Fey Sommers’ daughter! Someone cut Alexis’ brakes! Christina has a secret husband!) and unexpected emotional gut-punches. Seriously, if Santos’ death — set to Justin singing “Somewhere” from West Side Story — doesn’t reduce you to a puddle of emotions, you’re deader on the inside than Wilhelmina.

Other observations from ‘East Side Story’:

* Seeing Kristin Chenoweth on this show makes me miss Pushing Daisies all over again. ABC used to be so bright and colorful.

* Between this show, Glee and Great News, I feel like Jayma Mays is always fighting to keep her man.

* While we’re talking about Henry, remember the big “reveal” in Season 2 that Christopher Gorham was hot? ABC treated his first shirtless scene like a major event, making it the focus of that week’s promo. (Stop the presses! There’s a body under that sweater vest!) 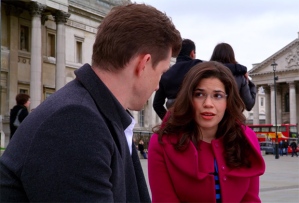 5. ‘HELLO GOODBYE’ (S4, E20) | Jumping forward just a bit, the series’ final episode chronicles Betty’s last days in NYC before she begins a new job in London. Claire takes the opportunity to tell Betty that she believes Daniel has always had feelings for her, a notion she refuses to even consider before dismissing it entirely. After bailing on Betty’s going-away party to avoid having to say goodbye, Daniel surprises her in London, where he also decides to start fresh.

“I think I’m gonna stay around here for a while, see what I can find,” Daniel says. “Maybe take you to dinner tonight, if you’re free?” Betty accepts his offer, then counters with one of her own: “If you want something to do, I am looking for a new assistant!” It’s classic Betty-Daniel banter, playful and flirty… but just shy of romantic. (Sorry, Claire!)

Despite the rushed energy of this finale, most of the characters’ storylines are decently wrapped up — except for Daniel’s. While everyone else generally finds what they’ve been searching for, he jets off to London with no real plan. There’s something to be said for the magnetic effect that Betty and Daniel have on one another, but at this stage of the game, you have to wonder: Is it really love? Or does Daniel merely depend on Betty for structure and direction? And if that’s the case, is good-natured Betty inadvertently enabling his dependency? One thing’s for sure: I’ve spent way too much of my quarantine thinking about this.

Other observations from ‘Hello Goodbye’:

* Production on Ugly Betty relocated from Los Angeles to New York for its final two seasons, and it made a big different for those exterior shots in Queens. Some of the green screen work in Seasons 1 and 2 was straight-up baffling.

* I love that Justin has a boyfriend at the end of the show. (Ditto for Marc. That one’s even more surprising, somehow.)

* Why do I find this final shot so funny?

CLOSING THOUGHTS | On paper, Betty and Daniel make perfect sense as a couple, and the undeniable chemistry between Ferrera and Eric Mabius only makes that harder to deny. But I’m actually glad that they never got together. I like that they spent four seasons bettering one another — albeit accidentally, in Daniel’s case — without requiring a romantic motivation for their actions. Given the wink-wink nature of that final scene, a part of me will always wonder what the couple’s official courtship would look like, but I can’t shake the feeling that their on-screen union would have proven to be the show’s undoing.

OK, fellow bingers, let’s talk: Where do you stand on the possibility of a Betty-Daniel romance? Cast your vote below, then drop a comment and let us know why (or why not). I’ll be hanging out in the comment section to reply to any new questions.