The fight about whether or not the Equal Rights Amendment should be added to the United States Constitution has been roiling since 1923 — and whether that statement intrigues or bores you is a good indicator of whether or not you’ll enjoy Mrs. America (debuting Wednesday, April 15).

FX on Hulu’s latest prestige drama covers the late-1970s fight over ratification of the ERA, which passed in both the Senate and the House of Representatives in 1972 but which needed at least 38 states to sign on in order to become law. Among other things, the amendment states that “Equality of rights under the law shall not be denied or abridged by the United States or by any state on account of sex.” (Spoiler alert: It still isn’t an official part of the Constitution.)

The nine-episode limited series (I’ve seen four episodes) chronicles the culture clash that the ERA stirred up in Nixon-era America. On the pro-ERA side: the women’s liberation movement, led by second-wave feminists like Betty Friedan and Gloria Steinem. On the anti-ERA side: the grassroots efforts of conservative homemakers, fronted by an Illinois housewife and author named Phyllis Schlafly.

Cate Blanchett (Elizabeth) plays the conservative Schlafly to frosty perfection, nailing everything from her speech cadence to her not-a-hair-outta-place blonde beehive. Schlafly is the centerpiece of the show but she decidedly is not its hero; Mrs. America takes great pains to point out how deceptive Schlafly was in her messaging, how willing she was to overlook racist language and behavior when it popped up among her flock. And then there’s the irony: Mrs. America makes a point of showing how Schlafly only pivoted to fighting the ERA from the homefront when it became clear that men wouldn’t take her seriously as a mainstream political contender. If only she’d been treated equally and afforded the same rights, eh?

Blanchett shines throughout, but her scenes opposite Phyllis’ husband Fred (Mad Men‘s John Slattery) are some of the best. In Episode 4, for example, as Fred preps his wife for an important debate, he is able to take her from cool rationality to the verge of tears with just a few pointed queries. The exchange is brief but savage: Blanchett and Slattery are playing at the top of their game. 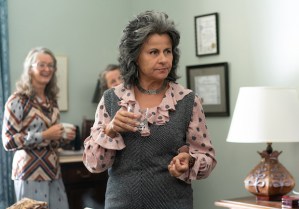 The all-star cast also includes standouts like Rose Byrne (Damages) as the media-savvy Steinem, Tracey Ullman as second-wave pioneer Friedan and Uzo Aduba (Orange Is the New Black) as Democratic Senator/presidential hopeful Shirley Chisholm. Ullman, in particular, is captivating: As the Feminine Mystique author struggles to maintain relevance among her younger compatriots, Ullman’s Friedan is equal parts desperation and bravado, lamenting Steinem’s youth and beauty one moment and skewering Schlafly’s right-wing propaganda the next. 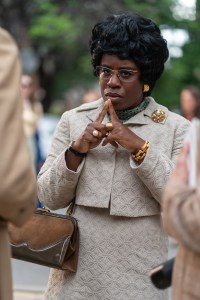 But is even the most A-list of casts enough to keep the average viewer engaged in what amounts to nine hours of political inside baseball? The women’s studies minor in me wants to raise a fist and chant “Hell yes! ERA now!” The TV journalist in me isn’t so sure. I’m thinking specifically about Episode 3, which centers on the 1972 Democratic National Convention: If the audience doesn’t have a healthy grasp on how the delegate system works, the conflict in the episode — which concerns Chisholm’s tenuous grip on candidacy and whether or not abortion rights should be a plank in the party’s platform — likely won’t carry the dramatic weight it should.

That said, Mrs. America‘s very existence serves as a reflecting pool for many of the political and cultural debates that continue to this day. A right-wing instigator who doesn’t mind muddling the truth in order to achieve political goals? A fractious left-wing movement losing sight of the prize by becoming mired in in-fighting and cults of personality? In this election year, the FX drama just might serve as a cautionary tale.

THE TVLINE BOTTOM LINE: Top-notch performances from an A-list cast are Mrs. America‘s greatest selling points, but make sure to bone up on the American political process ahead of time — or you might be lost.