Masked Singer host Nick Cannon shocked — shocked! I say — the judges of the Fox reality show Wednesday when he announced that that night’s Super Nine double episode would be his last.

Cannon’s tomfoolery was the theme of the two-hour event: Wahlberg pretended not to have shaved her armpits, Cannon tried to trick everyone into thinking his friend was guest judge Snoop Dogg, White Tiger tried to pass off what he did on stage as “singing.” Y’know, the classics.

Read on for the highlights of all of the Super Nine performances.

TURTLE | The shelled soloist turned in a very good rendition of Steve Winwood’s “Higher Love” — who else here is in love with that Whitney Houston remix? — and offered some new clues. He works out with a 40-lb. pack to prepare for wearing the costume (“That’s a quarter of my body weight”), and he is not a trained dancer. Also: A comic book called The Amazing Adventures of Shellboy with a price of $10.13. (My guess: Former Summerland star Jesse McCartney) 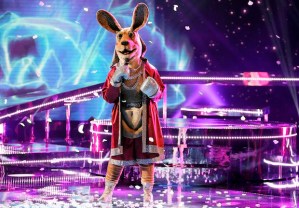 KANGAROO | I won’t pretend to have any idea what Kangaroo’s big clue — a blow-up kangaroo that she pulled outta her pouch, I think? — means. But I will point out that her performance of Dixie Chicks’ “Not Ready to Make Nice” was breathy and a little listless. C’mon, woman, summon your inner Natalie Maines! (My guess: Life of Kylie‘s Jordyn Woods)

WHITE TIGER | He came. He flossed. He didn’t even try to carry a tune as he performed Right Said Fred’s “I’m Too Sexy.” Ladies and gentlemen, I give you… (My guess: Former New England Patriot Rob “Gronk” Gronkowski)

KITTY | It takes some big, furry ones to take on Celine Dion’s “It’s All Coming Back to Me Now,” but that’s just what the fancy feline did, and she did it pretty well! Her clues included: “Christmas is truly the most wonderful time of the year,” with the Tree costume from Season 2 showing up alongside her; and a shout-out to Robert Redford, who “helped me get my very first role.” (My guess: Victorious star Victoria Justice) 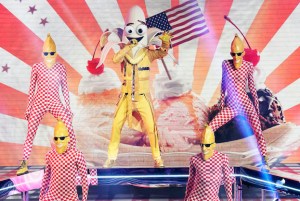 BANANA | Has Banana taken voice lessons during his off-weeks? Because his version of Lynard Skynard’s “Sweet Home Alabama” was objectively good. Stronger than we’ve heard him before, and with enough swagger that he really landed the dismount. (That “Banana!” with the rockstar hand? Baller.) While dropping clues, Big Yellow basically said he wasn’t a stand-up comedian, which makes me really start to think that he’s… (My guess: Poison frontman Bret Michaels)

FROG | Frog could win the whole season, and it would be well-deserved: Dude knows how to entertain. He perfectly executed Kriss Kross’ “Jump,” including the miggida-miggida-miggida-mac-daddy part, which I can’t imagine was easy while heaving for breath inside a giant, foam rubber prison. His big clue? A suit of armor. (My guess: CSI: Cyber‘s Shad “Bow Wow” Moss) 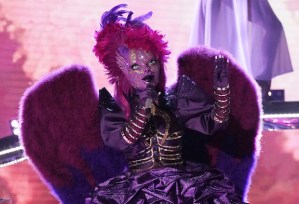 NIGHT ANGEL | “I’m not just a voice. I’m a mogul,” the scary looking but beautifully voiced contender told us during her clue section. Which is awesome, but I don’t know that I would have chosen Andra Day’s “Rise Up” for this week’s selection: Night Angel’s chest voice is so rich, her head voice — which was called upon a lot in this tune — comes across as a little thin in comparison. (My guess: Real Housewives of Atlanta‘s Kandi Burruss)

RHINO | Rhino downplayed the judges’ panel’s belief that he’s an athlete, because “music has been my passion since I was a child.” He added that he’s been on the Billboard charts and has an album. Also? “I’m not nearly as tall as you think I am.” His very ambitious choice of song, “What a Man Gotta Do” by the Jonas Brothers, was a little shaky at the start but blossomed into something pretty great. Way to stretch your boundaries, Rhino! (My guess: Former Major League Baseball player Barry Zito) 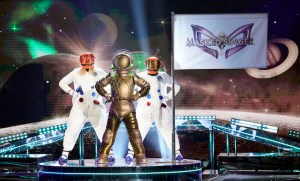 ASTRONAUT | Moon Man’s falsetto held up nicely as he performed “Never Gonna Give You Up” by Rick Astley, which was a great vehicle for his smooth voice and burgeoning dance style. Also, he apparently has broken a world record at some point in his life, which plays directly into… (My guess: Singer/songwriter Hunter Hayes)

THE BOTTOM THREE | White Tiger, Banana and Rhino were on the chopping block at the end of the episode.

THE UNMASKING | White Tiger was chosen to go home. When he was unmasked, he was revealed to be Gronkowski.