Stumptown‘s Season 1 finale resolved the mystery surrounding the death of Benjamin “Benny” Blackbird — but that wasn’t always the ending that the writers had in mind.

In an interview with TVLine, series co-creator Jason Richman admits that they briefly considered an alternate outcome, one which “resurrected” Sue Lynn’s son and revealed that he somehow faked his own death 13 years ago.

“[That idea] did come up in the writers room,” Richman says. “The audience [has] seen enough TV, and there are a lot of [writers] who would have made that choice.”

So what stopped him?

“The thing that troubled me about that was, in a lot of ways, it would discount and invalidate a lot of the trauma that Dex had been through,” he explains. “What is that ultimately going to say [about] the person who really suffered, who felt that she was in some way responsible for this man’s death, if he shows up in the end? I would hate him so much [and] there would be no way to redeem that character if he turned out to be some sort of evil specter… That felt like a very cheap [idea].” 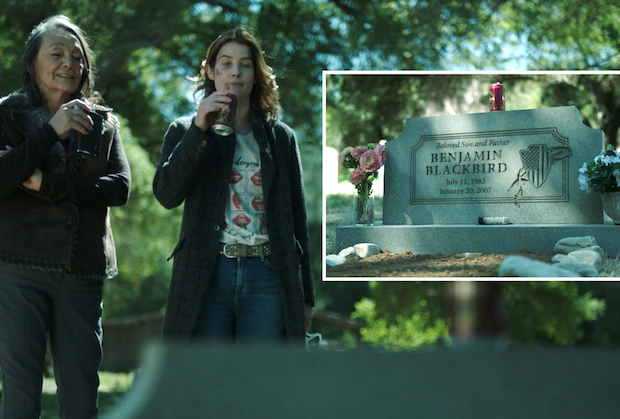 Despite the Benny storyline being put to bed, Richman maintains that Benny’s mom, Sue Lynn, will continue to be a part of the show in a potential Season 2.

“What I think is so interesting about [Tantoo Cardinal’s] character is that she doesn’t really exist on TV,” he says. “She’s not someone who we’ve necessarily seen before. Sue Lynn is a powerbroker in this town; that was always the M.O. of that character — someone who had a very difficult past with the tribes in the Northwest, and wanted to play with the big boys. She wanted to be like [hotel and casino mogul] Steve Wynn, and so she opened this casino… [Going forward], we will find her always trying, in a very flawed sort of way, to advance the plight of her people. We’ll find her all over the place in this show, and plugged into all different kinds of worlds.”

Do you agree that bringing Benny back from the dead would have been a mistake? And what are your hopes for a potential Season 2?