Warning: This post contains a major spoiler from Sunday’s Outlander.

Outlander viewers who are familiar with the novels on which the series is based have known for a while: Murtagh Fitzgibbons Fraser was living on borrowed time. 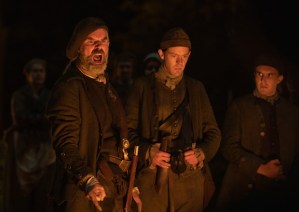 Jamie’s godfather/right-hand man died on the Culloden battlefield in Diana Gabaldon’s third novel, Voyager. And in Starz’s adaptation of the books, poor Murtagh met his end in this week’s episode during the Battle of Alamance in North Carolina. (Read a full recap.)

Given the current state of the real world, TVLine jokes with Duncan Lacroix during a chat earlier in the week, the timing is not optimal.

“I know, I know,” he says, chuckling ruefully over the phone from where he’s waiting out the coronavirus quarantine in Glasgow, Scotland. “I was thinking that. This is not the cheering-up that we need at this time!”

Read on for Lacroix’s thoughts on his reticent character’s extended life on the TV series and the on-set moment with co-star Caitriona Balfe that nearly broke Dead Murtagh’s steely resolve. 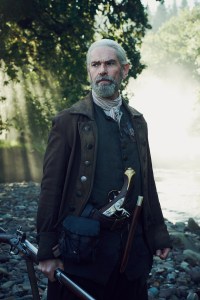 TVLINE | Book readers have known this was coming, but how far ahead did you find out that it would happen this season?
Just shortly before we started shooting season five it was explained yeah, that this was going to be it for the old kid. [Laughs]

TVLINE | Had you wondered about the way that they might take him out? Did you figure that he would go down in a battle like he does in the book?
That’s exactly the way I’d wanted it, form way back. This is really is the way I pictured it. It’s kind of what happened in the books, but it’s just being transposed 25 years later. It’s the same lines that he said to Jamie in Culloden in the books. It was just postponed long enough for the silver fox to make an appearance. [Laughs]

TVLINE | I know you’re friends with both Sam Heugh and Caitriona Balfe. Both of their characters have moments with Murtagh after he passes away. Talk to me about playing dead while your friends are weeping over your body.
Obviously, I’ve just got to stop breathing and stay as still as possible. Oftentimes, the more you concentrate on that, it all goes wrong. So it’s just like you kind of like zone out of the whole scene. But you’re kind of aware that the performance going on around you. There was a point — it’s when Caitriona took my hand and put it on my chest, just the way she was playing it, touching my corpse, as it were, and that kind of got to me a bit, yeah. It was emotional.

Then we got to film it twice, actually. Because the one you see is like a pickup shot of me, so luckily enough it was the very last thing I ever shot was me laying there on the table. Fitting enough.

TVLINE | Was it harder to get through the post-death scenes with Caitriona or Sam, would you say?
Well, when you’re there, you just got to let them, I mean, it’s their scene at that point. We shot that scene at the tree twice, as well, but the first time we shot it yeah, I got really emotional that day for some reason. I didn’t expect to… It was just that scene, saying goodbye to this guy that I’ve inhabited for six years. It all kind of came crushing down on me between takes. Sam did such an amazing job in those scenes and in the triage tent.

TVLINE | Let’s pivot and talk a bit about last week’s episode. Your scenes with Maria Doyle Kennedy were great. I kept thinking about how we’ve talked about how Murtagh has a lot going on inside, but much of it doesn’t bubble to the surface — and here he was saying things like, “I love you. Please wait for me. I made a mistake.” Seems like a huge step for him.
Well, yeah. That was just such a magical scene as we were shooting it, and Maria is just so amazing in it. She’s such a talented actress… It was such a well-written scene but also we’re very good at the non-verbal communication, myself and Maria. There’s a lot that we’re able to play out on our faces and gestures. You know, it was great to give it that richness and depth. So yeah, I just chewed that scene up, I loved it. [Laughs]