The Masked Singer this week tried a little Wednesday-night cross-promotion, having Lego Masters host Will Arnett sit in on the panel (his show follows Masked at 9/8c) and depicting a bunch of clues via little Lego people. This led to judge Nicole Scherzinger protesting that her bedazzled Lego Minifigure didn’t look anything like her. And that led to judge Ken Jeong singing, “Don’t cha wish your Lego were hot like me” to the tune of The Pussycat Dolls song, and that’s pretty much all you need to know about anything outside of this week’s performances.

On to this week’s performances! 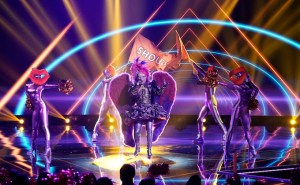 NIGHT ANGEL | The magenta mama owned the crowd with her rousing performance of the Isley Brothers’ “Shout,” particularly when she hit some glass-shattering notes in her high register. Her entire clue package was about how much she missed out on in life — like senior prom — since starting her career as a kid. This is the week that the performers’ friends offer testimonials: Night Angel’s pal let us know that “Our graduation conflicted with a huge career opportunity for her.” Also, in another clue, the scary cherub said judge Jenny McCarthy had often said her name on her show. (My guess: Real Housewives of Atlanta star/songwriter Kandi Burruss) 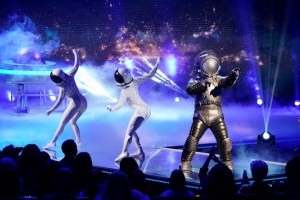 ASTRONAUT | The moon man once fell flat on his face “in front of thousands of people,” his friend told us; in the video, he sat near a mug of coffee, dice that total 10 (two fives) and a bridge. When it comes time for Astronaut to perform Ed Sheeran’s “Shape of You,” he seemed short of breath and a little unsure — though maybe he was just afraid to go down those steps during the number — though he made up for it with some strong freestyling over the melody near the end. “Remember when we were both together to celebrate a huge birthday,” he told judge Nicole Scherzinger. (My guess: country singer/songwriter Hunter Hayes)

T-REX | I feel like every time T-Rex has taken the stage, I’ve said something along the lines of “Peppy but pitchy.” And that’s exactly what happened here when she sang A.R. Rahman & The Pussycat Dolls’ “Jai Ho! (You Are My Destiny).” Her coach weighed in with some clues, including “She subscribes to the idea that there is no off day” and “Even though she’s young, she’s got fans of all ages.” (My guess: YouTube star JoJo Siwa)

RHINO | I was highly impressed with Rhino’s stripped-down rendition of Smokey Robinson’s “Tracks of My Tears,” and I was even more impressed when my internet sleuthing — based on some of tonight’s clues, which included the state of Missouri with a crown on top — led me to a new guess. I’m very excited to share it with you. You ready? (My guess: Former major league baseball pitcher Barry Zito)

THE UNMASKING | T-Rex was revealed to be Siwa.