During stressful times like, you know, the one we’re all in, I find myself especially grateful for the comfort food that’s dished out every week by The Voice. From the coaches’ playful bickering to the earnestness of the contestants to the occasionally really-excellent performances, I devour it and then come around looking for seconds. (Can ya tell I’m really eager for Tuesday episodes to resume?) Hell, I even like grumbling about how Carson Daly always informs us, “The Battle starts now.” Yeah, dude, we noticed.

Speaking of the Battles — probably my favorite round, owing to the weirdness of two singers being teamed up to both sound good together and try to outdo one another — Season 18’s kicked off Monday evening. Which was both exciting and nerve-wracking, since the coaches have been known to make the occasional boneheaded decision. As you may have read, I already had my favorites, and I’m sure you did, too. So the question was, would we lose any of our standouts after a dozen contestants went mic to mic on Night 1? Read on, and we’ll discuss. First up, we had… 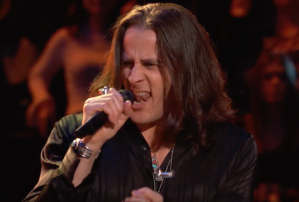 Team Blake: Joei Fulco (Grade: B) defeated Todd Michael Hall (Grade: B-) on “The Best” — Todd saved by Blake| Joined in the rehearsal room by Season 16’s Comeback Stage coach Bebe Rexha, Blake was especially impressed by the high notes that 50-year-old rock god Todd could hit. I was less dazzled by anything I heard than concerned that he and Cher soundalike Joei were gelling about as well as me and drinking in moderation. Luckily, by the time the spotlight fell on them, they’d improved a good bit. They still sounded better individually than together — and were in no danger of making me forget Noah Reid’s Schitt’s Creek version of “The Best” — but this wasn’t the train wreck that I feared it might be. As the coaches said over and over, it was fun, if awfully karaoke-ish at the same time. Todd is clearly a pro and possesses the sort of range that singers perform voodoo rituals to steal; still, I agreed with Blake’s decision to give the win to Joei. Between her raspy growl and that sure-I-could-light-the-night-sky smile, she could be a contender. Hilariously, Kelly misunderstood the new rules that stated that coaches had to steal before a contestant hit the stairs (or some such). As a result, Blake got to save Todd, who would later on compete with the three other saved artists for a single spot during the Knockouts. 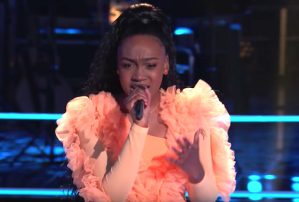 Team Kelly: Anaya Cheyenne (Grade: B+) defeated Chelle (Grade: C) on “Scared to Be Lonely” | Ahead of her first Battle of Season 18, Kelly stunned her contestants by bringing in to help them with their Dua Lipa cover… Dua Lipa herself. (Fun fact: It wasn’t until last season’s finale that I learned Dua Lipa was not a brand of lip-plumping gloss.) After she encouraged the girls to fill gaps with artful “oohs” and “aahs” and Kelly advised them to take care to fill their voices with the ache for which the song called, it was showtime. “Don’t think, just do” was Anaya’s goal. (Hearing her anew, I couldn’t believe I left her off my Best of The Blinds countdown.) In the moment of truth, Chelle poured her bag of tricks all over the stage: She demonstrated a vocal depth, a vibrato, a rasp… you name it, she went for it (except yodeling). However, as Blake pointed out, “There were parts of your performance that got away from you.” Anaya, on the other hand, had only to do her thing, and her thing was more than strong enough to carry her to the Knockouts. As Kelly said, “She’s just a perfect, coachable artist.” And the star quality she gives off is so strong, you almost see it like neon radiating from her. 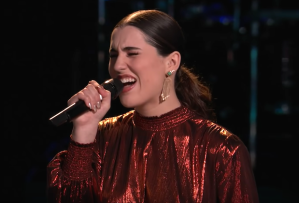 Team Nick: Roderick Chambers (Grade: A) defeated Joanna Serenko (Grade: A-) on “when the party’s over” — Joanna stolen by John | After Nick joked about how pleased he was to meet his Battle advisors, “two of the most unintelligent people I could find” — brothers Joe and Kevin Jonas (ha!) — he suggested adding a harmony to the first chorus of his teammates’ Billie Eilish cover. While they got busy working on that, I got busy trying to remember who Roderick was from the Blinds; that I had forgotten who he was didn’t seem to bode well for him. When they hit the stage, Joanna was, as expected, dazzling; in fact, when she sang in her lower register, I would’ve sworn my ears were getting a massage from the inside out. And she looked so much like a star, she could’ve been Sophie Ellis Bextor’s kid sister. But then Roderick joined in and I was, as Kelly put it, like, “Wait, what?” He was terrific: polished, controlled, smooth — so much so that Blake said that he would’ve chosen him as the winner just for the “shock factor” of how good the one-chair-turn was. I actually think Roderick might’ve been a hair better than Joanna here, but I still would’ve given the victory to her. In addition to a killer voice, she just has “it.” Anyway, this was a gorgeous, epic Battle. As Blake suggested afterwards, “You guys were probably more in sync than anybody we’ve heard so far.” 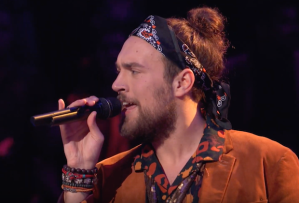 Team Legend: Mike Jerel (Grade: B) defeated Zach Day (Grade: B-) on “Adorn” | While the duo was in rehearsal with advisor Ella Mai, I tried not to focus on how much Zach reminded me of a cross between Weird Al and Aquaman. John instead focused on how both of his singers lacked the sexy swagger that the Miguel number they’d been assigned required. Ella added that if the guys went for a run without committing to it, they were unlikely to reach the finish line without tripping. I assumed this Battle was Mike’s to lose; he just needed to find some of the confidence that he’d brought to the Blinds. When the fellas took their place on stage, Zach did demonstrate that he has game. Super quirky game, but game nonetheless. And vocally, he was good; he has one of those rubberband voices that he can pull in all directions. Mike was hands down the superior singer, though. There was just a strength, a sureness to his delivery, and a surplus of chemistry, that made this no contest. For me, at least. John said that it was close, and Mike had only won because he possessed “a tone that I enjoy listening to… slightly more.” 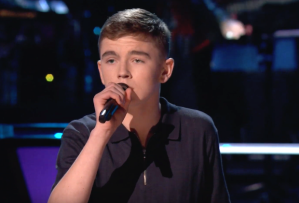 Team “Mr.” Blake: Levi Watkins (Grade: B) defeated Jamal Corrie (Grade: D+) on “Counting Stars” | Cranking the cute to 11, Jamal shared in rehearsal that before the Blinds, he’d asked if any of the other contestants wanted to just, you know, sing with him; Levi had said yes, and after they warmed up with “Perfect,” Jamal had predicted that if they advanced, they’d be paired on stage. And there they were! Bebe and Blake liked that Jamal wasn’t afraid to go for any ol’ big note that he heard in his head — but he had to try not to sound quite so hoarse while he did so. Meanwhile, with his voice changing, 14-year-old Levi had some trouble finding the right key (but by the end of practice, he seemed to have — he and Jamal sounded kinda kickass together). Under the spotlight, however, Levi outshone Jamal from the start. They both had great energy, and Jamal certainly has greater range, but Levi more often sounded solid — and never sounded like his pal did, like he was at risk of getting a hernia reaching for notes. Jamal did swing at the biggies, but as John noted, there was a lot of imprecision. Blake suspected that some of that was due to all the running around on stage that he did. Who knew cardio classes would be as important as vocal lessons before competing on The Voice?

Team Nick: Allegra Miles (Grade: A) defeated Michael Williams (Grade: A-) on “How Will I Know?” — Michael saved by Nick | To help Michael get over his nerves, the Jonas Brothers led him in a little scream therapy. When Michael and Allegra began practicing the Sam Smith version of the Whitney Houston classic, I wasn’t entirely sure that the screaming was over; I’d swear at one point I heard the same sound that I make when I realize I’m out of chips. Still, they had promise — Allegra had been a standout in the Blinds, and as practice went on, Michael pulled out a pretty promising falsetto. Once the Battle got underway, his falsetto kept the promise it had made. Allegra’s voice was immediately more interesting to me, though; pretty as his was, there was a richness, an earthiness to hers that left me hanging from every note. Kelly called it “a finale tone.” This was actually a pretty stunning Battle — the way Allegra and Michael’s ad libs and runs criss-crossed each other’s was like hearing the equivalent of shooting stars. Good call on Nick’s part, saving Michael — the superstar’s fan base who likes cute guys with a great falsetto are gonna love Michael.

So, what did you think of Night 1 of the Battles? Vote for the contestant you thought shone the brightest below, then hit the comments.