Things I loved about this week’s Outlander: Murtagh’s reappearance, complete with a declaration of love for Jocasta on the night before she’s supposed to marry another man.

Things I didn’t love about this week’s Outlander: pretty much everything else.

It hurts to admit it, given how much I cherish Diana Gabaldon’s books and, for the most part, Starz’s adaptation of them. Sunday’s episode should be a highlight of the season, a chance to gather all the players in one place for intrigue, plot-forwarding and sexy funtimes. Instead, we get Bree and Roger with bugs, and a blown-out-of-proportion, highly ridiculous Jamie-Claire argument topped off by the only sex scene in this show’s entire run that has made me cringe in embarrassment for the actors.

I’m no book purist, but some of the decisions made in this script really don’t make sense to me. Let’s go through them together, aye? Read on for a review of what happens in “Better to Marry Than Burn.” 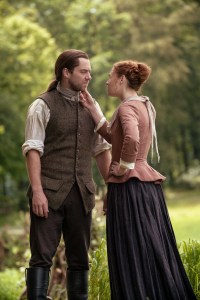 WHAT ARE YOU SMOKING? | I’ll get the silliest diversion from the novel out of the way up front. Instead of attending Jocasta’s wedding to Duncan Innes, Brianna and Roger stay at Fraser’s Ridge while her parents travel to River Run. Per Bree, it’s because Roger’s still mad that Jocasta tested him by dangling her estate as enticement for Rog to treat Jem like his own son (given that, because of Brianna’s rape, there’s a question about his paternity). So the MacKenzies are in charge when locusts start descending upon the ridge, threatening to ruin everyone’s crops in one loudly-buzzing swoop.

Bree and Roger’s neighbors demand to know what his plan is; Roger, of course, has none, and everyone grumbles that they want Jamie to come home and deal with the impending pest invasion. But Mr. and Mrs. Fraser are 10 days’ ride away at River Run, so that’s not an option. Eventually Roger remembers a story his father told him, about how smoke drives away locusts. So he comes up with a plan that’s held together with goose fat and poo. Literally — that’s what they fill the smudgepots with. And, along with some small fires set along the crops’ perimeters and some fervent flapping of sheets by the ridge folk, Roger, Bree and the rest create a blanket of smoke that staves off the worst-CGI’d swarm North Carolina has ever seen. 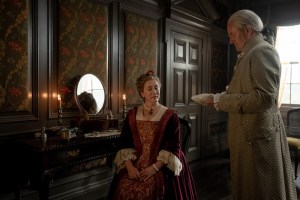 WEDDING WOES | Let’s head to River Run, where Jocasta is one day away from marrying Duncan, but she’s not verra excited about it. (Side note/question for you Oldlanders out there, but I’ll spoiler-tag it so no one gets mad: Do we think Jocasta and [Spoiler] are stealthily knocking boots in this version of the story like they do in the books? We’ve gotten no indication of it, but I wonder…) Jamie and Gerald Forbes witness her signing over the estate to Jeremiah, though she’ll serve as its guardian until the boy is of age.

Outside, Jamie grouses to Claire that Murtagh should be the one getting ready to wed Jocasta. Claire points out that it’s Murtagh’s choice not to be there, then they make their way over to the dance floor set up in the middle of the lawn. Lord John Grey is there, as is Governor Tryon and his wife. The Tryons are relocating to New York soon; this is news to the Frasers, as is the fact that the newly issued Riot Act allows for the arrest of any man who was at the Hillsboro Riots or who was rumored to be there.

While Jamie is talking with Tryon, Claire attracts the attention of Phillip Wylie, the dandy we met at dinner in the Season 4 premiere. He’s even dandier now — face fully painted white, fake beauty mark on his cheek — and he clearly wants some of Claire’s action. She obviously has no interest… until while trying to impress her, he mentions that he knows a smuggler named Stephen Bonnet. She blanches upon hearing the name, then pretends to be interested in his silliness in order to gain more information on Bonnet’s whereabouts. 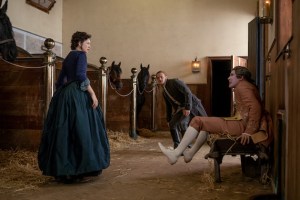 Unfortunately, this means following Wylie to the stable, where he wants to show off a horse he’s recently acquired. And by “show off a horse he’s recently acquired,” I mean he wants to introduce her to the pony in his tight, satin pants. She pushes him away, but he won’t be deterred. Fortunately, Jamie shows up in time to throw him against the wall and hold a knife to his throat. “Are you really going to kill someone at your aunt’s wedding?” Claire asks, and her husband backs down, letting the other man go with merely a death threat. On the way out, Wylie’s powdered face looks like the tragedy mask.

MUCH ADO ABOUT A RING | Then there’s a whole thing with Jamie gambling with Wylie in order to gain the connection to Bonnet that Claire had been trying to get, but it’s circuitous and gets clouded by the aforementioned dumb fight between Mr. and Mrs. Fraser. It all starts when Jamie asks for her gold ring (from Frank) to wager during a card game with Wylie. “Stephen Bonnet tried to rip this out of my throat,” Claire angrily reminds her husband. “If you’re going to take this, then you might as well take both of them.” Then she thrusts her two wedding bands into his hand and stalks off. 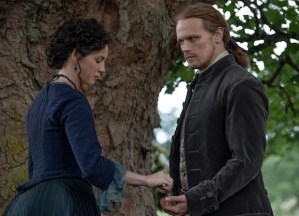 Here’s the thing: Even in the book, everything about Jocasta’s wedding is insanity. Everyone, including Himself and Herself, day-drink to such a degree that Jamie thinks nothing of strolling Claire to the edge of the grounds, rucking up her skirt and minting her julep, right then and there. Good lord, there’s even a murder that happens in the lead-up to the event.

So I’m not objecting to what happens during the ep, but more to what the writers chose to highlight and the way the script goes about depicting it. In the book, Claire and Jamie buzz about the festivities, continually thinking about how much they want to plow each other’s field at the end of the evening. Yes, they argue and it’s as outta nowhere as it is in the episode, but they get past it more quickly. And yes, when they reunite after Jamie’s card game, he’s won back her jewelry and he’s quite intoxicated, but their foreplay is somehow more bats–t yet less clunky then it plays out on screen. I give Sam Heughan and Caitriona Balfe credit for making the best of it — her shawl toss to signify it’s ON, in particular, is nicely done — but the scene where they make love up against the stable wall kinda feels like a Saturday Night Live parody of Outlander, up to and including the line, “Look down and watch as I take ye.” (I hope Heughan got combat pay for that one.)

Anyway, all is well in the afterglow, and we learn that Jamie got Wylie to arrange for a meeting between Bonnet and “Alexander Malcolm,” aka Monsieur Fraser himself. Speaking of Bonnet: Forbes meets with him in town and tells him that, “Your son is now the proud owner of River Run.” Oops.

Much later, Jamie gets even worse news from Tryon: No Regulators have taken him up on his pardon, so Fraser is to get his militia back together, because the war he thought he’d avoided is on.

‘I ONLY WISH I’D BEEN BRAVE ENOUGH TO SAY IT SOONER’ | Let’s end with the best, yet most heartbreaking, bit of the hour. Jocasta is in her chambers the night before her wedding when a guest shows up late: It’s Murtagh, and she’s overjoyed to see him. “You’re completely mad. Ye ken that,” she says as they embrace. “Aye, I suppose that’s part of my charm,” he says, all smiles.

He gives her a brooch like the one he wears, then says he can’t face the rest of his days if he doesn’t ask her something. THEN HE GETS DOWN ON ONE KNEE AND I LOSE MY DAMN MIND. “Will ye wait for me?” he wonders. But the question only makes Jocasta mad, as it should: She told him about the engagement early on, and he said nothing. “I didn’t think you’d say yes,” he quietly admits.

He puts her hands on his chest and reminds her that she knows his heart, even if he doesn’t always have the right words. Jocasta VISIBLY SWOONS, and I canna say I blame her. They kiss. It’s way hotter than anything that happens in the stable this episode, but it ends too soon. She apologizes but says she won’t pair up again with a man like her husband Hector Cameron, a Jacobite whose devotion to the cause led him to steal Stuart gold and make off like a bandit in the night after Culloden, and whose run-in with some Red Coats on the way to the New World directly caused the death of one of their daughters and indirectly caused the death of the two others.

Jocasta falls apart while telling Murtagh the story (which we saw play out in flashback at the beginning of the episode), then says that there’ll always be another war for men like him, and she just can’t bear it. Then she gives him back his gift and asks him to go.

“I love you, Jocasta MacKenzie. This world may change, but that will never change,” he says, leaving the brooch on a table in her room. “I only wish I’d been brave enough to say it sooner.” He leaves, and poor Jocasta cries a lot.