In these trying times, it helps to be thankful for the small things. So even though I remain pretty steadfast in my worry that Rome and Regina’s adoption is going to fall through in spectacularly painful fashion… who’s up for a baby shower?!

This week’s A Million Little Things celebrates Baby Howard-to-Be, ramps up to Eddie and Katherine’s vow-renewal ceremony and forwards Gary’s nascent relationship with Darcy (much to Maggie’s brokenhearted chagrin). Read on for the highlights of “Mothers and Daughters.”

DELILAH’S NEW ‘TRAINER’ | Delilah and Miles go for a hike and get coffee; they’re very flirty, and it’s clear they’re still very much into each other. But when one of D’s mom-acquaintances says hello at the cafe, Delilah panics. Miles rolls with it and introduces himself as her personal trainer; afterwards, he completely understands why she choked.

Much later, though, Maggie and Delilah are discussing Miles when Regina’s mom butts in and demands details about the widow’s “hot new guy.” Sophie overhears and stomps off, but her anger is short-lived: She understands when her mom says that she hadn’t mentioned Miles because getting back into dating is “weird and kind of scary. Then she asks Delilah to tell her about her new man.

SURPRISE GUEST | As someone who has sat through myriad baby showers and been the guest of honor at one of her own, I implore the women of the world: PLEASE do not play that disgusting diaper game at these events. It makes all of womankind look bad. (If you have no idea what I’m talking about, suffice to say the party pastime involves a variety of melted chocolate bars smeared into a series of Pampers, and it’s exactly as gross as you think it might be.)

Anyway, that game is underway at Regina’s baby shower when Eve shows up unexpectedly. Regina’s mom doesn’t understand how close the two women have gotten, but by the end of the hour, Eve has won over her child’s Grandma-to-Be. And for her gift, Eve gives Rome and Regina two things. First, she reassures a freaked-out Rome that his being her kid’s adoptive father provides her a great amount of comfort. Second, she hands the Howards an envelope containing the child’s gender: She doesn’t want to know, but she knows they do, so she got the info at her last ultrasound.

The couple wants to share the celebration with her, but she tearfully tells them that she’s got to break off any extra contact: She loves them, but being around them is too hard, she explains. “I can’t be in your lives anymore, not after the baby’s born,” she says, leaving them speechless. 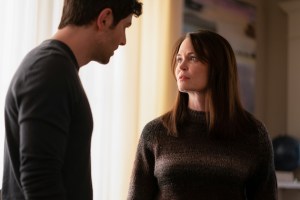 WHAT REALLY HAPPENED TO ALEX? | On the night that Lindsay and Eddie’s friend Alex died, the three of them were drinking and doing cocaine with Alex’s sister, Colleen, by the lake. But Eddie and Alex stayed later than the others; Lindsay eventually found him, soaking wet and asleep, by the waterfront. She snuck him home in the middle of the night, fearing they’d get in trouble with their parents. The next morning, the cops fished Alex out of the lake.

“You think I had something to do with Alex’s death?” he asks Lindsay, incredulously. “I don’t know,” she replies. “But you were the last person to see her alive.” Touché.

So Eddie becomes obsessed with finding out the truth before he and Katherine renew their vows, which is happening in, like, a day or so. His call to Colleen gets rejected rather quickly — she has no interest in rehashing the incident — so he and Lindsay drive up to the cabin and (I kid you not) stare at the water for a while until Alex and Colleen’s elderly father comes out and yells at them to leave the family alone. (Side note: If Eddie really doesn’t want any secrets to come between him and Katherine, and if their relationship is going so well, why doesn’t he just… tell her what’s going on?)

‘I’D KINDA LIKE TO HOLD YOU’ | Katherine learns Darcy and Gary are dating. Then Darcy helps her out when the electricity at her office goes on the fritz. Katherine is gone for a while when Maggie swings by to drop off some paintings from the apartment she’s in the process of vacating; she and Darcy meet, but neither knows the other’s relationship to Gary.

Eventually, Gary comes to the office, as well, where he and Darcy flirt their buns off. But when they both accidentally get locked in the electrical closet, the banter dies: Darcy has a panic attack so bad that Gary breaks the glass in the door just to get them out. Later, she explains that it all stems from her time in the service, and she cries while recalling a similar incident triggered by fireworks at a parade she and her son, Liam, attended. “I don’t know what to say, but I know I’d kinda like to hold you,” Gary says. Grateful, she lets him. 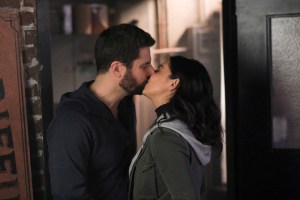 Later, she walks him home, and that’s when Gary chooses to tell her that Maggie wasn’t just a friend, as he’d led her to believe earlier in the hour. “Maggie and I dated. Actually, we lived together,” he says. “If I’m being completely truthful, she kinda broke my heart. And I want to be honest with you, because I really like you. And earlier,byou were so honest with me.” Darcy looks at him with a small smile on her face. “I kinda wanna hold you right now,” she says. They hug, then walk to his place and decide that they’re going to stay in for the evening. Then they kiss in his doorway… which is precisely when Maggie, who’d had a change of heart while listening to Cat Stevens’ “Don’t Be Shy” in her empty apartment, pulls up in a taxi. “Actually,” she says to the driver, holding back tears, “can you take me back home?”